Rumi: The Alchemist of Interfaith Tolerance

Toward the end of Candide, Voltaire writes in 1758 about a dervish saint who lived in Turkey without citing his name. In the novel, Candid approaches and asks the dervish: “Master…we have come to ask a favour. Will you kindly tell us why such a strange animal as man was ever made?

“When His Highness sends a ship to Egypt, do you suppose he worries whether the ship’s mice are comfortable or not.” The dervish answered. 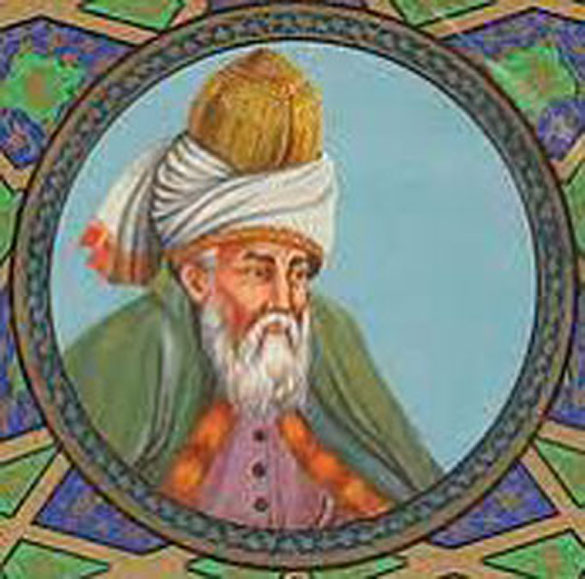 This dervish was Jalaluddin Mohammad Rumi, also known as Mavlana-i-Balkhi, the greatest metaphysical thinker and Sufi poet of all times. He was born in 1207 AD in Balkh, a northern province of Afghanistan, in a revered family of theologians with a long learned line of Islamic teachings. Following the brutal invasion of Afghanistan by the Mongol hordes, his father and Rumi—still a young child—were forced to flee their country and take refuge in Anatolia (Turkey)—at the time part of the Eastern Sultanat (Kingdom) of Roman Empire and then Byzantium.

Educated as a theologian and a grand mullah, Rumi was transformed into an ecstatic mystic poet after he had met a Peripatetic Sufi, Shams in 1244. Shams became a male Muse for his entire poetic creation. Their first meeting was a great episode in the world history of mysticism. Like Beatrice who in The Divine Comedy, encounters Dante at the top of the earthly paradise, legendary Shams encountered, by chance, in an oriental bazaar Rumi who became heart and soul of his Divan of 2,500 long odes, his opus magnum. Rumi’s poetry was indeed as Coleman Barks says, like “eavesdropping” on this cosmic meeting and a few years friendship between the two.

In Rumi’s poetic parlance Shams is often referred to as, “O Shams, If I see anything but God in your bright and sparkling mirror, I would be worse than an infidel”, “My Shams and my God”, “Only love know you [Shams], not intellect”, “What I thought of before as God, I met today in a person (Shams)”, “For Shams’s Love, like a wandering particle, I am a restless and lost insomniac”.

As the labyrinth of suffering and injustice and fever of war is raging in our world today, the West looks upon the East for inspiration as Voltaire did in his turbulent age. For our age, Rumi’s poetry offers the remedy for the apocalyptic hysteresis of our time. It is the prime reason why Rumi is becoming increasingly popular in the West. The medieval poet is loved and read in the West and he still is a bestseller in the US. His ideas and poetic legacy still haunt universities, pubs, spiritual industries, valentine day, theatre, opera, ballet, film etc.

The “Excellent Rumi,” as Hegel called him, has always been loved and cherished by poets in the West more than anyone else. He inspired leading Western poets and thinkers such as Dr Johnson, Goethe, Emerson, Walt Whitman, Robert Grave, Doris Lessing, to name but a few. For the German poet Hans Meinke Rumi was “the only hope for the dark times we are living in”. And the French writer Maurice Barres remarked, “When I experienced Mevlana’s poetry, which is vibrant with the tone of ecstasy and with melody, I realised the deficiencies of Shakespeare, Goethe and Hugo.”

Besides his poetry, the ritualistic dance, Whirling Dervishes, is another charm that has made Rumi a household name in the West. The esoteric dance—introduced to Europeans first by Danish fairytale writer, Hans Anderson—induces a spiritual trance within Western audiences. This dance is where like Whitman he celebrates the Aristotelian notion of the unity of body and soul. In this dance the spirit speaks through the body. Body for him was like Stoics and contemporary French theorists not a prisoner of the soul, but it’s very essence, substance and vehicle. Through music bodily movements and chanting the Rumi dancers achieve spiritual wholeness and harmony.

The first great thinker who popularised Rumi in Europe, especially in the English-speaking world was his fellow compatriot, Idris Shah who translated many works of the poet into English. In his remarkable book The Sufis, Shah writes, “Jalaluddin Rumi, who founded the Order of the Whirling Dervishes, bears out in his career the Eastern saying, “Giants come forth from Afghanistan and influence the world.”

Rumi and Idris Shah himself were among the great inspirations for Western esotericism, New Age in the 1960’s. Rumi’s spiritual doctrine of God as an apex of a pyramid with numerous paths leading to it was adapted by the New Agers. This led within the movement to the notion of unity and harmony between all religions of the world. With the help of a spiritual master, one can get access to such a high consciousness and a cosmic energy beyond human physical faculties. However, Rumi warns his disciples not to fall into the dungeon of a pale imitation of spirituality: “At first enlightenment comes to you from the Adepts. This is imitation. But when it comes frequently, it is the experience of truth.” We in the West must be on the alert against some charlatans and the exploiting spiritual industry who try to fool us with a false sense of spiritual fulfilment.

Finally, Rumi bridges Islam and the West at this hour of mistrust, created by the psychosis of terrorism in some Islamic countries and the igno (arrogance) of some Western powers that through a sweeping generalization equalize Islam with terrorism. One has to read Rumi to learn the true spirit of Islam:

Come, come, whoever you are, come and come again,

If you are an infidel, a fire worshipper, or a Buddhist, Come.

Our conviction is not of despair,

Come, come again, even if you broken your repent a hundred time.

Rumi lived in a time of religious war and he tried to serve as a uniting figure among the followers of all faiths. Among his pupils were Muslim, Christians, and Jews. He loves them all and he related his teaching to all religions:

What is to be done, O Muslims? For I do not recognise myself

I am neither Christian, nor a Jew, nor a fire-worshipper, nor Muslim

I am not of Nature’s mint, nor of the circling heavens.

I am not of India, nor of China, nor of Bulgaria, nor of Saqsin

I am not of Iraq, nor of Khurasan (old name of Afghanistan)

My place is the placeless and my trace is the traceless.

When Rumi died in 1273 in Turkey, followers of all faiths were mourning and wailing. According to Rumi’s biographers, in (at his) his funeral someone asked a Christian who wept so bitterly at the death of Rumi, “Why are you crying at the funeral of a Muslim poet?

“We esteemed him as the Moses, the David, the Jesus of the age. We are all his followers and his disciples.” The Christian replied.

The excellent Rumi is now a favourite in American, and if we believe Coleman Barks, Rumi’s grand translator, today more Americans read Rumi than Shakespeare. What lies behind this passionate love of Americans for Rumi?

I think we may certainly find the answer to this again by looking at Candide, for Voltaire’s novel has been the best literary reflection of a turbulent area in human history when religion was used as a masquerade for heinous crimes and genocide in Europe. For Voltaire, his era was a time when “devil…rules the roast here and everywhere.”

Candide in the novel refrains from going to England after he has seen a horrific scene. A stout admiral is brought to execution for he didn’t have enough dead men on his record. The execution was also carried out in order to encourage other officers to kill more and more people.

“The waterside was crowded with a host of people who were gazing intently at a stout man kneeling, with his eyes bandaged, on the deck of a man of war. Four soldiers stood opposite him and fired three rounds each into his skull with the utmost composure, at which the crowd dispersed evidently quite satisfied.”

Nowadays religion veils killings everywhere. Al-Qaida uses Islam as a cover for its dirty culture of killing and even justifies its political ideology as a reflection of Allah’s scripture. On the other side of the Atlantic, some extremists under the Bush administration use Christianity as a tool to justify their cruel invasions.

So, the first reason for the American people’s love for Rumi arises from the demand of our time. Religion, which was traditionally the source of spiritual wellbeing, is being hijacked by big powers and terrorists. It is worth mentioning that Rumi is Sufism is not favoured in Saudi Arabia, because for Islamic fundamentalists, Sufism is something old and useless. In Saudi Arabia the teachings of many Sufi philosophers are banned at schools and universities.

The second reason for the American peoples love for Rumi is certainly the poet’s dense erotica, permeated in his love poems. Rumi like all other mystic poets thought his erotica was not for sexual desire but a way of expression for mystic love of God. In Sufi symbolism known as Shathyaat, sexual references such as love making, drinking wine, kissing, etc have an underlying symbolic meaning. Rumi’s eroticism and mysticism is closer to Georges Bataille, but with a big difference. Rumi’s love poems never teach moral transgression, guilt or masochism. Rumi’s mystic love is very close to John Donne’s poetry. For both, love arises from separation and in the meantime a vehicle for reunification. Rumi’s love is both poison and antidote.

However, today’s literary theory would not accept Rumi’s justification and symbolism. In this context, Rumi’s eroticism would be given a textual treatment far from what the poet claims. In today’s poststructuralist theory, as Derrida said nothing is outside the text, so, Rumi’s symbolism or Shathyaat is nothing but an internalised denial like courtly love is held in the West.

In my hallucination I saw my beloved’s flower garden

In my vertigo, in my dizziness, in my drunken haze,

I saw myself as the source of existence,

I was there at the beginning and I was the spirit of love,

But American love doesn’t last long as Freud once said. Once Freud was worshiped in American but the love withered away. Will Rumi’s love in America last longer? We don’t know. The future will ultimately answer this.