Sacred Mysteries: The Quran, Mary and the Annunciation 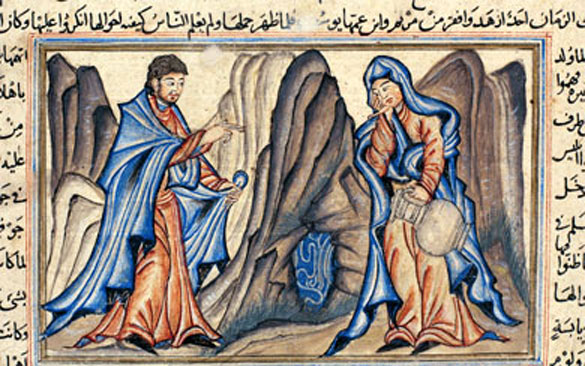 The Annunciation, a miniature in The History of the World by Rashid al-Din CREDIT:  BRIDGEMAN ART LIBRARY

In the Quran, Mary the daughter of Imran is brought up as a girl in the Temple. Zachariah (the future father of John the Baptist) goes into the sanctuary and finds that she has provisions. Asked where they came from, Mary answers: “From God. God gives provision without reckoning to those whom he wishes.”

The Quran gives the same account as in St Luke’s Gospel of Zachariah being struck dumb before the birth of John. But the story of Mary living in the Temple and receiving provisions from God is in none of the four Gospels. It is however found in the Infancy Gospel of James. This was not admitted into the Christian canon of inspired books, but did give subjects for artists through the centuries.

In this book, from the 2nd century, Mary is said to have been chosen to spin textiles to make the veil of the Temple. She is also said to have first heard the voice of the angel Gabriel while she was fetching water. Her conver­sation with the angel (drawn from St Luke’s account) finishes back home while she is spinning thread.

The Quran insists on the virginity of Mary when she conceives her son Jesus, whom the Quran calls Messiah. God will teach him “the Scripture and the Wisdom and the Torah and the Gospel”. But the Quran forcefully states that although Jesus is a prophet, “God is not one to take to Himself any son.”

There is a fascinating miniature (above) in a manuscript from about AD 1307 of The History of the World by Rashid al-Din, now in Edinburgh University Library. It shows on the far side of a stream the angel Gabriel, with the appearance of an ordinary man, addressing Mary, with a pitcher, her eyes cast down. It is probably the only image of the Annunciation in an Islamic manuscript, according to the art historian Sarah Drummond in an impressive new book.

In Divine Conception: The Art of the Annunciation, she looks at representations of the Annunciation under 12 categories, such as the metaphors for Mary’s virginity, the role of Joseph and Mary’s occupation. I had not realised until I read her chapter on Mary working with the spindle that this way of depicting her derived from the Infancy Gospel of James. I had assumed it was simply a likely occupation for her to have been busy with when the angel arrived.

Mary is shown holding a spindle in the mosaics that flank the gloriously tranquil 12th-century image in the main apse of the basilica at Torcello, in the Venetian lagoon, showing Mary holding the Child Jesus.

The Torcello images derive from a Byzantine tradition, as does a panel 8in high from the spectacular ivory throne of Maximian, the Archbishop of Ravenna from 546. The throne is still on show in Ravenna, where a mosaic from the period, in the church of S Vitale, shows Maximian wearing the pallium, the wool scarf sent him by the Pope as a mark of his authority. He stands next to the Emperor Justinian, who perhaps presented him with the throne, the symbol of his teaching office.

Sarah Drummond also looks at the artistic convention of showing a tiny child sailing down a beam of light towards Mary at the Annunciation. It seemed like a good idea to 13th-century European painters. But in the 18th century, Pope Benedict XIV squashed this convention on the grounds that the body of Jesus was only formed in the Virgin’s womb once the Holy Spirit had exerted his power.

To understand the art of the Annunciation I can’t think of anywhere better to start than with this book.