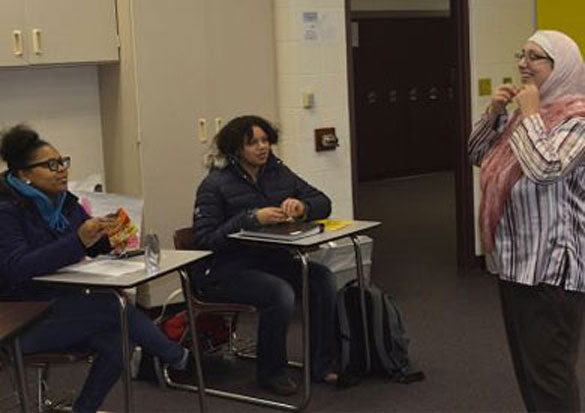 The Monday after the 2013 Boston Marathon bombings, Sairah Ahmed went to teach her history classes at Cedar Springs High School with a heavy heart. Like her, the two terrorists were Muslim, but she felt no connection whatsoever to them or their beliefs.

Along with feeling the shock of mass violence, she recalled, “I would have been emotionally healthier to process that event with my students if (the perpetrators) were not Muslim.”

Whenever a terrorist attack is carried out in the name of Islam, Ahmed can be so depressed that it’s hard for her to get out of bed. But she does so, wearing the Hijab headscarf that makes her faith visible, wondering if any of her students or colleagues could ever associate her with such hate.

Beach had set the ambience for a discussion of Islam, one of the five major religions he covers in his History of World Religions Course at Rockford High School. Icons and symbols of the others adorned the walls: the Buddhist wheel of enlightenment, a Jewish prayer, the seven deadly sins according to Gandhi, the genealogy of Jesus Christ.

Then she steps into the classroom to teach, and acknowledge her hurt.

“I usually bring that personal point to them: ‘This is really hard for me. This is not a good day for normal-thinking Muslims,’” said Ahmed, a 13-year teacher of world and U.S. history. Then she will help students process the terrible events of the day in light of extremists throughout history who have used religion to cloak their personal agendas.

Fortunately, Ahmed doesn’t address religion only after terrorist incidents. She weaves it into her history courses as a way of helping students know their world.

‘ISIS is Against Me Too’

Grand Rapids-born and a graduate of Kelloggsville Public Schools, Ahmed brings a rich background of faith and academic expertise to teaching her mostly Christian students. She aims to impart an appreciation for religious diversity and its importance in world affairs.

“It’s so precious,” she said at the end of a recent school day. “Learning and studying religion is such a beautiful thing.”

It’s also necessary in order to place historical events in proper context, said Ahmed, who minored in religious studies and majored in history at Michigan State University. She draws parallels between today’s religious violence to events such as the Holocaust and the Hundred Years War, and the attraction of groups such as ISIS to the rise of Nazism.

Looking to the past can help students make sense of today and overcome fear with logic, she said.

“We have a lot of fear right now about terrorism,” said Ahmed, the mother of two young children. “I tell my students ISIS is against me too, an educated Muslim woman. If they were to attack a building, they would go for me first. It’s not logical to be scared of all Muslims when we’re fighting a common enemy.”

She gives an overview of all the major faiths at the beginning of the year. She also explains right away that she wears a head covering in public as a dress code of modesty, and acknowledges she is a Muslim with biases just as a teacher of another faith would have.

“I think they’re the better for it, if they can be exposed to somebody from a different culture (who teaches) the same way anybody else would,” she said.

Ahmed said she’s heard few negative comments at school about her faith, but has had lots of rewarding discussions with students.

She asks them to temporarily suspend their own religious judgments to learn the teachings and appreciate the similarities of all major faiths. And she tries to counteract cultural hatred against and among religions with more realistic views of what they actually stand for.

“I hope to plant a seed of understanding, a seed of respect, for different cultures and values,” she said. “There isn’t any religion that preaches hate. God is love, and that’s preached in every religion.”