In Celebrating Festivals, India Has Rich Traditions of Communal Harmony 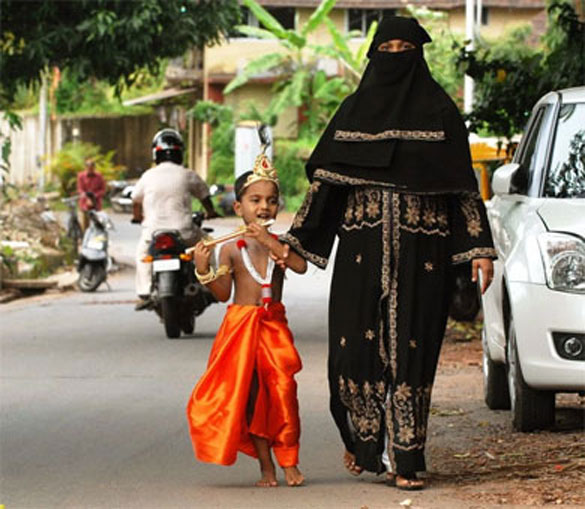 The recent decision that Muslims will join their Hindu neighbours in pulling the Raghunath chariot in the famous Kullu Dussehra of Himachal Pradesh is just one example of the many ways in which people of various communities have been coming together to celebrate each other’s festivals. In fact, there has been a rich tradition of performing the Ramlila or a dramatic representation of scenes from the Ramayana even in some predominantly Muslim countries like Indonesia, as well as in Buddhist countries.

India’s former ambassador to Cambodia, Gaurishankar Rajhans, recently said that during his tenure in 1996, the Cambodian government organised a festival of Ramlila teams from various Asian countries, with enthusiastic participation from Indonesia, Malaysia, Thailand, Vietnam and Laos, as well as Cambodia and India, and some smaller countries with different religious backgrounds. The celebration was attended by the prime minister as well as Cambodian rebel leaders.

Some of these traditions are rooted in history. Most people were happy but also surprised to read the recent news that the trust of the famous Hanumangarhi temple of Ayodhya invited Muslims to rebuild a dilapidated mosque on its land, even agreeing to bear the costs. The trust has also welcomed Muslims to offer namaz on the premises. Those familiar only with the violence of recent times were surprised by this, but history reminds us of the rich tradition of harmony in Ayodhya when the nawabs of Awadh had liberally granted land and other support for the Hanumangarhi and other temples. This tradition of harmony is also reflected in the thoughtful planning of the present-day Aishbagh Ramlila grounds in Lucknow, where the Nawabs provided adequate place for religious activities and ceremonies of all faiths.

Such traditions of contributing to religious places of other communities strengthened social harmony, such that the possibilities of joint celebration of religious festivals in the courts of various royals increased. At the famous Hindu pilgrimage centres of Chitrakut, Mathura and Vrindavan, some temples and religious institutions have records representing grants made by Muslim kings. In a study based on these and related documents, historians Tarapada Mukherjee and Irfan Habib have shown in Akbar and the Temples of Mathura and its Environs that Akbar enlarged and consolidated grants to temples in Mathura by his Firmaans issued in 1598. On the other hand, Hindu kings like Shivaji were also liberal and generous in building mosques and paying respect to Muslim religious elders. In his book Shivaji – the Portrait of a Patriot, historian V.B.Kulkarni writes, “Shivaji’s veneration for other faiths was as profound as for his own. He showed the highest respect for the holy men of Islam and of Christianity. He looked upon Baba Yakut of Kelsi as his honoured friend and benefactor, while a number of Muslim shrines received liberal endowments from his government.”

Such historical facts indicate a rich tradition of communal harmony, which was reflected in several royal courts as well as in the daily life of common people. Travelling in some remote villages of eastern Uttar Pradesh on Muharram a few years ago, I expressed my surprise at seeing so many Muharram processions even in the rural areas, where the Shia population was relatively small. The jeep driver, a local, told me that most of the people in the processions are actually Hindus of the same village and have come along so that the procession doesn’t look so small.

Disha is a social organisation working on justice-based issues for several years in parts of UP’s Saharanpur district, known for its mixed Hindu-Muslim population. Disha secretary Keshvanand Tiwari has always accorded high priority to social harmony. He says, “We celebrate Holi and Eid together and it is always a joyous occasion. The serving of food after Roza fast is often arranged by Hindus, including Dalits. Festivals of Dalits including Sant Ravidas Jayanti and Valmiki Jayanti are celebrated by Dalit and non-Dalit Hindus and Muslims together. We are also all together on Ambedkar Jayanti. As we are together on so many festivals our joys are more and our sharing of our joys is also more. This opening up enables us to experience more happiness in our life and to share more happiness with everyone regardless of religion or caste.”

Naseema, a senior member of the organisation and who has been a part of several such celebrations, says, “This broadens our vision. All narrow considerations are overcome. We realise that we are all equal members of the same humanity. All divisions are artificial.”

Describing such rich traditions in the Indian army, retired Lieutenant General Syed Ata Hasnain recently wrote, “The Jammu and Kashmir Light Infantry which has its training centre at Srinagar comprises Dogras, Sikhs and Muslims in near equal segments. It follows the unique Mandir Masjid Gurdwara concept, all under one roof, and is extremely proud of that.” The general has further given the example of a Hindu company commander in a Muslim Grenadiers unit who used to keep all the 30 Rozas with his men and even read all five Namazis which he knew perfectly.

It is true that such celebrations have been damaged and reduced in recent times by narrow sectarian propaganda. Planned efforts would be one way to maintain and revive such traditions.