The world was shocked when news came about riots in Rakhian state (Arakan) of Myanmar between Rohingya Muslims and Buddhists in which more than 100 Muslims have been killed and property worth millions have been destroyed. AMAN (Asian Muslim Action Network) which has Asia wide network decided to intervene and bring about peace in Myanmar (Burma) which, otherwise, has been a peaceful country.

It was decided to have an inter-faith dialogue between three principal religious communities of Myanmar i.e. Buddhists, Muslims and Christians. There are around 10 per cent Muslims in Myanmar and about 20 per cent in Yangon (formerly known as Rangoon). Yangon was formerly the capital but now it has shifted and it is largest trading and business centre now.

The interfaith dialogue was organized in Yangon, a middle sized beautiful city which is quite clean and green. Its population is around 6 million i.e. half the size of Mumbai. It is much less congested and has lot of greenery coupled with slow pace of life. Unlike Mumbai it has not high rise buildings the highest being two hotels with 25 stories other buildings have 5 to 15 floor. Muslims at one time were quite influential being mostly traders. Lot of Muslims had gone from Surat and still there is a beautiful Surti mosque.

Muslims in Myanmar are highly diverse. There are very few ethnic Burmese Muslims; most of them are migrants from different parts of India when Burma was a part of India. There are large number of Tamil, Gujarati and Bengali and Bohra Muslims and very few Urdu speaking Muslims since Urdu speaking are not in business. Now all Muslims speak Burmese language. These Muslims, in addition to their Muslim name have Burmese name too and publicly they are known by Burmese names only and within their own community by Islamic name. For example, a person has Chitko O-O as Burmese name and his Islamic name was Mohammad Nasiruddin. Similar tradition is followed by Thai Muslims too. 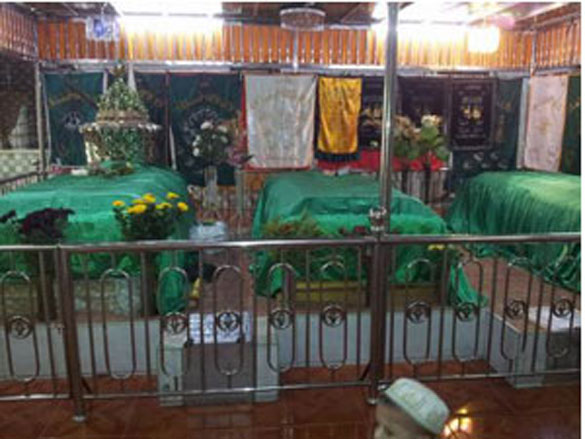 There are two famous spots in Yangon i.e. grave of the last Moghul King Bahadur Shah Zafar and the Biggest Buddhist Pagoda in Burma. I visited both the spots. Bahadur Shah Zafar’s grave is now inside a mosque built by Government of India. His original grave was found only when they were digging for the mosque in 1992-93. The British had buried him secretly and a symbolic grave – large in size – was built in another corner. Both the graves exist today. I visited Bahadur Shah Zafar Grave and paid my tribute to this great freedom fighter of India. It is very well kept.

The golden Buddhist pagoda is a famous place of pilgrimage for Buddhists and a great tourist attraction. It is indeed a complex of several big and small pagodas and is always crowded by visitors. Most of the buildings are gold plated which adds to the charm of the buildings. It is surrounded by lush green trees. One feels at peace in this complex. It is sad that in this country of Buddha human blood was shed and no one knows how many people died. Buddha’s compassion turned into Buddhists’ wrath. There is always a great distance between religious ideals and what followers do.

Burma, as pointed out before, has been a peaceful country and all three principal religious communities have been living peacefully there and going their respective ways. The military take over only aggravated the situation in Arakan, a western province. On the first day I reached in Yangon i.e. on 22nd June in a Christian educational institution. I elaborated on the concept of inter-faith dialogue and the intention behind it. Dialogue is to understand each other, not to convert the religious other to our point of view. To try to convert destroys the very spirit of dialogue, I said. I threw detailed light on the concept and need for dialogue between various religious and cultural communities. 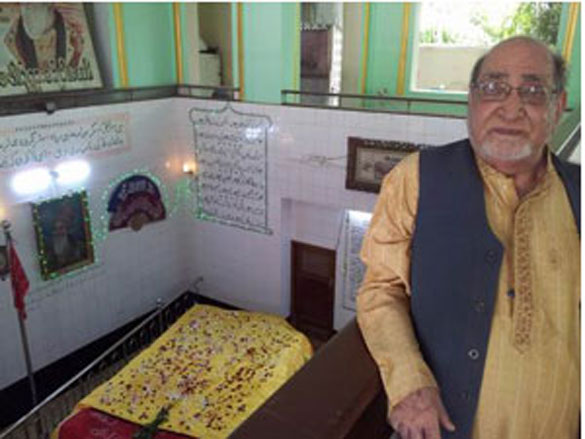 I found that it was not correct to say that some Muslims raped a Buddhist girl. In fact what happened was that a Muslim boy was in love with a Buddhist girl and both married and eloped to avoid wrath of local people. Two other Muslim boys helped them in arranging marriage and also to elope subsequently. It was very similar to what happened in Jabalpur in 1961 when a Muslim boy fell in love with a Hindu girl and decided to marry and a strong rumour spread that he raped the girl and worst riots broke out in which more than 100 persons were killed and properties worth crores were destroyed.

Similar thing happened in Rakhian province also but this was only an apparent cause the real cause is of citizenship of Rohingya Muslims. I will throw some light on that little later. All three boys were arrested by the police and one who had married the Buddhist girl was killed in the police custody and many Rohingya Muslims believe that he was deliberately killed by torturing him. 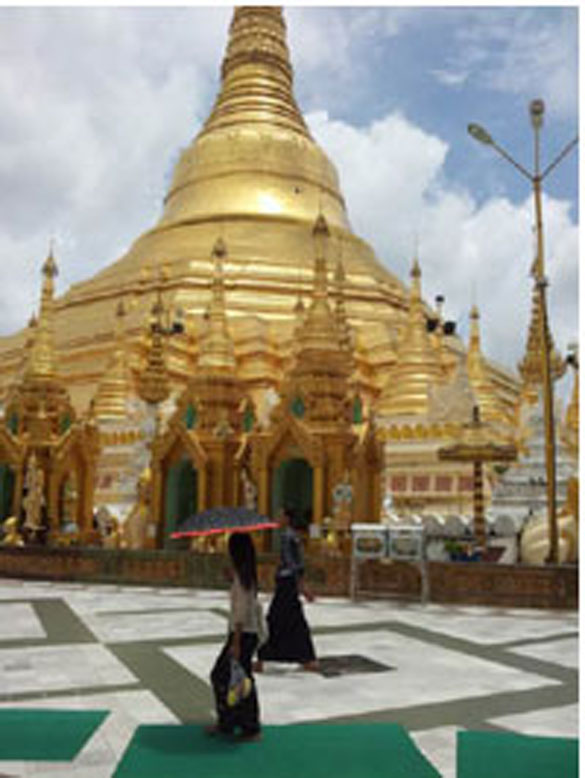 What is much more shocking is that the two other boys who had helped the Muslim boy to marry have been sentenced to death and are to be executed. This can happen only under military dictatorship, not in a country where there is rule of law. How can such trial which condemns people to death within a few days be just? It takes months, even years, to complete the judicial proceedings to sentence someone to death. This proves how violative military dictatorship can be of human rights.

The immediate task before the Muslims in Burma is to save the lives of these two boys who are awaiting their execution. Hectic consultations were going on among the leaders as to what steps should be taken. I advised them to engage good layers and file an appeal in higher courts and also to approach human rights organizations like Amnesty International to launch a campaign.

The other question is of rendering relief. The Government does not allow anyone to take relief directly to the people but insists that the relief material be handed over to its agency and Muslims maintain they do not trust Government agency whether it will reach the affected people at all. Thus the Rohingyas are suffering. They are in urgent need of relief but there is no way relief by voluntary agencies can reach them.

The Rohingyas – those Muslims who live in Rakhian state (Arakan) have historically been coming to that state from outside as many Muslims had settled in other parts of Burma, especially in what was earlier known as Rangoon. Once this state Arakan was ruled by Muslims and hence many Muslims came over there and settled there. But the present Myanmar military government maintains that most of them are recent settlers and hence does not recognize them as citizens. But Rohingyas maintain that they have been there for more than 100 years.

It is very much like our Assam and Bangla Deshi problem. The AASU leaders had alleged that the Bnagla Deshis are settling in Assam and soon they will be in majority and ultimately Nelli riots took place in which around 4000 Bengali Muslims were killed. The Bengali Muslims also maintained that they were not recent infiltrators as alleged but have been there since thirties of last century or even earlier and they and their children have gone to Assamese schools.

The Military Government of Myanmar refuses to recognize them as citizens of Myanmar. But these Muslims maintain that until 1982 there was no problem and they used to vote in all elections and then they had five ministers in the national (Federal Cabinet) from Arakan state. Many of these Muslims are working in other countries like Saudi Arabia but do not have Burmese passport.

They illegally cross to neighbouring Bangla Desh and obtain passport from there (illegally) and go and work in the Gulf countries. It is estimated that there are nearly half a million Rohingya Muslims in Saudi Arabia on work permit. Many Rohingyas even in Yangon have no citizenship papers. They have been given identity cards but no passport. Thus this is main problem which is causing conflict.

The violence erupted because of this irritant the elopement of a Buddhist girl was merely a spark. The local Buddhists resent presence of Rohingya Muslims like the AASU resents so called ‘Bangla Deshi’ Muslims in Assam. India is at least a democratic country and the problem could be tackled democratically and hence Mrs.Indira Gandhi tried but it was neither to the satisfaction of Bengali Muslims nor to that of Assamese people. But in Myanmar there is no democracy and hence Aung Suu Kyi said we cannot resolve this problem unless there is democratic government and citizenship rights are decided according to the Constitution. At present there is no constitution at all. The problem thus will continue.

Asghar Ali Engineer is an Islamic scholar who also heads the Centre for Study of Society & Secularism, Mumbai.

Centre for Study of Society and Secularism, Mumbai