Ali Nadwi and the Theology of Anti-Pluralism 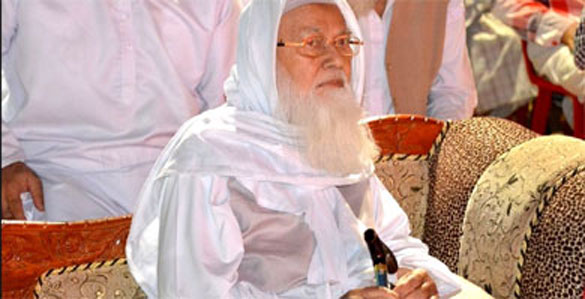 Abul Hasan Ali Nadwi (1913-1999), the rector of the famous madrasas at Nadwa at Lucknow is considered as one of the most influential Ulema (plural of Alim, scholar) in the Muslim world. His fame and contribution to Islamic knowledge is not just recognised in the Indian subcontinent but also in the larger Arabic world. In India, Nadwi is often portrayed as someone who believed in the efficacy of the secular Indian state as well as being an ambassador of Hindu Muslim unity. It is not surprising therefore that when he was alive, politicians of various hues made a beeline to seek his blessings. The problem however is that even a cursory analysis of his writings reveal a distinct bias in favour of Arabic and Islamic superiority which hardly augurs well for a composite living together between different communities in India, particularly amongst Hindus and Muslims.

It was a result of this fostering of Arabic and Islamic superiority that Nadwi was awarded the King Faisal prize in 1980 by the Saudi crown. It must be mentioned here that the same prize was bestowed upon Maududi and more recently to the televangelist Zakir Naik for their so called contribution to Islamic sciences.

[Abul A’la Maududi, the founder of Jamaat-e-Islami, is considered one of the two founders of modern Islamist terrorism, along with Syed Qutb of Egypt. Zakir Naik is a Saudi-supported Indian Ahl-e-Hadithi preacher, very popular in the Muslim world today.]

A little bit of historical context becomes important to understand how Nadwi became one of the favourite Alim of the Saudi establishment.

Nadwi was the founding secretary of the Muslim World League founded in 1962 at Mecca by the Saudi state. While the ostensible reason for the establishment of Muslim World League was to promote inter-religious dialogue, in reality the League acted as an important arm of the Saudi foreign ministry with the express intention of promoting Wahhabi thought and practices within the Muslim World. As a recognition to the contribution of Nadwi in establishing this platform he was handed over the keys of the two holy mosques by the Saudi King. Nadwi’s contribution to Islamic sciences and his loyalty to the Saudi crown therefore went hand in hand.

Nadwi didn’t have to go too far to search for inspiration of an authentic Arab Islam; he just had to look for it within his family. The best known member of his family was Syed Ahmad Barelwi who had organized a movement for puritanical reform within Islam which had distinct similarities with the Wahhabi movement in Saudi Arabia.

In his autobiography, Karwan e Zindagi, Nadwi notes that the association with Syed Ahmad Barelvi was a matter of great distinction for the family. His family saw itself as an inheritor of this reformist and puritanical movement. Among other things, this meant being antithetical to the local and popular forms of Islamic beliefs and practices as well as being anti-Shia, which were particularly strong in the Shia dominated Lucknow where Nadwi family had come to settle. In fact, Nadwi speaks with some pride that the neighbourhood where his family resided was popularly known as the Mohalla of Wahhabis because it was one of the few which was inhabited by people of ‘right belief’. It is hardly surprising then that the Nadwi’s first major intellectual undertaking was a biography of Syed Ahmad Barelvi and his so-called reformist movement. This was a theme to which he would later return frequently in his many writings.

The notion of Arabic superiority was embedded within Nadwi’s writings. Through this latent racism perhaps, Nadwi was also proclaiming the superiority of his own Arab lineage. The Arabs were considered as a model to be emulated, far superior to Indian Muslims. Thus right from the very beginning, students at Nadwa were moulded to become part of this Arabic world, most importantly through the Arabic language which was considered as the most authentic language in which Islam could be expressed. The Nadwa always considered Arabic as the language in which its students were to be socialized. The idea was that Islam and its ways could only be appreciated through the language of Arabic thus in a sense jettisoning the lingua franca of North Indian Muslims which was Urdu.

Students at Nadwa were trained to debate in Arabic with the idea that they should be able to converse with and impress any Arab. More interestingly, students of Nadwa were to have an ‘Islamic dress which would be modelled on the dress of respectable Arabs’. Not only this, students were supposed to dine in an Arabic manner. What precisely it meant by Islamic dress and Islamic way of dining was not clear but what became clear through these prescriptions was that Arabic ways and customs were considered far superior to the Indian ones.

This negative attitude relating to all things Indian can only mean that there was no attempt on Nadwi’s part to develop a theology which was contextually dependent on the Indian situation. The culturally alienating theology of Nadwa therefore was responsible for much symbolic violence on its students who were being socialized into an ideology which demeaned their own Indian roots and civilisational heritage. The implications for pluralism was ominous and Nadwa duly contributed to it, not just through the writings of Nadwi but also through what it inculcated amongst its students in the madrasa.

In his book, Muslims in India (1980), Nadwi talks through the language of power highlighting the exalted status of Muslims vis-à-vis the nation (read Hindus). In his scheme of things, the coming of Islam and Muslims marked the beginning of an era of enlightenment, progress and prosperity in India’s history. He signs off by saying that it would be better if the Hindus do not forget the ‘gratitude’ that they owe to the Muslims.

Thus the Muslims, because of centuries of living among the Hindus, had adopted customs and practices which were clearly un-Islamic and which must be repudiated for bringing back the glory of Islam and Muslims.  In his other work, The Musalman (1977), he terms Muslim practices during certain festivals like Muharram and Urs to be completely un-Islamic which has no sanction anywhere else in the Muslim world, particularly within the Arabian heartland. This exercise of measuring religious practices of a community through an Arabian standard places the majority of the Indian Muslims under the need of express reform. In fact Nadwi expresses satisfaction when he notes that some of these seemly un-Islamic customs are being given up due to the increasing influence of Islamic education. Thus we see that in Nadwi, Islamic superiority is coupled with the need to curb internal plurality within Muslims.

What an irony then, that even as Nadwi is credited as someone who tried to foster mutual understanding between Hindus and Muslims, in his writings, what is Indian about Muslim culture turns out for the most part not to be “Islamic” at all. Nadwi is at pains to emphasize the loyalty and devotion of India’s Muslims to the nation-state as well as the need for communal harmony between Muslims and Hindus. But this harmony is predicated not on similarities between the two communities, still less on a religious and cultural symbiosis; it is predicated rather on a recognition of their distinct, immutable identities. Such a methodology hardly augurs well for a composite living together of Hindus and Muslims. Rather, in Nadwi, what we get is a distinct politics of anti-pluralism predicated on a disdain for Hindus and an unquestioning superiority in all things Arab and Islamic.

A newageislam.com columnist, Arshad Alam is a New Delhi based writer