Resurrect Mutual Religious Respect - Do Not Redefine, Abuse and Find Fault with Other Religions and Sects

1.    The most heinous crime that humankind is engaged in these days is that of finding faults with other’s religions and sects.

2.    Our religious leaders and the human rights organisations should have applied a brake to at the very first instance of finding fault with other religions and sects, but they did not. In fact many religious leaders actually encourage it.

4.    The social organisations fighting for the religious rights of the people seem to have gone bereft of ideas on how to bring the situation back to normalcy. 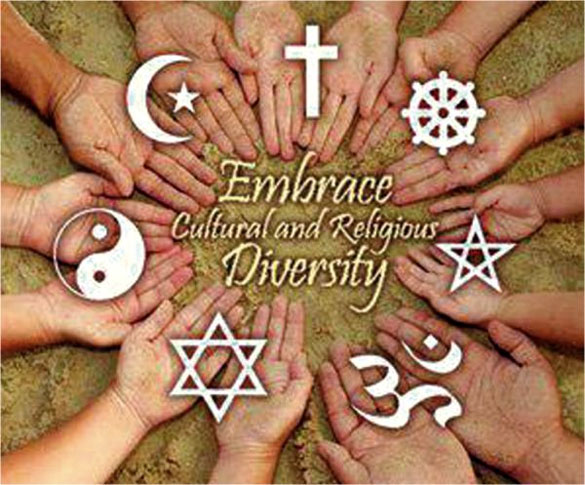 The most heinous crime that humankind is engaged in these days is that of finding faults with other people’s religions. This is one thing that our religious leaders and the human rights organisations should have applied a brake to at the very first instance but they did not. Counting reasons behind the fast-spreading hatred for religions now is nothing but wasting time. Some among us even played with the idea and used the occasion to divide the communities into faith lines and rules. Now, this has taken a mountainous form underneath a volcano to erupt and destroy humanity.

Those who were and still are busy baking their bread in the destructive religious fire engulfing the world are still to understand the consequences it has generated.  The social organisations fighting for the religious rights of the people seem to have gone bereft of ideas of bringing the situation back to normalcy. Had they had the minimal idea of the shape religious hatred, they are creating, will take, perhaps, had not done this. The wave of religious hatred has reached nook and corner of the world but no problem cannot be solved. It is said that Allah creates the solution before the advent of a problem.

To decimate the fire of religious hatred humankind will have to search for the solution in the religious epics, sayings of the prophets, the incarnations and the Sufis and Saints, Rishis and Munis. It is a known fact that destructive forces are more powerful than constructive ones but ultimately one gets Allah’s help in everything good that His creation does. Therefore, bringing the mutual religious and faith respect back to normalcy will be tough but fruitful.

Mutual religious and faith respect will introduce the world to the ethics of pluralism that is ingrained with love and brotherhood. Our baseless hatred for others has sucked the beauty of the world and turned it into a jungle at the fire.

The destructive forces forced us into finding faults in our religions and faith, knowing well that religion is a part of our life and that humanity can be divided and pierced into pieces only with religious hatred seated in the hearts of those who matter. We submitted ourselves to the irreligious practices of abusing and finding faults in one another’s religions and it’s social and cultural teachings.

In Islam they went after the war verses, knowing well that these are related to the times of their revelations such as the verses of the Bible and Shlokas of the Mahabharata and Bhagwad Geeta. Their dirty trick worked because the targeted common man is unknown to the fact. The common man will have to be taught about their respective religious epic’s teachings of peace and respect for other’s religions and their duties towards their Creator.

Every Potter Praises His Pot

There is a saying in Hindi, ‘अपनी दही को कोई खट्टा नहीं कहता’, and it means every one of us praises its belongings no matter how bad it is. Religions and religious ethos are embedded in our personality and we live our lives with them. Abusing and attacking one’s religion is taken as abusing and attacking our lives. This, therefore, is but natural that the human being defends its religion with all its might. This weakness of ours is put to use against us and we are almost divided into various social sects and have become a toy in the hands of the people misusing us for their petty political benefits.

No religion is against any other religion and all the religions have the same essence of brotherhood and love among the people. As the saying goes, 'as we sow, as we reap', if we want others to respect our religions and our religious cultural ethic, we will have to first apply this to ourselves. Our respect for other religions will bring other's respect to our religion and it will ultimately diminish the social differences that will bring an end to 'us' and 'they'.

Abrahamic faiths are continuity to Islam. Followers of these faiths are the ‘people of the Book’. Consider the following Ayat from the Holy Quran that describes Jews and Christians who believe in God and the Last Day will be rewarded.

“Surely those who believe, and those who are Jews, and the Christians, and the Sabians — whoever believes in God and the Last Day and does good, they shall have their reward from their Lord. And there will be no fear for them, nor shall they grieve.” (The Holy Quran 2:62)

“Do not abuse those whom they worship besides Allah” (6:109)

“We believe in that which has been revealed to us and revealed to you; our God and your God is One, and to Him, we have submitted” (29:46)

“And had your Lord willed, those on earth would have believed, all of them together. So, will you (O Muhammad) then compel mankind, until they become believers.” (Yunus:99)

“O you who believe! Stand out firmly for Allah and be just witnesses and let not the enmity and hatred of others make you avoid justice. ... Al-Maidah:8)

"And [recall] when We took your covenant, [O Children of Israel, to abide by the Torah] and We raised over you the mount, [saying], "Take what We have given you with determination and remember what is in it that perhaps you may become righteous." -Quran, 2:63

.... and you will find the nearest of them in affection to the believers those who say, "We are Christians." That is because among them are priests and monks and because they are not arrogant." -Quran, 5:82

“…and nearest among them in love to the believers will you find those who say, ‘We are Christians,’ because amongst these are men devoted to learning and men who have renounced the world, and they are not arrogant” (The Holy Quran 5:82)

Prophet Muhammad Pbuh on various occasions has displayed his pluralistic norms and has asked people to respect and safeguard other religions and faith. Consider the following Hadees:

Consider the following letter by Prophet Muhammad (SAW) written to protect Christian Monks of St. Catherine's Monastery that is the oldest monastery in the world:

"This letter contains the oath given unto them [the monks of St. Catherine's Monastery], and he who disobeys that which is therein will be considered a disbeliever and a transgressor to that whereunto he is commanded. He will be regarded as one who has corrupted the oath of God, disbelieved His Testament, rejected His Authority, despised His Religion, and made himself deserving of His Curse, whether he is a Sultan or any other believer of Islam. Whenever Christian monks, devotees and pilgrims gather together, whether in a mountain or valley, or den, or frequented the place, or plain, or church, or in houses of worship, verily we are [at the] back of them and shall protect them, and their properties and their morals, by Myself, by My Friends and by My Assistants, for they are of My Subjects and under My Protection.

I shall exempt them from that which may disturb them; of the burdens which are paid by others as an oath of allegiance. They must not give anything of their income but that which pleases them—they must not be offended, or disturbed, or coerced or compelled. Their judges should not be changed or prevented from accomplishing their offices, nor the monks disturbed in exercising their religious order, or the people of seclusion be stopped from dwelling in their cells.

No one is allowed to plunder these Christians, or destroy or spoil any of their churches, or houses of worship, or take any of the things contained within these houses and bring it to the houses of Islam. And he who takes away anything therefrom will be one who has corrupted the oath of God, and, in truth, disobeyed His Messenger."

We find it difficult to define and redefine the philosophies of the human being who are one among us, how it is even though that we are capable of redefining our or theirs religions. To define something one has to understand the soul of the matter. If the soul of the religions is understood, the redefinition will not be needed. It will be good, therefore, for us to understand all the religions that we talk of redefining. Religious epics are the constitution of the religions concerned. And these religious constitutions are not man-made that can be thought of as redefining the meanings and their ethos. These constitutions are divinely written rules and regulations of living a dignified life that is full of the essence of all the positivities one can even think of for a life full of divine virtues.

We, therefore, need to redefine our thoughts and acts viz a viz our fellow beings and burn our evil thoughts of religious enmity. It is an enormous responsibility but worth taking into consideration as it has affected our generation and will affect more horrendously if not tackled at the earliest.

O mankind, indeed We have created you from male and female and made you peoples and tribes that you may know one another. Indeed, the most noble of you in the sight of Allah is the most righteous of you. Indeed, Allah is Knowing and Acquainted.  - Surah Al-Hujurat - 13

In Allah’s plan of work, ‘made you peoples and tribes that you may know one another is the most beautiful ethic of bringing different cultures together. We have used this for our evil designs that have brought humanity on the verge of ethical collapse. We realise it sooner the better.