Pluralistic Ideals of Halal and Haram, Permitted and Forbidden, from Islamic Perspective

2.    Every religion advocates divinity as a way of living.

3.    Haram is Haram Even If the Intention is Good

4.    Forbidden (Haram) Act Has no Individuality in It. 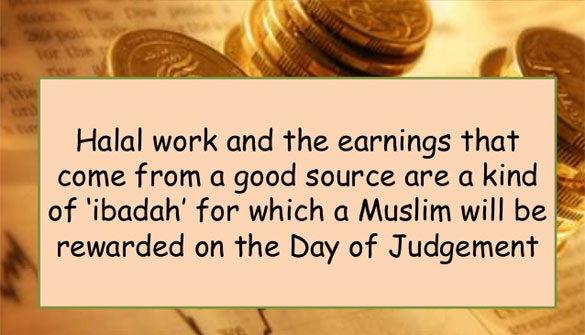 Islam is a way of life. Islam is a universal religion based on pluralistic ideas, humility, humbleness, kindness, brotherhood and everything that is logically and practically beneficial to human being and their surroundings. Therefore that what is not good for the betterment of the world is forbidden (Haram) and that what is beneficial for individuals and the society is permitted (Halal).

In almost all cases if ‘the medical composition’ of a particular medicine for a particular disease is found useful for the people of one country, it is useful for the whole world, with some exceptions, that also because of the different environment and food habits. Therefore all the rules and regulations formulated by Allah and His apostle, Prophet Muhammad (SAW) have the same meaning and same effect on the whole world.

Every Religion Advocates Divinity As A Way Of Living

If in Islam adultery, murder, theft etc. are forbidden (Haram حرام) these are forbidden in all other religions also. No religion encourages its followers to go for acts that are harmful and heinous. Every religion advocates divinity as a way of living. All that Islam announces to be harmful to its followers is harmful to the whole of the world. There cannot be a question of a particular religion advocating a better way of life for the human being and other religions deny it. Allah, the All-knower says in the Holy Quran:

O mankind, We have created you from a male and a female, and made you into races and tribes, so that you may identify one another. Surely the noblest of you, in Allah’s sight, is the one who is most pious of you. Surely Allah is All-Knowing, All-Aware. (Surah Al-Hujurat - 13) — Mufti Taqi Usmani

All human being are created from the same parents so all the rules and regulations of Haram and Halal for a decent life are the same for all of us. And as Allah, the Most Merciful says:

It has been indicated that ‘there is no force’ applied on anyone for anything. Those who take Haram actions and things as forbidden for the betterment of theirs and their society and those who care not for all these things will be judged on the Day of Judgement. 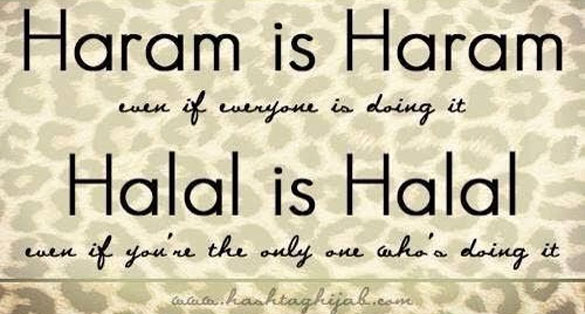 Forbidden (Haram) Act Has no Individuality in It

There are certain forbidden acts like drinking and gambling which are taken as an individual act not affecting other members of the society but it is wrong as every individual even in his individuality is connected to society in one way or the other. An individual is a part of society so every act of that individual causes ill effect for all related to him. That is the reason why every religion and every religious leader teaches the society as a whole the lessons of good deeds because he knows individuals together form a society.

Allah, the All-Knower respects the individuality of human being but has given each one of them a responsibility towards the society, means it has created a society where everyone has his individuality intact, is also bind to a society where all his good or bad deeds affect him and others in an equal manner. As the Holy Prophet Muhammad (SAW) says:

“Each of you is a keeper or a shepherd and will be questioned about the well-being of his fold” (Bukhari and Muslim).

As per the meaning of the above mentioned Hadees, if there is a perpetrator of any Haram act he is not the only one responsible for it rather all those who either knew about it or supported him in any way will be counted as a perpetrator of a forbidden act. In the words of Yusuf Al-Qardawi:

"An Islamic principle related to haram is that if something is prohibited or forbidden, then anything that leads to it is also considered a haram act. A similar principle is that the sin of haram is not limited to the person who engages in the prohibited activity, but the sin also extends to others who support the person in the activity, whether it be material or moral support." AL-Qardawi, Yusuf (1999). The Lawful and the Prohibited in Islam. American Trust Publications. p. 22.

Haram is Haram Even If the Intention is Good

Accumulation of wealth for the construction of a mosque, the establishment of a charitable trust, religious educational institutions or any other good work through illegal means, such as cheating, usury, gambling can not be taken as permissible (Halal) in Islamic jurisprudence. No matter how holy the intentions maybe but if the sources or resources are based on forbidden ways (Haram), it will be an act of sin in Islam. Allah, the All-knower is well aware of your good intentions but He has already commanded you in the Holy Quran, as:

"They ask you about wine and gambling. Say, “In both, there is a great sin and some benefits for people. And their sin is greater than their benefit.”… (Surah Al-Baqarah - 219) — Mufti Taqi Usmani

Other than the Holy Quran our Holy Prophet Muhammad (SAW) also says:

“Allah is good and does not accept anything but good, and Allah has commanded the Believers, as He commanded His messengers, saying, ‘O you messengers! Eat of whatever is good and work righteousness.’”

“O you who believe!”

“Eat of the good things which We provide for you.”

The Prophet then said,

“A man travels far, unkempt and dust-stained (for hajj, Umrah, or the like), raising his hands to the sky (and saying),

“If anyone amasses wealth through haram means and then gives charity from it, there is no regard for him and the burden of sin remains.”

Even if somebody, individually or a nation is accumulating medical apparatuses and medicines with a good intention of helping the needy, of a particular community or religion, nobody will appreciate it just as the Holy Quran and Ahadees mention. The hoarding of any such item that the whole world needs, is an inhuman activity, so the nations and the individuals capable of doing good deeds of helping the patients in need of medical attention, legally are appreciated. And will certainly be rewarded for performing their good deeds in a permissible way.

Let us all take to the straight path and not act in a forbidden manner even if it is with a good intention. And of course, forbidden deeds are ultimately harmful as these are harmful to society.