Father of Nation, Mohandas Karamchand Gandhi Was Embedded In the Universal Teachings of Peace, Love, Compassion and Inclusiveness All That Are the Traits of Islamic Ideology

1.    Tributes to Father of the Nation Mahatma Gandhi on his 152nd birth anniversary.

2.    Humankind has found peace and tranquillity in the verses of the Holy Quran and Prophetic traditions.

3.    Gandhi Ji’s ideology of peace and inclusiveness was in accordance with the Islamic ideology of a compassionate and merciful pluralistic society.

Ishwar Allah, they are Your names

Bestow wisdom on all, Lord!

The entire universe is Your child 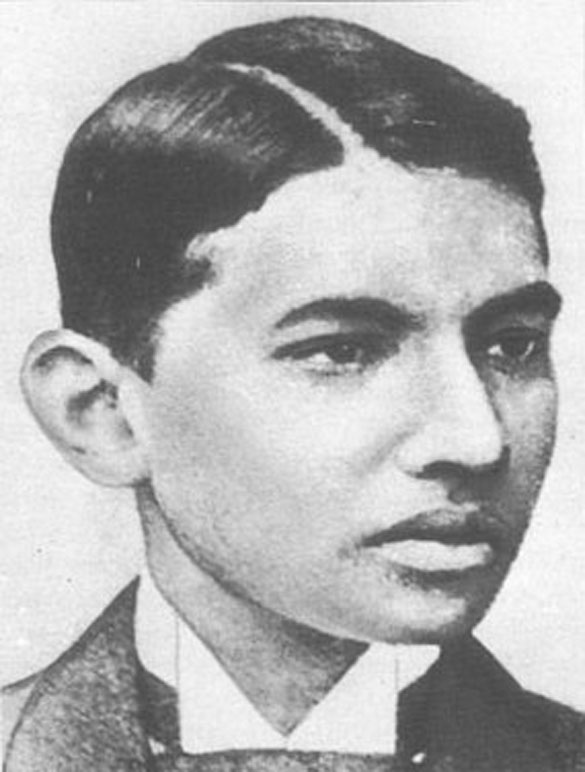 Gandhi in London as a law student

There are innumerable men of letters, religious and social scholars, scientists and philosophers that have on one time or the other been under the influence of Islamic traits of positivities and immortal knowledge of science and astronomy, environment and weather that runs the world. All have accepted the wisdom of Islam and preached it.

They have found peace and tranquillity in the verses of the Holy Quran and Prophetic traditions. Men of letter always had some positive and passionate statement to make about Islam. So did Bapu, the father of our nation, India.  Mahatma Gandhi found solace in the Islamic essence and ethics of Prophet Muhammad Pbuh. While speaking at a function organised by Anjuman-e-Fidaye Islam on June 23, 1934, he said:

“The Prophet was a Fakir. He renounced everything. He could have commanded wealth if he had so desired" (Source: The Times of India)

Mahatma Gandhi led many a struggle and protest the land of South Africa and India. He never left the philosophy of non-violence even during the time of atrocities he was sentenced to.

The Father of India, Mohandas Karamchand Gandhi was embedded in the universal teachings of peace, love, compassion and inclusiveness all that are the traits of Islamic ideology. He was impressed with the lifestyle of Prophet Muhammad Pbuh and perhaps because of this he too lived a very simple life. He could have afforded a luxurious life as others of his time did but he accorded himself a life of penury. It was his simplicity that he had no wealth of any kind in his house. Bapu was a symbol of compassion when he gave his only Chaadar to a woman who needed it. He saw a half-dressed woman on the bank of river Koelwar, in Arrah, Bihar and without uttering a word donated his Chaadar, his only dress, other than his Dhoti, loincloth. After this incident, he never wrapped his upper limb in any kind of piece of cloth. He remained a Dhoti draped warrior of peace, irrespective of shivering cold or simmering heat. Churchill called him, ' half-naked Fakir’ but had to bow in front of his ideology of non-violence. It was this half-naked Fakir that brought the most powerful nation of the world on its knees. Under the rule of the United Kingdom, the sun never set, it is said. 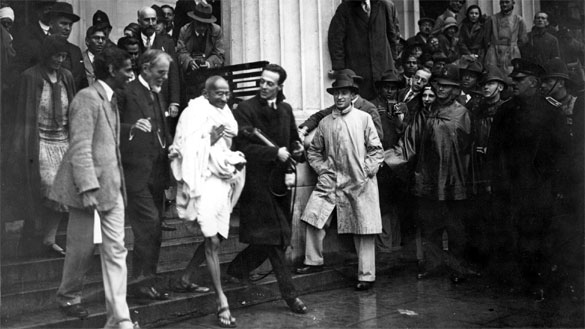 Gandhi leaves a meeting in London in 1931. (Douglas Miller / Getty)

Because Bapu was a true follower of love compassion and inclusiveness, he found the Islamic essence and divine attributes of Prophet Muhammad Pbuh to his liking. Mohandas Karamchand Gandhi said:

Those who do not wish to misunderstand things may read up the Koran, and they will find therein hundreds of passages acceptable to the Hindus, and the Bhagavad-Gita contains passages to which not a Mohammadan can take exception. (Hind Swaraj, 1938, p. 48)

Gandhi Ji’s ideology of peace and Inclusiveness was in accordance with the Islamic ideology of a compassionate and merciful pluralistic society.

Islamic virtues of peace and kindness are not specific for the believers of Allah and His apostles but the entire humankind.

Allah the Exalted says in the Holy Quran, ‘And we have not sent you (O Muhammad), except as a mercy the worlds. (Al-Ambiya: 107)'.  ‘The worlds' means the universe and everything that are there in it.  Mahatma Gandhi’s philosophy of Ahimsa and Satyagrah (non-violence and peaceful struggle) carries all the positivities of Abrahamic religions. Therefore, it can be said that Bapu was a man of peaceful stature and non-violent nature from the very beginning. Consider what Bapu said about Islam and its divine attributes:

Surely Islam has nothing to fear from criticism even if it is unreasonable. - Mahatma Gandhi

The Allah of Islam is the same as the God of Christians and the Ishwar of Hindus. - Mahatma Gandhi

If Hinduism teaches hatred of Islam or of non-Hindus, it is doomed to destruction. - Mahatma Gandhi

Islam stands for the unity and brotherhood of mankind, and not for disrupting the oneness of the human family. - Mahatma Gandhi

I do regard Islam to be a religion of peace in the same sense as Christianity, Buddhism and Hinduism are. - Mahatma Gandhi

“Yes I am, I am also a Muslim, a Christian, a Buddhist, and a Jew.” ― Mahatma Gandhi

If the enemy is inclined towards peace, make peace with them.  (Al-Anfal: 61)- — Dr Mustafa Khattab

...and do not let the hatred of a people prevent you from being just. Be just... (Al-Ma’idah: 8) - Saheeh International

By which Allah guides those who pursue His pleasure to the ways of peace (Al-Ma’idah: 16) - Sahih International

But God invites [everyone] to the Home of Peace, (Yunus -25) — Abdul Haleem

The good deed and the evil deed are not alike. Repel the evil deed with one which is better, then lo! he, between whom and thee there was enmity (will become) as though he was a bosom friend. (Al-Fussilat: 34) — Pickthall

"The protection granted by Muslims is one and must be respected by the humblest of them. And he who broke the covenant made by a Muslim, there is a curse of Allah, of His angels, and the whole people upon him, and neither an obligatory act nor a supererogatory act would be accepted from him as recompense on the Day of Resurrection." Sahih Muslim, Book 7, Hadith 3167

"Whoever killed a Mu'ahid (a person who is granted the pledge of protection by the Muslims) shall not smell the fragrance of Paradise though its fragrance can be smelt at a distance of forty years (of travelling).” Sahih Bukhari Vol. 9, Book 83, Hadith 49

Mahatma Gandhi had a thorough study of both the Holy Quran and the life history of Prophet Muhammad (SAW). Consider his thought on the Prophet of Islam given below:

From my reading, I received the impression that the Prophet Muhammad was a seeker of truth. He was God-fearing. In this I know I am not telling you anything new. I am only describing to you how I was impressed by his life. (At a function organised by Anjuman-e-Fidaye Islam on June 23, 1934) Source: Times of India.

These and not the sword carried everything before them and surmounted every obstacle. When I closed the second volume (of the Prophet’s biography), I was sorry there was not more for me to read of that great life. Young India, 1921

Being a follower of Bapu’s ideology of peace and tranquillity we, Indians owe it to us to develop a nation that is known as a nation of peace and compassion in the entire world. Human beings have always achieved the unachievable, therefore, setting this goal and achieving it will not be a herculean task for the citizens of a nation that boasts of Ram, Krishna, Sikh Gurus, Jain Tirthankars, Sufis Saints, Rishis and Munis. We, Indians are proud citizens of a country that accepted all the religions and faith that made it its abode. Transforming India into a nation of peace and non-violence will be a simple tribute to the ‘Father of the Nation' the great soul, Mohandas Karamchand Gandhi on his birth anniversary.

“I challenge anyone to understand Islam, its spirit, and not to love it. It is a beautiful religion of brotherhood and devotion.” ― Yann Martel, Life of Pi