Islam, Christianity, Hinduism, Judaism and All Other Faiths Believe in Oneness of God and Purity of Heart as the Essence of Religion

Christians, Muslims, Hindus, Sikhs and Followers of Almost All Other Faiths Agree On the Basic Idea of Religion and That Is That 'God Is Infinite

1.    Religions, both monotheistic and polytheistic have no grudges between them on the question of God being Almighty, All-Knowing, Compassionate and Forgiving.

2.    We the human being are divided into nations and races as it creates vibrancy in life.

3.    The differences created by us came to a pass and got a form of an unbridgeable gulf.

4.    Christmas and Lohri among other festivals have been an inseparable part of our social lives irrespective of our religious faith, in India.

5.    Bringing back religious togetherness in our society will not be difficult, we just need to take the first step toward inclusiveness of our world society. 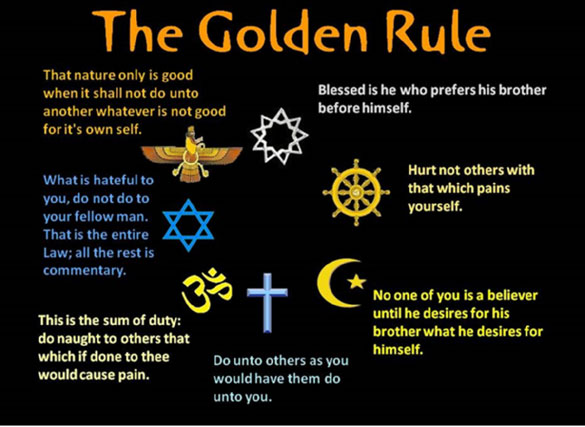 Christians, Muslims, Hindus, Sikhs and followers of almost all other faiths agree on the basic idea of religion and that is that 'God is infinite, with the essence of all affirmative values’. Religions, both monotheistic and polytheistic have no grudges between them on the question of God being Almighty, All-Knowing, Compassionate and Forgiving.  We the human being are divided into nations and communities, as the Holy Quran says, 'O mankind, We have created you from a male and a female, and made you into races and tribes, so that you may identify one another... (Al-Hujurat - 13)' so that we could identify each other and live with piety and brotherhood. The same Ayat further says, ‘Surely the noblest of you, in Allah’s sight, is the one who is most pious of you. Surely Allah is All-Knowing, All-Aware (Al-Hujurat - 13)'. Allah the All-Knower knows who among us is noble and pious. We have not been divided into nations and races for creating differences among us. We as different nations and races create vibrancy in life that is a beauty of society.

We misunderstood our differences and engaged in a race of supremacism regarding our nations, races and tribes. Resultantly the differences created by us came to a pass and got a form of an unbridgeable gulf. But it is not so. With the essence of belief in His Oneness and His guidance we, the human being can bridge any gap no matter how wide it may be. Allah, The Most Gracious says in the Holy Quran:

...Therefore, make peace between your brethren and observe your duty to Allah that haply ye may obtain mercy. (Al-Hujurat: 10)

All human beings are God’s creation, therefore, the Holy Quran’s revelations are for the whole of humanity. The verses of the Holy Quran are meant for all human beings. Above mentioned verse commands all to establish peace and harmony among the creations of Allah, the Creator.

Who will Bell the Cat

The question is who will take the initiative towards the togetherness of all the human beings, with all its religious and cultural traits that are the most beautiful treat for the righteously guided people. Holi, Eid, Christmas and Lohri among other festivals have been an inseparable part of our social lives irrespective of our religious faith, in India. Bringing back those golden old days of religious togetherness will not be difficult, we just need to take the first step to inclusiveness of our world society.

It is heartening to note that various religious and spiritual leaders and organisations are at work towards the inclusiveness of society. We the people of the world are guided by the politics of the day in almost every matter even our religious faith, hence our world political leaders will have to come forward and reverse the trend of religious egoism, religious jealousy and cultural disintegration.

Religions Advocate the Positivities of Life

No one religion does not address, truthfulness, kindness, compassion and inclusiveness among its followers. Every religion and faith talks of human beings being supreme creations of God. And it means God has blessed us all with the wisdom and intellect that we can achieve even the most difficult achievements. And bringing a sense of community inclusiveness and compassion among the followers of different religious beliefs and faiths is not an unachievable task. It is just that faithful among us who do not understand the basic traits and characteristics and essence of our religions will have to be taught the beauty of religious ethics. Most of the people among us follow our religions blindly on the guidelines of the half-baked religious leaders in mosques, madrasas, temples, shrines and religious educational institutions hence we also become people of half-knowledge that is dangerous for human societies. Many of us are unaware of the similarities in the religious incidents around our prophets and apostles.

For example, the incident of the Noah (Hazrat Nuh (AS)) and his ark, that is mentioned in all the Abrahamic religions and there is a similar story in Vedas (a collection of four books forming the earliest body of Hindu scripture. The Vedas story has a King who was warned by Lord Vishnu about the Flood.

The concept of sending Prophets in the Abrahamic religions to propagate the message of Allah finds similarity in the concept of Avatars (Ram and Krishna) coming in the form of a human being to spread the message of divinity. Consider following Quranic, Biblical verses and Shlokas and sayings of other religious leaders on the similarities of the religions and religious ethics.

Quranic Ayaat on the Concept of Religion

Say, "O People of the Scripture, come to a word that is equitable between us and you - that we will not worship except Allah and not associate anything with Him and not take one another as lords instead of Allah." But if they turn away, then say, "Bear witness that we are Muslims [submitting to Him]."  - (Al-Imran: 64)

He is Allah, the One and Only! Allah, the Eternal, Absolute; He begetteth not nor is He begotten. And there is none like unto Him. - (Al-Ikhlas: 112)

He has certainly succeeded who purifies himself - (Al-A'la - 14)

Biblical Verses on the Concept of Religion

“Blessed are the pure in heart, for they shall see God.” - Matthew 5:8

"Thou shalt have no other gods before me."

Concept of Religion in Hinduism

BG 4.38: In this world, there is nothing as purifying as divine knowledge. One who has attained purity of mind through prolonged practice of Yog, receives such knowledge within the heart, in due course of time.

"Of Him there are neither parents nor lord." - Svetasvatara Upanishad 6:9

Consider What Sikhism Says On the Concept of Religion

Only those beings are pure who meditate (and contemplate) on the Supreme Master.

The Guru-orientated devotees become pure by meditating on the Master.

With their devout aura and influence, their parents, family and friends, too, become pure and pious.

Pure, also, are those who recite, listen and enshrine Waheguru’s Name in their minds (consciousness).

Says Nanak, pure is the Guru-orientated persons who constantly contemplate the Lord.  - SGGS 919

O SON OF SPIRIT! My first counsel is this: Possess a pure, kindly and radiant heart, that thine may be a sovereignty ancient, imperishable and everlasting. - Bahá'u’lláh, The Hidden Words, Arabic no. 1

The Concept of Shintoism

He is One. He is without an origin or end. He has no father or mother, wife or son. He is without a body or form. Nothing resembles Him. Neither the eye can behold Him, nor can the power of thinking conceive Him. He is above all that you can imagine. He is nearer to you than yourself.

The religious concepts of religions of the world do not differentiate from each other. All the religions talk in the same vein as far as the betterment of human society and life after death is concerned. The goal of all religions is to purify the heart and the mind of the followers so that God manifests in the hearts of His believers. The act of purifying may differ in all the religions such as prayers through Zikr, Kirtan and meditations. The ways are different but the aim is to get the blessings of the Creator.

Consider the following saying by Anonymous, I read somewhere:

The basic question to be asked in today's world is, who are we to disintegrate society and break the social norms in the name of religion.