2.    Sri Bhagwat being the Chief of RSS as well as an intellectual himself is a widely heard and respected person.

3.    Mr Bhagwat’s call for a pluralist Indian society will certainly bear fruits and Assams will not be repeated.

4.    These trying times, for the whole humane society of the world, seem to be devoid of the positive essence of brotherhood and the message of divine inclusiveness. 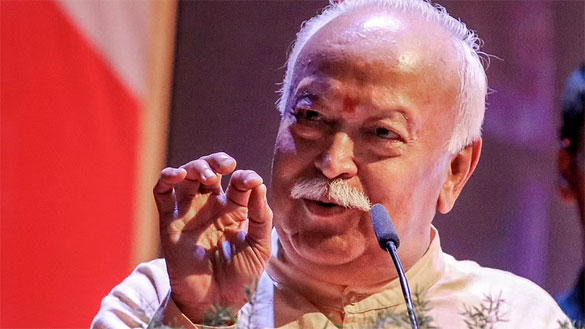 RSS' Chief echoes the basic call of all the Abrahamic religions and other faiths of plurality in the society. Shri Bhagwat understands all the Hindu religious epics and their values. He also seems to be following –

In the present prevailing Islamophobic environment in India, at least one plural voice from such a big organisation is welcome for the safety of Indian Muslims and Indians’ Idea of India essence. In his Surat speech, he said Hindutva has three essence – Darshanik, Laukik and Rashtriyata. All three meanings of Hindutva - Darshanik, Laukik and Rashtriyata described by Shri Mohan Bhagwat are found in the basics of all the Abrahamic religions and other religious faiths, as well. He further said, “Hindutva means those who walk unitedly with all people”. The Holy Quran says, ‘O humanity! Indeed, We created you from a male and a female and made you into peoples and tribes so that you may ˹get to˺ know one another. (Al-Hujurat: 13) - Dr Mustafa Khattab’. The Holy Quran says that all human beings are the same in their humane traits and that they are divided into nations and communities so that they could respect each other’s individuality and mingle with them in their cultural events.

Sri Bhagwat being the Chief of RSS as well as an intellectual himself is a widely heard and respected person. He has been advocating religious pluralism through his addresses at conferences and events. It is known to all that good things have little attraction for humankind in comparison to bad things, this is why, perhaps, people seem to be giving not much attention to his efforts on the pluralistic ethos of the country. But, better late than never, his call for a pluralist Indian society will certainly bear fruits and Assams will not be repeated.

These trying times, for the whole humane society of the world, seem to be devoid of the positive essence of brotherhood and the message of divine inclusiveness. Humankind’s empty stares at fellow beings present the horrific situation humanity is passing through. Everybody looks to have a positive passion for everyone but is unable to express his respect and trust towards other people. These people just need to be given words of faith in one another and the world will transform into a domain of peace and tranquillity and inclusiveness that is the only guarantee of prosperity and happiness.

Say whatever you wish to but you cannot even think of a prosperous society without inclusiveness being in its foundation. It is the absence of pluralistic ethos in the basics of the nations that have born the brunt of internal strife and resultantly horrific terrorism.

A pluralist society faces internal and external issues in front of the nation together without any discrimination of religion and culture. Many nations have been witness to their devastation and ruins because of their internal sectarian conflicts. United fight against the outside attack would have saved the nations that stand ruined today.

Different religions and cultures are like different colours of the rainbow of life on earth. Different people are like different flowers that make a beautiful garden on earth. The ethics of pluralism taught by all the religious dispensations needed to be brought into practice to stay away from social pain and sorrows. Everyone be it an individual or a nation if divided will fall, without distinction and united will stand.

Hindu scripture says, “Ekam Sat, Vipra Bahudha Vadanti”. It means — the truth is one but is interpreted differently by the learned.

Both the above-mentioned teaching from India’s two most revered religion asserts pluralistic ethos for a society.

Islam is a universal religion. Islam is a part of Abrahamic religions. Allah the Most Gracious revealed various Holy Books on His various prophets. All the available Holy Books and the sayings of the Prophets have the essence of pluralism and equality embedded in their ethos

For every [religious] community We have appointed rites which they perform. (Al-Hud: 67) -  Saheeh International

We make no distinction between any of them and to Him do we submit. (Ali 'Imran - 84)— Abul Ala Maududi

There shall be no compulsion in [acceptance of] the religion. .. (Al-Baqarah: 256) - Sahih International

And among His signs is the creation of the heavens and the earth and the difference of your tongues and colours. (Ar-Rum: 22) - Mufti Taqi Usmani

.... If Allah had willed, He would have made you one community, but His Will is to test you with what He has given ˹each of˺ you. So compete with one another in doing good. To Allah you will all return, then He will inform you ˹of the truth˺ regarding your differences. (Al-Maida: 48) — Dr Mustafa Khattab

Prophet Muhammad Pbuh’s life was an example of brotherhood between communities and equality for all human beings irrespective of their belief and customs. Consider the following tradition: