1.    When the surrounding is bathed in lights, one cannot but feel happy inside his self-being

2.    It is in nature that a person feels happiness inside his self when he sees people happy around him.

3.    It is by divine attributes of human life that Holi, Deepawali, Christmas and Eid ul Azha, Eid ul Fitr create an atmosphere of the divine light of happiness in the environment.

4.    Some of us are continuously being misguided from the righteous path of truth and love. 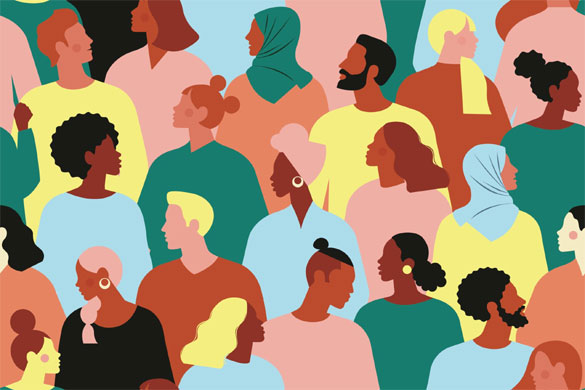 When the surrounding is bathed in lights, one cannot but feel happy inside his self-being. Festivals without spreading the message of love compassion and inclusiveness among all human beings cannot be festivals at all. It is in nature that a person feels happiness inside his self when he sees people happy around him.

One wishes or does not wish it is by divine attributes of human life that Holi, Deepawali, Christmas and Eid ul Azha, Eid ul Fitr create an atmosphere of the divine light of happiness in the environment. It is a divine plan of Allah, the Creator of the universe to make His creation understand the importance of inclusiveness. There have been Sufis, Rishis and Munis with the divine light of knowledge who understood Creator’s plan and taught their disciples to be united, as united we stand and divided we fall.

It is not that today’s corrupted society does not understand the value of divine attributes of brotherhood and does not celebrate it but, yes, some of us are continuously being misguided from the righteous path of truth and love.

A country like India that has a different regional linguistic dialect after every few miles and where people celebrate every festival as an Indian festival, be it of any religion or region can never be divided into religious orders. There is no country in the world with so many diverse cultures and traditions being celebrated inclusively. We, the people of India, do not celebrate our festivals without the company of our neighbours. There is no concept of ‘others’ when it comes to festivities of festivals or other social celebrations like weddings.

We the people of the world are born to one parent and then divided into nations so that we understand each other and live like a family of Allah the Exalted. Consider the verse from the Holy Quran:

“O mankind, indeed We have created you from male and female and made you peoples and tribes so that you may know one another” Quran 49:13)

Allah the Most Compassionate revealed the Holy Quran on Prophet Muhammad Pbuh and described him as, “We have not sent you, [O Muhammad], except as a mercy to the worlds." (Quran: 21-107), meaning thereby that the Holy Apostle was sent on the earth as a guide to all the human beings wherever and whoever they are. Quran does not talk of Muslims only, it always addresses ‘the humanity’ for inclusiveness is the nature of Islam.

Allah the Almighty does not discriminate against his creations. He, the Most Compassionate does not force religion on his servants. Allah the Exalted says, ‘"To you be your religion, and to me my religion (Al-Kaferoon: 6)’ For Him all are equals. Equality is the hallmark of Islam. There is no discrimination between a man and a woman, an Arab and a non-Arab. Every human being is bestowed with the positive essence of brotherhood and inclusivity embedded in his soul. All human beings are blessed with intellect and wisdom on equal footing. Consider the following from the Last Sermon of Prophet Muhammad Pbuh):

The Lesson of Inclusiveness From The Prophetic Traditions

Humankind is advised to take the righteous path by adhering to the Sirat-un-Nabi (Life of the Prophet) and Sunnah, the traditions and practices of Prophet Muhammad Pbuh and to consult the Holy Quran to understand the importance of living in the here and hereafter.

Allah the Most Compassionate and Merciful has commanded humanity to respect all religions and faith by living in harmony with all. True Islamic essence lies in the inclusivity of the society. Consider the traditions and the sayings of Prophet Muhammad (SAW):

Narrated by Anas, the Holy Prophet Muhammad (Pbuh) said: “All creatures are [like] a family of God: and He loves most those who are kindest to His family.” (Mishkat al-Masabih, 3:1392; Bukhari)

“There are rewards,” said the Prophet, “for (our behaviour to) all living beings.” (Bukhari, Muslim)

People are equal like the teeth of a comb. (Prophet Muhammad Pbuh)

Family of the God

Prophet Muhammad says All creatures are [members of] the family of God’ (Mishkat al-Masabih, 3:1392; quoted from Bukhari) and this family today, divided into innumerable religions, faiths and sects, is fighting each other for its religious supremacy and materialistic authority. The veil of illiteracy has defaced the essence of humanity, love and peace. The present world is nothing but a battlefield. May the spiritual lessons of our past and present religious guides and teachings of our Sufis and Rishis supersede the darkness of illiteracy, jealousy and hatred and the light of Deepawali illuminate our lives once again.

“Come sit with me! Let us drink the holy wine of happiness.”

Still, this whole world is but a house, no more. Whether we go from this room to that room or from this corner to that corner, are we still not in the same house? (1)

May the auspicious Deepawali illuminate every corner of our country, especially and the world in general, with the essence of brotherhood and peace.