Kindness, Sympathy And Compassion Are Embedded In The Soul Of Every Religion And Faith

1.    Kindness, sympathy and compassion are the souls of the preambles of all the organisations of the world working for the crying humankind.

2.    Innumerable NGOs and government bodies of the world are engaged 24x7 in casting the miseries of the poor and the destitute off.

3.    The world knows compassion and kindness are the only way that can bring peace and harmony to the lives of humankind.

4.    The people in need do not need only our material support but our compassion and kindness.

5.    The world has been divided into developed, developing and underdeveloped to make sure the distinction between the people of God remains as loud and clear as possible.

Kindness, sympathy and compassion are the souls of the preambles of all the organisations of the world working for the crying humankind as these are embedded in the soul of every religion and faith. The innumerable NGOs and government bodies of the world are engaged 24x7 in casting the miseries of the poor and the destitute off but it seems to be of no avail. The world has been knowingly divided into developed, developing and underdeveloped to make sure the distinction between the people of God remains as loud and clear as possible. No one of those who are in power and in whose hands is the future of the dying populace of the world can say that they do not know Allah, the All-Knower has created human being like brothers and sisters from one parentage, as the Holy Quran mentions: O mankind, We have created you from a male and a female, and made you into races and tribes,... (Surah Al-Hujurat - 13) — Mufti Taqi Usmani. The human being is divided into races and tribes so that, as the Holy Quran says in the same verse, ‘Surely the noblest of you, in Allah’s sight, is the one who is most pious of you, to identify the noble among us and to reward for our good deeds.

Knowing that the noblest among the human being is the one who cares for the poor, destitute, orphan and sick among others, the people that matter is busy fighting and violating the basic rights of the people.

The whole world knows compassion and kindness are the only way that can bring peace and harmony needed to fight the obsession of ‘owning the world’ by hook or by crook. I say the whole world knows because every religion or religious faith or the spiritual teachers and even an honest mind understands the Holy Scriptures of the religion they follow. All the men who matter understand the following verses and sayings of the religious leaders and the Holy Scriptures and many of us do also act like acting according to them. Consider the following:

And Indeed, Allah is with those who are of service to others. (Al Quran 29:70)

"You shall love your neighbour as yourself" (Leviticus 19:18)

‘He who tends to the sick tends to me’ – The Buddha

The world knows what the world religions preach and what are its duties even then it does not go with the teachings of the religion he pretends to follow. It is not to say that the human being does not practice charity for the sake of a divine life hereafter but it is for sure that it lacks compassion and love in whatever he does. World people have to create compassion and kindness for society to make the world compassionate and kind.

The duty of the learned among us is not to let people fight a war or supremacism but to lead them to help them change the way they see others. Universal good lies in a philosophical change of mind towards compassion. It does not require a materialist approach to bring happiness and serenity to the faces of poverty-ridden citizens of poor and war-torn nations.

The religious approach to bring peace and prosperity among the people, nations, civilisations and tribes should be followed and acted upon. Let us see what the world religions say, in the following:

What Christianity Teaches To Its Followers About Their Duty towards Humankind 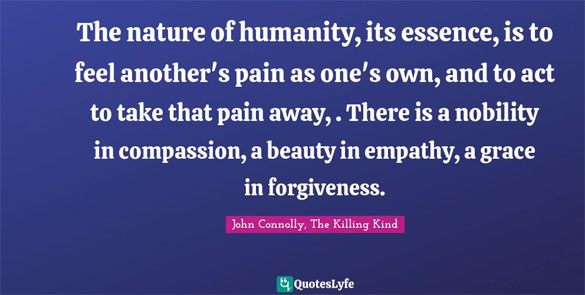 The significant verses from the Christian epics commanding mankind regarding their behaviour towards the needy are as follows:

“For I was hungry and you gave me something to eat, I was thirsty and you gave me something to drink, I was a stranger and you invited me in, I needed clothes and you clothed me, I was sick and you looked after me, I was in prison and you came to visit me … Truly I tell you, whatever you did for one of the least of these brothers and sisters of mine, you did for me” (Matthew 25:35-36, 40).

Pure and undefiled religion in the sight of our God and Father is this: to visit orphans and widows in their distress and to keep oneself unstained by the world. (James 1:27)

So King Joram returned to be healed in Jezreel of the wounds which the Arameans had inflicted on him at Ramah when he fought against Hazael king of Aram. Then Ahaziah the son of Jehoram king of Judah went down to see Joram the son of Ahab in Jezreel because he was sick. (2 Kings 8:29)

When Elisha became sick with the illness of which he was to die, Joash the king of Israel came down to him and wept over him and said, “My father, my father, the chariots of Israel and its horsemen!” (2 Kings 13:14)

Now when Job’s three friends heard of all this adversity that had come upon him, they came each one from his place, Eliphaz the Temanite, Bildad the Shuhite and Zophar the Naamathite; and they made an appointment together to come to sympathize with him and comfort him. (Job 2:1)

Is anyone among you sick? Then he must call for the elders of the church and they are to pray over him, anointing him with oil in the name of the Lord; (James 5:14) 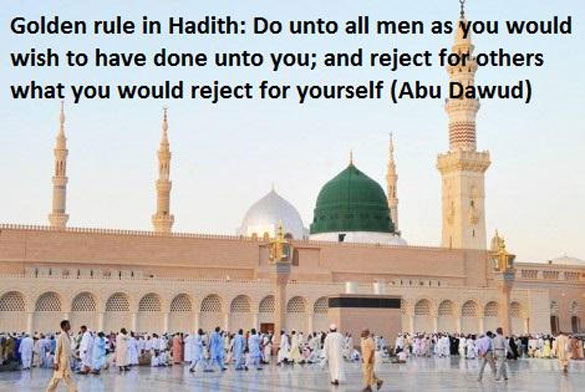 Essence of Islam, compassion and empathy, in one short Hadith

Indeed, Allah enjoins justice, and the doing of good to others; and giving like kindred; (Al Quran 16:91)

..Goodness does not consist in turning your face towards East or West. The truly good are those who believe in God and the Last Day, in the angels, the Scripture, and the prophets; who give away some of their wealth, however much they cherish it, to their relatives, to orphans, the needy, travellers and beggars and to liberate those in debt and bondage... (Al Quran 2:178)

The reward of goodness is nothing but goodness. (Al Quran 55:61)

“And We have sent you O Muhammad (SAW) not, but as a mercy for all of humankind, jinn and all that exists.” and they give food, out of their love for Him (Allah), to the needy, and the orphan, and the captive, (Surah Al-Insan - 8) — Mufti Taqi Usmani

The Ahadees mentioned in the following lines are a true reflection of the life of Prophet Muhammad Pbuh. These are a living testimony of the practicality of all that is said regarding the kind and compassionate approach towards the human being and their rewards hereafter.

“…Did you not know My servant was sick, and you did not visit him and had you visited him you would have found Me with him?”

“…Did you not know My servant asked you for food, but you did not feed him and had you fed him you would have found that (reward) with Me.”

“…My servant asked you for a drink, but you did not provide him drink, and had you given it to him you would have found that (reward) with Me.”

Prophet Muhammad said, “Kindness is a mark of faith, and whoever is not kind has no faith.” (Narrated by Muslim)

“A prostitute had once been forgiven. She passed by a dog panting near a well. Thirst had nearly killed him, so she took off her sock, tied it to her veil, and drew up some water. Allah forgave her for that.” (Narrated by Abu Huraira)

Teachings of Judaism Regarding Being Kind to Human Being

When one who is a contemporary of an ill person visits him, he takes one-sixtieth of his illness… (Bava Metzia 30b:12)

“Rejoice not when your enemy falls, and let not your heart be glad when he stumbles…  (Nedarim 40a:3-6)

"You shall love your neighbour as yourself" (Leviticus 19:18)

Hinduism and Lessons on Kindness

We keep aloof from the outside world when we are ritually impure. We must regard any day on which we fail to do any service to others as a day of impurity. Paramesvara is the father of all creatures. By serving our fellow men we serve the Lord. (Tirumular in Tirumantiram

Feed milk to your neighbour's child, your child will be nourished." (A Saying in Hindu Dharma)

One may amass wealth with hundreds of hands but one should also distribute it with thousands of hands. If someone keeps all that he accumulates for himself and does not give it to others, the hoarded wealth will eventually prove to be the cause of ruin. - Rig Veda (10-177-6)

If there is but one tree of flowers and fruit within a village, that place is worthy of your respect. (Mahabharata, Adiparra, 138:25)

Charity given out of duty, without expectation of return, at the proper time and place, and to a worthy person is considered to be in the quality of goodness. - Bhagavad Gita (17.20)

Lessons on Kindness from Buddhism

‘He who tends to the sick tends to me’ – The Buddha

“Just as the soft rains fill the streams,

Pour into the rivers, and join together in the oceans,

So may the power of every moment of your goodness

Flow forth to awaken and heal all beings–

Those here now, those gone before, those yet to come.” ----Lord Buddha

Let Us Be Compassionate For The Grieving Humankind

We, human being have ingrained compassion, kindness, love and brotherhood in our personality traits, this, therefore, will not be difficult at all to bring it to the fore and work for the bereaved fellow humankind. All the religions have created universal characters as followers of all the religions are citizens of all the nations in the world hence let the world be compassionate, sooner than later.

The world population is in the midst of one of the worst calamities ever happened - the Covid-19 Pandemic. Other than this Floods In Indonesia, India, Japan and China, Hurricane In United States, Volcano Eruption In The Philippines and the Earthquakes In Turkey, The Caribbean, China, Iran, Russia, Philippines and India and Cyclone in India and Bangladesh are some of the most recent calamities that the world has faced. The havoc and devastation brought by these have left innumerable people at the mercy of their fellow human being. Many among us are working for the elimination of poverty but that is not enough, we all will have to share the responsibility and come forward to bring smiles that have lost somewhere.

The people in need do not need only our material support but our compassion and kindness to assure them of their being a member of the large world family. These brothers and sisters should be assisted with all that they need, keeping the following Hadees in mind:

“Be kind, for whenever kindness becomes a part of something, it beautifies it. Whenever it is taken from something, it leaves it tarnished.” (Sahih Muslim)