Endgame in Asansol, the 'City of Brotherhood:' when the heart-wrenching outcries of people were piercing the sky, the dark forces were talking of “appeasement’ and electoral gains 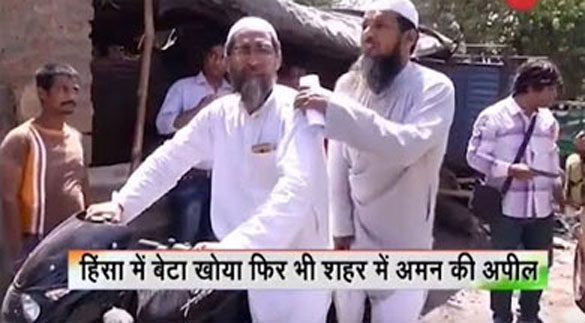 Imam Imdadullah Rashidi (right) has executed in perfection the spirit of the city despite facing the immense loss of his 16-year-old son who was killed in the communal violence. Credit: YouTube Screengrab

The first thing that struck my eyes when I arrived in Asansol for the first time to join my present job three and a half years ago was the large towering gate at the entrance of the city, on top of the gate was (and still is) written in bold engravings – “City of Brotherhood”. Anyone visiting the city (it is the second largest city in West Bengal after Kolkata) and quite a large number of people including journalists, political leaders, Union ministers, fact-finding teams have of late flocked to the city through that gate.  Asansol was in the national headlines recently for all the wrong reasons but I hardly saw anyone drawing our attention, while reporting on communal discord in Asansol on national television to the reigning leitmotif on the entrance of the city – amity or brotherhood. But why this proud flaunting of such a singular feature of the city through specially engraved words at the entry gate?

Even a cursory look at Asansol`s surroundings would tell you why. It is part of Bengal’s industrial hub with coal and steel being the prime industrial products which are produced and get supplied to different parts of India and even abroad. The promise of industry lured many Indians from across the country to come to this city in search of livelihood and because of this, apart from Kolkata, Asansol, unlike other towns and cities in Bengal, has a unique cosmopolitan demographic profile as it enfolded the Sikhs, South Indians, people from Bihar, Uttar Pradesh and the hills, who are all working in the factories in and around the city. The thematic of brotherhood stems from this varied tapestry of human population who has been living here together in peace for so long.

The city is populated with many mosques, mandirs, churches and gurdwaras and the public space here enjoys a vibrant multi-lingual mode of communication. You get India in the micro-form in Asansol and for the last three years. I personally saw how every community would get along with each other perfectly well. However since March 26, 2018, the day of the Ram Navami procession, that much celebrated mutual camaraderie suddenly got lost. That apparently embedded bedrock of co-existence was thrown asunder and by now the city has got its name firmly etched in India`s map of communal riots and subsequent forms of politicisation and media coverage. That amative togetherness, constructed through years of co-living, co-sharing, suddenly looks finished, shattered, snatched away. Trust has disappeared and different localities wear a grim look of suspicion and suppressed apprehension about the next round of trouble.

I recall in this context the refrain in Samuel Beckett’s well known absurdist play, Endgame – “It Looks Finished”. For me, Asansol in the last couple of days witnessed the worst form of necro-political endgame where communal lines were sharpened for political motives. The outcome? Death, destruction and innumerable agonies for the commoners. Lord Rama must have been pained the most watching the poor sufferers and Bengal never saw such weaponised and hostile celebration of Ram Navami in its history. Was there a calculated design behind this hysteria whipped up in the name of Rama? Newspaper reports say there were strangers/outsiders in the Ram Navami processions in Asansol on that day who fomented trouble by instigating posturing and slogans. Were they asked to do that deliberately knowing fully well what might be the outcome? Is this the real face of the so-called cultural nationalism?

On March 27, I was returning from my home town to Asansol and just on the previous day the first incident of inter-community skirmishes took place in Raniganj, which is also known for its coal mines and is very close to Asansol. I was deeply disturbed (and I am sure many others too had the same feeling) when I saw the raw and explicit front page photograph in Bengali newspapers of an injured police officer whose hand was severely hit by a bomb allegedly hurled by miscreants during the Raniganj communal clashes. Editorial discretion should have thought twice before using such sensitive images, as later I heard many in Asansol saying that that image was also being used to rouse polarising sentiments. My immediate and spontaneous first reaction while reading the news about communal tension in Raniganj was, if it is Raniganj today, it might be Asansol tomorrow, as Asansol is very close to Raniganj and as now a days the northern parts of India are always under the grip of manufactured communal tensions, my apprehensions crowded my mind with unknown foreboding and I discovered that many of my colleagues shared the same fear. We, however, hoped against hope as that is how our routinised existential blues in India are encountered by common citizens.

One of my academic friends who does a lot of ethnographic field surveys once told me that to get the real buzz of the city always talk to taxi drivers. Armed with that ethnographic wisdom, I chatted with my man on the steering on my way from Asansol railway station to my university and the middle-aged driver, grim but composed; repeatedly assured me that what happened yesterday in Raniganj can never get replicated in Asansol as this city is different. His assured faith in the city’s cultural (should I use the much maligned word ‘secular’ here?) ethos really had a ring of unquestioning confidence. I could smell his affinity with the engravings on the gate – “city of brotherhood”. I was relaxed and having reached the campus focused on Henry David Thoreau`s serendipity in Walden with my post-graduate students.

My serenity was, however, short-lived as I was alerted by one of my colleagues that all of us need to pack up and leave the university early on that day as there is supposed to be a Ram Navami rally to be organised at 3.30 in the afternoon and as people are expecting trouble during that procession today, we better not take any chances and leave for home early. Even then the assuring words of the taxi driver were still ringing in my ears and I tried to downplay the fears in my students and colleagues. By evening, however, the worst started to happen and concocted rumour mill machineries were fully active across the city. I myself saw how fake videos were circulating in our much-acclaimed digitised public sphere, where Netizens failed to apply their wisdom and contributed further in the proliferation of the rumour mill.

The streets became ghostly; people whom you know stared at you with suspicion and fear. Every half hour I could see how rumours were gaining grounds and how the people of the city of brotherhood started to speak in polarising terms. I could see the genealogy of a communal riot unfolding before me. The dark cannibalising forces were on the march. I summoned up courage and kept thinking of the taxi driver’s composed words. We all grew up reading about Gandhi’s fasts in communally hit areas during Partition and we all know how his self-inflicted sufferings on himself used to work for peace and calm and how he tried his best to pacify the agitated masses.

Today, when the Mahatma has been dismembered into his specs and outlines for governmental campaigns, one Imam Imdadullah Rashidi in Asansol and one Yashpal Saxena  in Delhi emerge as paragons of sanity and peace. By now the whole of India knows through internet about them, but what the net surfing average Indian does not realise is that when politicians come and visit a communally tense zone to gain political capital out of it, and when the forces of death silently compose the blueprint of engineered communal animosity, a commoner dies, India dies and the farce of routinised democratic endgame continues.

If fraternity is the soul of the demos, then that was slaughtered last week in the ‘city of brotherhood’. Who did it? Which particular section of our society? Well, one part of our soul killed the other, each of us was diminished and when the heart-wrenching outcries of people were piercing the sky, the dark forces were talking of “appeasement’ and electoral gains. Today, I saw the entry gate of Asansol again, the engravings are still there, bright, emblazoned in full glory – nobody talked of that though except Imam Rashidi, who executed it in perfection and in spite of his irreparable loss, secured the spirit of the city (democracy) – co-living.