Goddess Kottari Devi Is Bibi Nani for Muslims In Balochistan - Edited Excerpts From Shakti: 51 Sacred Peethas Of The Goddess

Lyari Tehsil is the remote hilly area of Pakistan’s Baluchistan province, about 250 km northwest of Karachi, 19 km inland from the Arabian Sea, and 130 km west of the mouth of the Indus. It is within the narrow gorges of Lyari’s rocky terrain that the ancient temple dedicated to Kottari Devi, the Hinglaj Mata temple, is located.

Before the independence of India, the Partition struggle and the subsequent formation of Pakistan in the year 1947, the region which constitutes modern-day Pakistan had a large Hindu and Sikh population inhabiting it. After Partition, this number fell to about 3 million because of the migration of nearly 6 million Hindus and Sikhs to the newly formed India. Of these, nearly 2.3 million were Hindus, largely concentrated in the district of Tharparkar (Thar) within Sindh province.

It is these people who form the largest contingent of pilgrims visiting Kottari Devi annually. While Kottari Devi is worshipped by all from different classes, communities and walks of life, many of the visiting pilgrims to this temple are bonded labourers and farm workers. The attire of these people living in the rural settlements of Pakistan, in what is a treacherous and punishing mountainous desert landscape, is strikingly colourful and bright. The women are dressed in their finest heavily embroidered clothes with bangles stacked on their arms as they come to pay their respects to Kottari Devi. For the Thari children, many of whom are employed as bonded labour from a young age, this is a once-in-a-year fun expedition and a time to see the world beyond what they know. 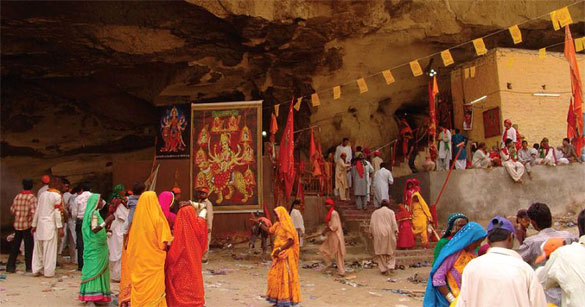 A Goddess For All Faiths

The pilgrim’s journey to Hinglaj Mata temple serves as a purpose of bringing people from all walks of life together; it is a meeting point for doing community work in the name of the Goddess. The opening up of a large-scale community kitchen for the purpose of Seva or the practice of selfless service, brings together pilgrims. Each year, hundreds of volunteers come together for this devotional purpose. In the kitchens, vast quantities of food such wheat rotis, rice dishes, sattvic vegetables and lentil soups are cooked for thousands of pilgrims each day.

Historically, few could make the gruelling journey across the Makran desert to Hinglaj, where part of Devi Sati’s head is believed to have fallen. When they finally arrive at the destination, it is as though they have arrived within an oasis of faith, a sanctuary and a place of rest from the troubles of the world.

Uniquely enough, Kottari Devi at the Hinglaj temple belongs not only to the Hindus and Sikhs of the region, but is equally popular among the local Muslims living in the area, who both revere and protect Hinglaj Mata. The locals know her as Bibi Nani (maternal grandmother), and the temple is considered as the Nani temple. Bibi Nani may very well be the Goddess Nana, who appeared on Kushan coins and was widely worshipped across both West and Central Asia. The local Muslims, in fact, join in on the pilgrimage and call it the ‘Nani ki Haj’.

The Legends Of The Hinglaj Mata Temple

There are many legends and stories that surround the Hinglaj Mata temple. One among them explains how the place received its name. The story talks about two princes, Hingol and Sundar, who were from the Tatar Mongol clan, living sometime in the Treta Yuga. They spent their days tormenting people due to their thirst for strife. To free the people from the tyrants, Lord Ganesha, the Devi’s younger son, killed Sundar, whose death drove Hingol mad with a thirst for vengeance. The terror among the people grew even greater and in their desperation they appealed to the Devi, the Great Goddess and Divine Mother, to put an end to their suffering.

The Devi, unable to see her devotees in pain, descended on to the battlefield. After warring with Hingol, she lured and trapped him in a cave, where she brought an end to his unrelenting ego and his life. In his last moments, with the clarity of one whose ego has been completely destroyed, Prince Hingol prayed to the Devi, requesting her to name the cave – the place which was bound to become a sanctified place of her worship – after him, so that he may always be associated with her. Since then the cave where the idol of Kottari Devi is worshipped is called Hinglaj Devi temple.

Another legend of the Hinglaj temple testifies to its ancient roots in the Dwapara Yuga. It is said that when Parashuram was on his killing spree, bringing an end to all kshatriyas who were maddened and corrupted by power, Ratnasena, the king of Sindh, arrived at the ashram of Rishi Dadhichi with his children, seeking shelter. Mistakenly, Ratnasena, in this time of exile, stepped outside the premises of the ashram and was instantly killed; his sons though remained safe within the boundaries.

On entering Rishi Dadhichi’s ashram in search of King Ratnasena’s sons, Parashuram[N1]  found that there were only Brahmins in the Asharam; the Kshatriya sons were given protection in the guise of Brahmins by Hinglaj Mata and from then on, were known as Brahmakshatriyas or warrior-priests. One of the sons of Ratnasena, Jayasena, returned to Sindh eventually to rule the kingdom, armed with a protective Hinglaj Mata mantra given to him by Rishi Dadhichi.

Inside the sanctum of the Hinglaj cave, the Devi’s idol is not one that is man-made, rather it is a small shapeless stone worshipped as Kottari Devi. The stone is smeared with sindoor or vermilion. Pilgrims who come to worship come bearing traditional red banners of the Devi, wearing the distinctive red and gold scarves covering their heads. With the newly built Makran Coastal highway, what was once a long and treacherous journey was made a mere four-hour drive from Karachi. Every year 25,000 to 30,000 pilgrims come to the temple to pay their respects, some come in private cars and buses, a few on two-wheelers and cycles, and the most austere of devotees make the journey on foot, all to be graced by the deity, the Divine Mother, who is known to end the ego and bless those who come to her with enlightenment.

Shakti: 51 Sacred Peethas of the Goddess