Salam and Salutation to Pope Francis

The iconic spiritual leaders of our time took decades of struggle and growth before they were formed into the universally recognized symbols that we know and love. Mahatma Gandhi, Mother Teresa, the Rev. Martin Luther King, Jr., and Nelson Mandela are universally recognised examples. Pope Francis is an exception. 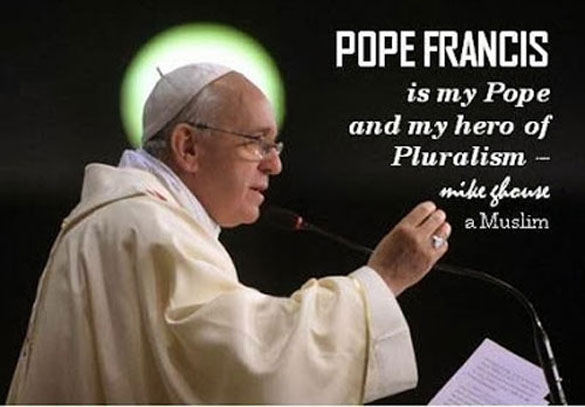 He comes to us, as it were, fully formed. In terms of his tenure as Pope he is in his infancy and yet Francis seems to have hit his stride.

To understand the Pope’s approach, method and message, take a look at his visit to the island of Lampedusa. The small island in the Mediterranean has become a battleground of the larger ideas that are in conflict in Europe. It has been visited by rightwing leaders who denounce immigrants in crudely racist and xenophobic terms. The pope’s visit therefore became symbolic of a counter-balancing approach, one that was more welcoming, all-embracing, caring and compassionate.

The pope spoke of the “immigrants dying at sea, in boats which were vehicles of hope and became vehicles of death.” He shared his distress at the “tragedy” which has become like “a painful thorn in my heart.” He felt “shame” at the plight of those who were suffering and the indifference of the world. “The Church” he assured the immigrants, ”is at your side as you seek a more dignified life for yourselves and your families.”

The pope used the plight of the mainly African immigrants to raise larger issues that afflict all humanity in the age of globalization. He condemned what he called “the globalization of indifference.” He berated “the culture of comfort, which makes us think only of ourselves, makes us live in soap bubbles which, however lovely, are insubstantial; they offer a fleeting and empty illusion which results in indifference to others.”

The pope’s enormous influence seemed to have touched a nerve in Italian society. After a recent disaster at sea there were candle-lit vigils, flowers and mourning for those lost at sea. This was a tribute to the generosity of spirit for which Italians are famous, especially considering the challenges they face with unemployment, the economic crisis and the genuine problems of immigration.

But Pope Francis was not taking a path outside his faith tradition. On the contrary he was reverting to its foundational principles. He is inspired by two figures above all – Jesus and Saint Francis; indeed taking the name of the latter after being elected pope. He has learned from them that Christianity in its essence means compassion, humility and caring for others – especially the vulnerable in society. Immediately upon being elected pope he had expressed this philosophy by reaching out to ordinary people, living simply and rejecting the pomp and extravagance of the papal court. His washing of the feet of those in prison, including Muslims, was the ultimate act of humility. It was directly inspired by Jesus and Saint Francis, the very essence of their message.

The pope also embarked, again almost immediately, on reaching out to the Muslim world. Relations between Muslims and Christians had not really recovered since the time when his predecessor Pope Benedict XV1 gave a lecture in September 2006 in which he quoted a passage that described Islam as “evil and inhuman.” Even at the time the present pope, then Archbishop in Buenos Aires, registered his disagreement stating, “Pope Benedict’s statement[s] don’t reflect my opinions.”

From his first foreign policy address in March 2013, Pope Francis made improving Muslim-Catholic relations one of his top priorities.

Before an audience of ambassadors from 180 countries, he explained how he wanted to work for peace and bridge-building between peoples. Muslims and Catholics, he claimed, needed to intensify their dialogue. Positive shockwaves were sent into Muslim-Catholic circles, and Muslim scholars and religious institutions around the world welcomed Pope Francis’s election.

In September 2013, Pope Francis sent a powerful message to Ahmed al-Tayyeb, the top imam of the University of Al-Azhar, the leading Islamic university of the Muslim world founded a thousand years ago. His message expressed “esteem and respect for Islam and Muslims” and hoped that his effort could improve “understanding among Christians and Muslims in the world, to build peace and justice.”

Pope Francis sent another message to Muslims on Eid al-Fitr, the holiday that ends Ramadan, in which he called for “mutual respect through education.” In his personal note Pope Francis asked Muslims and Catholics “to respect the religion of the other, its teachings, its symbols, its values.” Moreover, he explained his reasons for choosing Francis as his own name.“Francis” is “a very famous saint who loved God and every human being deeply, to the point of being called ‘universal brother.’ He loved, helped and served the needy, the sick and the poor; he also cared greatly for creation.”

By reminding us of Saint Francis, the pope was pointing to a significant moment in the shared history of Christians and Muslims. Saint Francis of Assisi in the 13th century left the camp of the Christian Crusaders besieging Damietta, the walled Egyptian city, to seek out Malik al-Kamil, the Sultan of Egypt, then the most powerful ruler in the entire region. He did not seek confrontation, and instead encouraged his followers to “not engage in arguments or disputes, but to be subject to (serve) every human creature for God’s sake.”

The meeting between Catholic priest and Muslim Sultan is one of those remarkable encounters in history which has reverberations over time. It is not fully clear as to what Saint Francis was doing in the holy land. There are accounts that claim he had set out to convert the Muslim leader to Christianity. Whatever the intentions of Saint Francis, the meeting changed him. The Sultan was hospitable to his guest, allowing him to remain in his court for several days and saw that he was escorted back safely by his armed guard to the Christian army. Saint Francis saw a ruler already patronizing serious Muslim-Christian dialogue and he saw large Christian communities living amidst Muslims. Saint Francis returned to Italy fully committed to promoting better relations and dialogue with Muslims.

Saint Francis must have heard of the reverence for and love of Jesus among Muslims. Muslims view Jesus as a great prophet with a unique place in the Quran, the holy book of Islam. Jesus is miraculously born to the Virgin Mary and can perform miracles. There is also an entire chapter dedicated to the Virgin Mary. Jesus is mentioned more times in the Quran than the prophet Muhammad. Sufi Muslims see Jesus as the spirit of God, or Ruh Allah. In Islam, he evokes humanity and peace. Great Muslim poets such as Rumi and Hafiz have echoed the spirit of the Quran in their verses dedicated to Jesus. Rumi famously expressed his love for Jesus in his “Jesus Poems” and Hafiz wrote the immortal verse:

“I am a hole in a flute through which blows the breath of Christ.

Listen to this music.”

Yet not many really acknowledge the bonds between the Abrahamic religions as the larger confrontation drowns out what is common and shared. Few efforts could therefore be more worthwhile than promoting good relations between these faiths, considering that together they form about half of the world’s population. The pope’s extraordinary initiatives therefore give us hope in our time of conflict and show us compassion in an age of indifference.

It is for this reason that the authors of this article, a Muslim and a Catholic, a professor and his former student who are like family in their regard for one another, offer, in humility and love, Salam and salutation to Pope Francis.

Ambassador Akbar Ahmed is the Ibn Khaldun Chair of Islamic Studies, American University, Washington DC and author of The Thistle and the Drone:How America’s war on terror became a global war on tribal Islam (Brookings Press 2013).Craig Considine is a doctoral candidate in the Department of Sociology at Trinity College, University of Dublin. He was Ahmed’s film director for “Journey into America” (2009), a documentary feature film on America and will direct the upcoming “Journey into Europe”.