Dara Shikoh: The Mingling of the Oceans Part-I

When in 1652 Dara Shikoh was formally declared the crown prince of the Mughal Empire his future seemed secure. He was given the title Padshahzada-i-Buzarg Martaba, son of the Emperor with the status of a Saint. He was also given the highest rank in the Mughal army which came with a command of 40,000 horse and 50,000 troops (Babar, the founder of the dynasty, had conquered India with about 10,000 troops). Dara Shikoh became the glittering symbol of the golden age of Mughal art, artists and architecture. Not only was he beloved of the emperor but the people of that vast empire had great hopes in him – the Sikh Guru Harrai, the celebrated Muslim mystic Mian Mir and the Hindu pundits who worked with him in translating the Upanishads held him in high esteem. When he fell seriously ill there were prayers for his recovery in mosques, temples and churches. 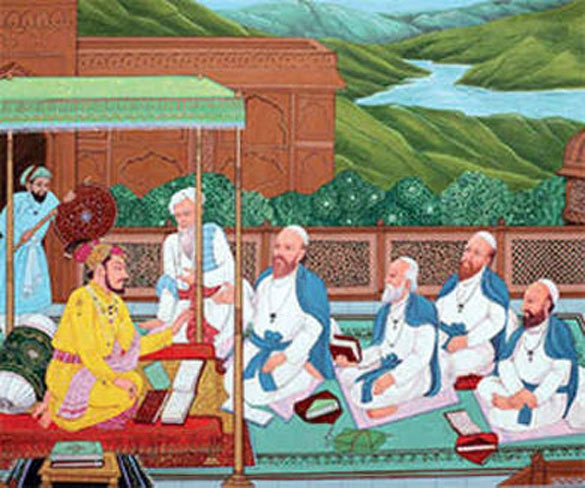 Millions were spent on his marriage to his cousin Nadira Banu Begum, the direct descendant of Akbar the Great, which was the stuff of legend. This after all was the future emperor of the richest empire in the world and both Dara and Nadira belonged to a dynasty known for extravagant ceremonies with excessive glitter and gold. Nothing like the lavish wedding had been seen before. The marriage is depicted in several brilliant miniatures. Unlike the male members of the dynasty who often had numerous wives and concubines, Dara was content married to Nadira Banu Begum. He had a happy relationship with her and addressed her as “dearest intimate friend”.

Dara Shikoh was then just preparing his seminal work, Majma-ul-Bahrain, the Mingling of the Oceans– from which we derive the title and concept for my article. Dara Shikoh, unlike the traditional mystic, was guided not only by the instincts of the heart but, a rare quality , also by rigorous reasoning. He laid out a thesis and then set out to marshal the evidence and prove the thesis correct. He proposed that the two great Oceans of faith, the Abrahamic and non-Abrahamic, are intrinsically linked. He called his study The Mingling or the Confluence of the Oceans. He was certain he had found the connection at the heart of the faiths. Having translated 50 Upanishads with the aid of learned pundits he argued they were in fact nothing less than the Kitab el Maknun or the ” secret verses” of the holy Quran. This he called the Sirr -e -Akbar or the Great Secret. He had found the bridge between the Abrahamic faiths, here represented by Islam, and the non-Abrahamic religions represented by Hinduism. Together they represented a major percentage of the world’s population. In terms of milestones in religious literature, Dara’s Majma is no less significant as Augustine’s The City of God and Aquinas’s Summa Theologica.

Yet Dara Shikoh’s world would change abruptly. The Greeks have a word for it – given to us by Aristotle: it is peripeteia. This concept is at the heart of what we know as Greek tragedy.

Dara was playing a dangerous game. He should have heeded Nizamuddin Auliya the Saint of Delhi who famously had two large arched doors one in front of his seat where he received visitors and one behind him. When people asked him about the gate at the back he replied: if I see the king or governor entering from the front gate I will disappear from the back. In short, a true Sufi stays far from power which is seen as corrupt and corrupting.

In less than a decade from the time he was welcomed as the crown prince; he was betrayed, deserted and executed. He was roundly defeated at Samurgarh near Agra. Dara was then chased by the Mughal army while Aurangzeb turned to deal with another brother. Dara kept one step ahead of the imperial army losing every skirmish and seeing his supporters dwindling. There was no hope and no help from any quarter. He was now so disoriented and pessimistic that his beloved wife Nadira Begum could not bear to see her beloved prince falling apart. She took her life, further plunging Dara into deeper gloom. The great imperial philosopher and mystic who promoted love and compassion was now totally alone. He had no idea how to deal with his predicament. At this point he was betrayed by his host Jiwan Khan and handed over to Aurangzeb who was ready to have him tried and declared an apostate. The death sentence followed. But not before one final indignity. Dara was dressed in rags and placed on an old sickly elephant covered in dirt and paraded in Delhi. The crowds who had been encouraged to turn out and see their beloved Dara were shocked and turned their backs in protest. When Jiwan Khan rode by he was greeted with catcalls and booing. But no one pulled a sword to protest the condition of Dara. His once loyal supporters were ready to follow him to temples and mosques but there was a clear boundary beyond which they would not proceed.

Not for the first – or last- time was a Mughal prince realizing it is a lonely, cruel and cold world when he is stripped of power and privilege; that failure has no fathers and even close friends disappear at its sight. Just as Dara appeared bold and successful in his interfaith endeavours, on the battlefield he was unsure, lacked fire and exhibited poor leadership. As a rule a Sufi mystic makes for a poor general and it is best for all concerned if he not be given charge of an army in combat.

Dara waving a sword sitting atop a battle elephant was as incongruous in the imagination as Aurangzeb, after imprisoning his father and doing away with brothers, nephews and sons, in the guise of an austere fasting Saint humbly bowed on a prayer mat before God. These images challenge us precisely because the discussion about these two brothers is cast in the form of straightforward binaries: the elder brother, the crown prince, wanting peace and harmony with all versus the evil and violent younger brother plotting to usurp the throne. The reality is much more complex and hints that the brothers are locked in a bitter sibling rivalry as much as fighting for the throne. Aurangzeb after he executed Dara taking Dara’s favourite Hindu protégé into his own harem and killing the mystic Sarmad, Dara’s favourite, when he was no threat may be explained more in terms of psychological compulsions than political gains alone.

Original Headline: The Mingling of the Oceans Part-I