It started with his father.

As fighting and instability ravaged Iraqi villages and cities, a local Shiite militia offered a means for him to save his family and himself: convert from Christianity to Islam, and gain not only protection but the promise of eternity in heaven. Or, they said, he could remain a Christian, and put his life and his children’s at risk. 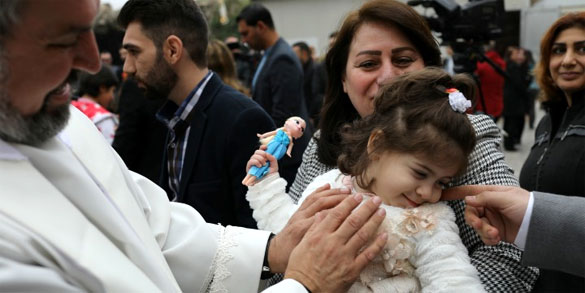 A priest plays with a child after a mass on Christmas at St George Chaldean Catholic Church in Baghdad, Iraq December 25, 2018. Photo: REUTERS/Thaier Al-Sudani.

Then he demanded all his children do the same. “One daughter fled the home,” Muna Tagi, a friend of the family based in the United States, related in an email. “The teenage son was expelled from the home, but eventually came back as he had nowhere to stay, and had to be forced, along with his other sister, to convert their IDs to show them as Muslims.”

Despite their conversion, however, the two teens secretly continued to wear their crosses beneath their clothes — until their Shiite friend discovered them. “The friend … cut it from the teen’s neck and threw it in the mud,” Tagi said. Soon after, the boy received a letter, signed in blood, accompanied by a single bullet.

Such forced conversions are becoming increasingly common in post-Saddam Iraq, extending beyond the 2014 capture and enslavement of Yazidis, and not only because of the violence of ISIS militants. Under Saddam, Christians were largely left alone. Now, says Tagi, churches and Christian communities have come under violent attack because of Shiite rule, Islamist militancy, and Al-Qaeda’s revitalization. Many Christians have faced torture, especially by ISIS militants, who beat them when they could not repeat passages from the Quran.

Unsurprisingly, then, Christians have fled the country in droves: over 1 million have sought sanctuary either in the West or in the country’s more tolerant Kurdish areas, leaving a mere 500,000 Christians in Iraq struggling for survival. Thousands who escaped ISIS in 2014 now live in semi-permanent camps, knowing they may never return home. And while most continue to resist conversion, more and more are starting to give in.

It isn’t just Iraq. In Algeria, the Algemeiner reported earlier this year, the government “prohibited Christians and other non-Muslims from speaking publicly about their faith, for fear of influencing Muslims.” Moreover, “any Muslim accused of approaching Christians for the purpose of learning more about their faith or beliefs could face years in prison and a hefty fine.”

And in Nigeria, home to 80 million Christians (versus 90 million Muslims), Boko Haram and Hausa Fulani militants have made the country one of the most dangerous in the world for Christians, with an estimated 7,000 Nigerian Christians executed since 2015 for their religion. In its 2019 religious freedom report, the US State Department reported that “Muslim Fulani herdsmen killed 17 Christians who had gathered after a baby dedication at a Baptist church … including the mother of the child.” They were but a few of the 1,350 Christians estimated to have been killed in Nigeria last year.

And 2020 is turning out to be similarly horrific, warns the Alabama Baptist. A video posted to YouTube on July 22, for instance, shows the execution of five Christian men, and a report issued by former MP Lord David Alton, co-founder of the Movement for Christian Democracy, counts at least 27 murders of Christians during the 24 hours between July 19-20.

But it isn’t only the fear of violence that is driving conversions to Islam. While the New York Times reports that the “forced conversions of Hindu girls and women to Islam through kidnapping and coerced marriages occur throughout Pakistan,” other Muslim groups use bribery to seduce impoverished Hindus, Sikhs, and Christians to abandon their faith. Indeed, in June, several dozen Hindus converted in a mass ceremony in South Pakistan seeking to escape the constant discrimination — in jobs, housing, and society — that Hindus typically experience in the Muslim majority country.

“The dehumanization of minorities coupled with these very scary times we are living in — a weak economy and now the pandemic — we may see a raft of people converting to Islam to stave off violence or hunger or just to live to see another day,” former Pakistani lawmaker Farahnaz Ispahani told the Times in August.

One wealthy Muslim in Pakistan has taken particular advantage of the current economic crisis. In a video posted on the social media site TikTok, Mian Kashif Zameer Chohadary announced his plan to pay 200,000 rupees (about $2,000) to any Christian who converts to Islam — with 1 million rupees (nearly $6,000) for a family. “Please accept Islam,” he says in the video, “which is the best religion.” The video, according to AsiaNews, quickly went viral.

Yet even these non-violent methods are problematic, the Times reports, noting that: “Hindu rights groups are also troubled by the seemingly voluntary conversions, saying they take place under such economic duress that they are tantamount to a forced conversion anyway.” Moreover, once non-Muslims convert to Islam, they are unable to return to their former religion: apostasy is punishable by death in Islam, and many countries — including Iraq and Pakistan — consider it a capital offense.

For her part, Muna Tagi is equally troubled about the situation in Iraq. “My concern for Iraqi Christians, at present, is that there are many unreported incidents like this one, never known … [for fear of] retaliation. And I strongly believe it will get worse in the future, as … each conversion success will empower these militia[s] to pursue the next.”

It is largely, then, up to the West to aid these endangered families: “Open, firm talk between leaders of the west and Iraqi government is [needed] first,” Tagi believes. And second, “to help these families to migrate, if they choose to do so.”

Abigail R. Esman is a freelance writer based in New York and the Netherlands. She is the author of Radical State: How Jihad Is Winning Over Democracy in the West (Praeger, 2010). Her next book, Rage: Narcissism, Patriarchy, and the Culture of Terrorism, will be published by Potomac Books in October, 2020.