The Spirit of Shanti and Salaam: Transforming Hindu-Muslim Dialogue into Action

By Aamir Hussain and Murali Balaji

The United States is truly exceptional in the fact that it "peacefully combines a high degree of religious devotion with tremendous religious diversity" (Putnam and Campbell, American Grace). Interfaith understanding is a central part of our nation's history, from George Washington's letter to the Newport, Rhode Island synagogue to the first Parliament of the World's Religions in Chicago in 1893, to the 1960s Civil Rights Movement led by diverse faith leaders.

The challenge for our millennial generation is to continue translating America's religious diversity into social action. The vast majority of interfaith efforts in the United States currently focus on the Abrahamic religions of Judaism, Christianity and Islam. While such efforts are important, it is also necessary to engage with the growing numbers of Americans who identify with a diversity of other faith and spiritual traditions. In particular, we see great potential for interfaith initiatives between Hindus and Muslims, two groups that share similar experiences in the United States. 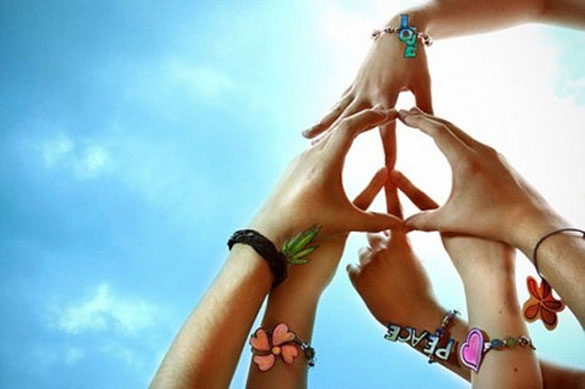 For starters, Hindus and Muslims share similar demographics. Each comprise roughly one to two percent of the American population, with large proportions of both communities coming from first and second-generation immigrant families with South Asian heritage. As a result, xenophobia is often a major issue for both communities, with both group facing allegations that they are "not American enough." At the heart of the interfaith engagement between Hindus and Muslims should be a fundamental acknowledgment that both groups are small minorities in the United States, and that a coalition of voices is the best way to achieve pluralistic outcomes. Such an approach doesn't mean that we have to gloss over our philosophical differences (or agree on various social, theological, or ethical issues), but instead maximizes our embrace of religious and cultural diversity.

The Interfaith Youth Core (IFYC), one of the most well-known interfaith organizations in the United States, advocates for such a model. IFYC and its founding director, Dr. Eboo Patel -- who advised President Obama on issues of religion in the United States -- believe that interfaith cooperation is achieved through a combination of three factors: Respect for people's diverse religious and non-religious identities, mutually inspiring relationships between people of different backgrounds, and common action for the common good. IFYC's Better Together Campaign seeks to promote interfaith action for social justice on college campuses, recognizing that universities are fertile ground for inter-religious dialogue and community service.

In April 2012, I (Aamir) started Shanti and Salaam, the first Hindu-Muslim dialogue in Georgetown University's history. This event brought together Hindu and Muslim students to discuss various social issues as well as their own faith experiences at a Jesuit-Catholic university. Rather than compromising or apologizing for their beliefs, the students actually reported becoming stronger in their faiths by engaging with the religious other. They also saw the similarities between both faiths, particularly in each religion's emphasis on embracing diversity. For example, the Quran states that among God's signs is the diversity in languages and colours of mankind, and that God created mankind into various nations and tribes so that we would come to understand one another (Quran 30:22 and 49:13). Hindus emphasize the equality in all and an acceptance of many paths to God, epitomized by the Rig Veda verse: "The Truth is One; The Wise Call It Many Names."

However, having great discussions is just the beginning -- not the end result. Indeed, the goal of these efforts is to understand that Hindus and Muslims can and should be part of the effort to promote religious pluralism in policy, education, and social discourses.

So what are some examples of what these groups can do together?

Hindu-Americans must join with their Muslim-American friends and cohorts to stand up against racial profiling and discrimination, and to ensure that Islamophobia is combated by a united front of diverse faith groups. Likewise, Muslim-Americans can help to fight stereotypes about Hindus that have led to years of misrepresentations about the religion. For both Hindus and Muslims, combatting these prejudices is critical since Hindu and Muslim victims of bullying and hate crimes are often targeted for the way they look, as what happened to Sunando Sen in December 2012. Hindus and Muslims can also work together to fight bullying in the classrooms, while helping teachers develop a constructive understanding of both religions and those who practice them.

In American Grace, Putnam and Campbell also observed that American faith communities provide "social capital" that can be used to address community concerns. As Muslims and Hindus in the United States, it is up to us to leverage our faith identities for social justice, and to create a "more perfect union."