A Life-Size Sculpture of Maharaja Ranjit Singh Unveiled On the Eve of His 180th Death Anniversary In Lahore: A Hero Of Pakistani Punjab? 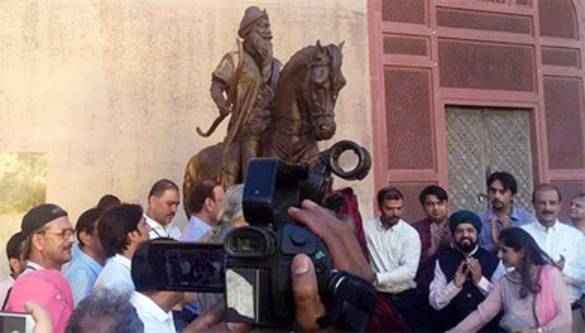 IMAGE: A life-size sculpture of Maharaja Ranjit Singh, who ruled over Punjab for four decades, being unveiled on the eve of his 180th death anniversary, in Lahore on June 27, 2019.

The statue is located outside the Sikh gallery at Lahore Fort. Photograph: PTI Photo

On Friday, June 28, this unusual report was published in Pakistan's Dawn newspaper, which was founded by Jinnah:

'In a colourful ceremony, the statue of the Sikh ruler Maharaja Ranjit Singh was unveiled at the Lahore Fort, at the Mai Jinda's Haveli, on Thursday evening.'

'The nine feet tall statue, made of cold bronze, shows the regal Sikh emperor sitting on a horse, sword in hand, complete in Sikh attire.'

'Sculpted by local artists, under the aegis of the Fakir Khana Museum, the statue is meant to invoke the feeling of the emperor being present, with its real life proportions, and was unveiled on his 180th death anniversary. Ranjt Singh passed away in 1839.'

'The unveiling ceremony was highlighted by some daring gatka performances, or Sikh martial arts, where young boys displayed the different styles of attacking and sparring with various tools, including sticks that intend to simulate swords, a spiked ball and chain, and other weapons.'

'The performances showed how a stealthily-trained warrior could manage to do the most daring feats, such as in the display of this skill, the stick or gatka wielding warrior easily broke earthen pots, and coconuts balanced on others's heads, while two expert warriors sparred inside a circle of fire.'

Another unusual report was published on March 24, 2019: 'A motley group of followers of Bhagat Singh, Rajguru and Sukhdev Saturday paid tributes to the trio on their 88th martyrdom anniversary at Shadman Chowk in Lahore city of Pakistan, the spot which was once a part of a jail where they were hanged by the British on March 23, 1931.'

'The spot reverberated with the chants of 'Bhagat Singh Zinda Hai' and 'Shaheed Bhagat Singh Teri Soch Tey, Pehra Denge Thok Ke' as Lahore residents, including women and children, with candles in their hands, paid tributes to the martyrs.

'The initiative was spearheaded by the Bhagat Singh Memorial Foundation, which is run by Imtiaz Rashid Qureshi who had also filed a petition in the Lahore high court to rename Shadman Chowk as 'Shaheed Bhagat Singh Chowk'.'

The question is why Pakistan thinks that these men are celebrated when India is going through a strong anti-Muslim phase. And it is because Pakistan also has a powerful Punjabi nationalism.

More than half of Pakistan is Punjabi speaking. Of Pakistan's five biggest cities, four -- Lahore, Rawalpindi, Gujranwala and Faisalabad -- are in Punjab. About 80% of the Pakistani army is Punjabi.

The Sikh empire of Ranjit Singh was the only time in Indian history when Punjabis dominated northern India, and Singh is seen as a Punjabi hero, which he was.

Ranjit Singh's armies marched into Kabul and he and Tipu Sultan were the last real independent rulers in a subcontinent when the British had defeated the rest.

He was a great warrior and it is only after the death of Ranjit Singh, that the British were able to conquer Punjab.

It may interest readers to know that the reason why the Dogra Rajputs of Jammu rule Kashmir was their betrayal of Punjab. Without this betrayal, Jammu and Kashmir would be two separate states today.

To know how big the prize was, consider this: There were only 5 kingdoms in India which were big enough for their rulers to merit the 21-gun salute: Mysore, Hyderabad, Baroda, Gwalior and Jammu and Kashmir.

Most Indians do not know that the history of 18th century India, after the death of Aurangzeb, was a series of attacks by one Hindu hero against another.

The Marathas extorted so much money from the Rajputs that Maharaja Ishwari Singh, son of Jaipur's founder Sawai Jai Singh, committed suicide in December 1750.

In revenge, on January 10, the Rajputs spent nine hours slaughtering a troop of 4,000 Marathas who had entered the city as conquerors.

This is not taught in our history books. Knowledge of this will confuse most Indians because our understanding is coloured by our religious nationalism.

In Pakistan there has been no problem about the installation of the statues of these men, unlike the Jinnah portrait or other controversies that seem to be present in India these days quite regularly.

As Indians we do not expect that our heroes are given any space in Pakistan, and that is why I say that these reports seem strange. But the fact is that Indians are mostly ignorant of Pakistan and our knowledge is second-hand and comes from a deranged Indian media.

Aakar Patel -- winner of the 2018 Prem Bhatia Award for Political Reporting -- is Executive Director, Amnesty International India. The views expressed here are his own.