Moving Towards Oneness, for the common social good, recognizing this is mandated by the One God, the God of us all

A Report on an Interfaith Get-Together 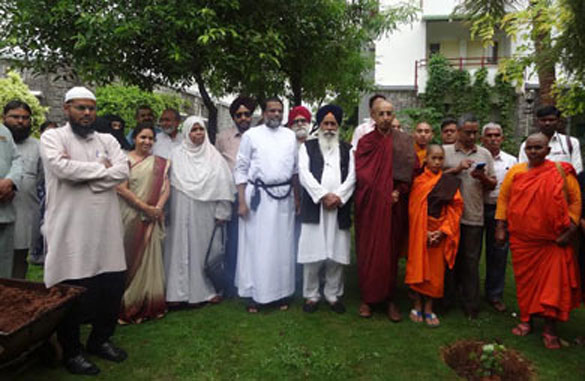 Interfaith dialogue is today a pressing necessity in order to overcome deep-rooted negative images about other religions and their adherents and to resolve inter-communal conflicts (in which distorted, supremacist and exclusivist interpretations of religion often have a major role to play). Such dialogue is also essential in order to bring people of different faith backgrounds to work together to address common social concerns (such as, for instance, the ecological crisis or the perceived crisis of values) that affect all religious communities. Further, by affording an opportunity to benefit from the wisdom contained in other religious traditions and to be inspired by people of other faiths, interfaith sharing can help individuals in their own spiritual journeys.

Interfaith dialogue and inter-communal harmony are a major focus of the Hyderabad-based Henry Martyn Institute, which has been engaged in this field for several decades. Recently (8th-10th August), the institute organized a three-day interfaith programme, which brought together several people from various faith communities. The theme of the get-together was ‘Explore-Experience-Evolve Towards Oneness’. Participants shared with each other some basic tenets of their respective religions, highlighting particularly teachings about the Oneness of God or Ultimate Reality and the oneness of creation, including humanity.

In his presentation, Prof. C.S.R. Prabhu spoke about the concept of oneness from the perspective of the tradition of Non-Dualism in Hinduism, according to which the individual soul is one with the God, which can be realized by overcoming attachments and negative tendencies so that one finally realizes oneness with everything.

Shri Kasturchand Manicklal Jhabak spoke about teachings related to oneness in the Jain tradition, such as living and letting others live, forgiveness and inner reform. He suggested that just as the countries of the world have got together to form a United Nations, there should be a united platform for the different religions.

In his presentation, Dr. Packiam Samuel, Director of the Henry Martyn Institute, reflected on the theme of interfaith harmony from the Christian tradition. He spoke about how the Christian scriptures are interpreted diversely, from different standpoints, and underscored the need for contextual exegesis. In this regard, he highlighted selected incidents mentioned in the Bible that can be interpreted to underscore respect for religious pluralism.

Dhammapala Bhante, a Theravada Buddhist monk, explained that from the perspective of the Buddhist tradition, the starting point or basis of oneness is universal suffering. He stressed that one must first work on one’s own self, developing awareness of one’s mind and body, for which Buddhism stresses meditation. A person who is suitably transformed through meditative practices can become a force for great good in the world, reflecting compassion through his very being and in all his actions.

Dr. Syed Naqi Mehdi spoke about on the notion of the Oneness of God in Islam and respect for religious pluralism as reflected in the Quran and in the life of the Prophet Muhammad (such as the Medina Declaration, that guaranteed the rights of inhabitants of Medina irrespective of religion, and the Hudaibiyyah peace treaty between the Prophet and his Meccan opponents).

The Oneness of God and of the equality of all human beings is a basic teaching of the Sikh Gurus, Dr. Raminder Kaur stressed in her presentation.  The Sri Guru Granth Sahib, the Sikh Holy Scripture, contains verses by saints from different religious and caste backgrounds, including Sikhs, Muslims, and Hindus, this reflecting the central teaching of the Gurus of the oneness of all humanity and the oneness of the teachings of the realized spiritual masters from different traditions.

The programme afforded ample opportunity for participants to get to know each other and to have lively conversations at lunch-time and some fun-filled moments over a cup of tea. Participants felt that such programmes were really the need of the hour.

Religious differences will remain: we cannot wish them away. But what we can do is to learn to accept and live with them and even to learn and benefit from them while working together with people of diverse religious backgrounds for the common social good, recognizing this is mandated by the One God, the God of us all.