By Mohammad Ali, The Hindu 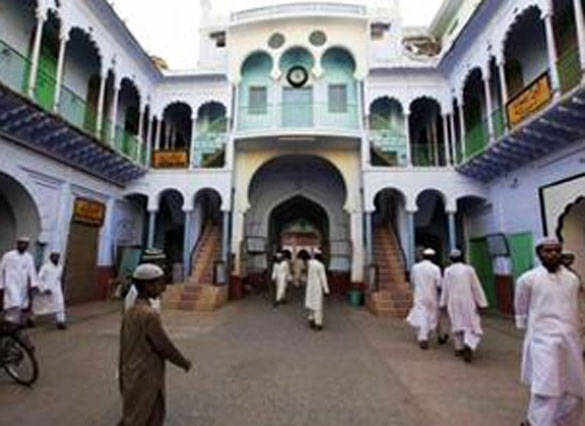 In a fatwa issued to Muslims, the seminary said the slogan goes against “tauheed” (the idea of worshipping one god), which forms the core of Islam.

Amid an ongoing debate in the country over “Bharat Mata ki jai”, Darul-Uloom Deoband, the leading Islamic seminary of the Indian subcontinent, on Friday said that chanting of the slogan was against Islam. In a fatwa issued to Muslims, the seminary said Muslims should not chant the slogan because it goes against “tauheed” (the idea of worshipping the only God) which forms the core of Islam. Darul-Uloom Deoband referred to the Constitution of India and said forcing people to chant the slogan goes against the Constitution of India which allows its citizens to practice their own faiths.

The fatwa comes days after it was reported from the national capital that a madrassa student was allegedly beaten by some people after he refused to chant the slogan, “Bharat Mata ki jai”. The seminary issued the fatwa in response to several letters from Muslims asking it's view about chanting the slogan which has seen intense polarisation over the issue.

The BJP reacted strongly to the fatwa with Union Minister Sadhvi Niranjan Jyoti saying that by giving such an opinion the seminary “behaved like a hardliner”.

The fatwa, a copy of which is with The Hindu, said, “After the 'Vande Mataram' controversy, now people are being forced to chant 'bharat mata ki jai'. Actually, some of the believers in Hindu faith consider India a goddess whom they worship. They treat the goddess 'bharat mata' the patron God and caretaker of the country. This belief certainly goes against the very idea of 'tauheed' which forms the core of belief in Islam. The followers of Islam cannot compromise with the idea of 'tauheed'“.

The fatwa went on to explain in detail about the idea of love for the country, and said, “India is our motherland and we love it a lot. But we cannot worship even our motherland because of the essential belief that we worship only one God and that is Allah”.

But scholars like Sultan Shahin, editor of NewAgeIslam.com, a website which talks about advocating reforms in Islam, slightly disagreed with the way the seminary interpreted the slogan 'bharat mata ki jai'.

While the Darul-Uloom Deoband said chanting the slogan means “hailing and worshipping” the goddess “bharat mata', Mr. Shahin said, the slogan did not amount to worshipping 'bharat mata' and hence did not go against the idea of 'tauheed' (the belief in oneness of God).

“Primarily the idea of tauheed is believing into one God. However, there is a variety of interpretation of god and tauheed in Islam. The idea of tauheed (oneness of god) is vast enough to accommodate the idea of praising the motherland and showing love for her. I would not like to go into literal translation of Vandana or saying 'bharat mata ki jai' because I find the controversy unnecessary and irrelevant as there are enough controversies around the idea plaguing us,” said Mr. Shahin.

Talking about a variety of interpretation of 'tauheed', Mr. Shahin presented the instance of Sufis traditions in Islam and said that “a section of Islamic scholars, find even Sufi practices like going to Sufi Dargahs and praying to Sufi saints as against the idea of tauheed. Does that make Sufism un-Islamic? I do not think so. All version of oneness of God are right but none should be forced on anybody”.

But Mr. Shahin also said that the slogan 'bharat mata ki Jai' should not be forced on anyone as the Constitution did not require anyone chant the slogan.

Three students beaten up in Begampur

By Shubhomoy Sikdar, The Hindu 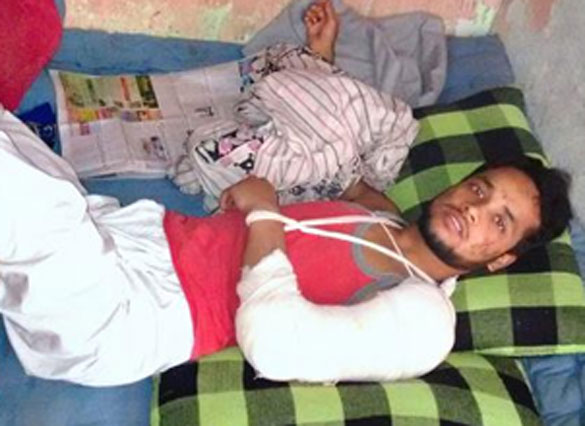 Dilkash, one of the three injured, claimed that he fractured his hand in the scuffle.Photo: Special Arrangement

Three Muslim youth claim they were beaten up by unidentified men at a park in Outer Delhi’s Begampur area on Saturday, allegedly because they refused to chant slogans such as “Jai Mata Ki” and “Bharat Mata Ki Jai”.

While the incident took place on March 26 and police complaint submitted the same day, a police case was registered late on Tuesday evening.

“We are trying to zero in on the accused and also need to verify the sequence. For now we have registered a case of causing hurt and wrongful restraint as further probe in the case is on,” said a police officer.

The victims — Dilkash, Ajmal and Naeem — all aged around 18, are students of a madrasa and live in Mohammadi Mosque in Ramesh Enclave. Dilkash claimed his hand was fractured in the incident.

While the boys claimed the attack on them was unprovoked, a police officer said the sequence of events would be established only after the suspects are arrested.

“We were taking a stroll around the park when one of the five men hit Ajmal on the back of his head. Before we could make sense of what was going on, they started abusing us and ordered us to chant Jai Mata Ki, which we refused to do,” said Dilkash. Ajmal and Naeem added that they were asked to chant slogans such as Bharat Mata Ki Jai and Pakistan Murdabad.

But, the refusals met with an instant backlash as the attackers thrashed them with green bamboo stalks. The boys claimed that somehow they managed to escape and run back to the mosque before calling the police control room. The police then took them to the Sanjay Gandhi Hospital.

Dilkash’s injuries were more severe than that of the other two. While speaking to The Hindu, the boys claimed they had seen the suspects in the area in the past and a couple of them stayed in an adjoining locality but said they had no enmity or even acquaintance with them. In his statement to the police, however, Dilkash has given two names – Pintu and Sahil – but without added details such as addresses or names.

“We were waiting to receive the medical reports,” said the officer explaining the reasons for the delay in registering a case. Meanwhile area residents said there was no history of communal tension despite the mixed population.