The Salman Rushdie Saga: The ‘Protocols of the Elders of Zion’ — Alive and Well World Over 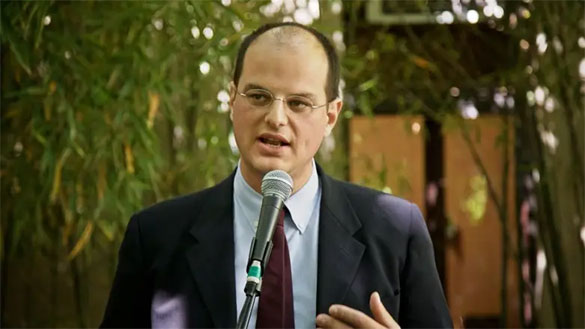 Salman Rushdie, the author of “The Satanic Verses”, was quietly deleted from India’s Jaipur Literature Festival after the protests of the Darul Uloom Deoband seminary – one of Islam’s most powerful bodies.

Rushdie went into hiding after the late Ayatollah Ruhollah Khomeini, the Iranian Shia leader, issued a fatwa calling for his death.

Rushdie’s saga is now, in many parts of the Islamic world, associated with a “Zionist plot” and the “Protocols of the Elders of Zion”, a short book concocted by the czarist police and presented as minutes of a secret meeting where Jews plotted world domination.

According to Iranian officials, Rushdie is a “mercenary author masterminded by Zionism, Britain and the United States of America”. Today Iran is one of the major world printers of the “Protocols”, the only book that has ever had the perverse distinction of being both globally influential and, at the same time, a forgery.

There is no accurate information on the sales of the “Protocols”, but it is undoubtedly one of the best sellers of all time.

Unfortunately, the “Protocols” rarely attracts Western attention, as we like to think that it is just a bad joke. We closed our eyes for too long.

In 1983, Yasser Arafat sent a letter to the UN secretary- general accusing Jews of “poisoning Palestinian schoolgirls”. It was the beginning of the monstrous Palestinian ideology.

Originally, the “Protocols” was meant as a warning to good Russian youths. The message: Beware of the machinations of the Jews, whose hidden aim is the subjugation of the Christian world.

Now the book is one of the most powerful propaganda tools of the Arab and Islamic world.

The only time the Protocols’ popularity dipped was immediately following the Holocaust. One suspects it was a little difficult to reconcile Jewish control of the world with the obliteration of a third of the Jewish people. But soon rationalizations began to appear.

On December 27, 2011, the Palestinian-Lebanese historian Bayan Nuwayhed Al-Hout published an article in the Lebanese daily Al-Akhbar, which dealt, among other things, with the “Protocols” and their connection to Judaism, the Zionist movement and the State of Israel. In her article, Al-Hout claims that the “the Protocols completely correspond to the words of the great Rabbis throughout the ages, and to the Talmud itself. The Chosen People is a basic Talmudic concept, meaning the people who were chosen to rule and dictate”.

Arab anti-Semitism has adopted all of Europe’s anti- Semitic myths. The “Protocols” are now prominently displayed not only in the Middle East, but also on the Western and Christian bookshelf. Though they are a proven forgery, they nevertheless receive worldwide recognition by those who seek to rely on them for promoting their own nefarious purposes.

Regrettably, the book has also become the gospel of black anti-Semitism in the America. And ironically, the “Protocols” was on the banned list in South Africa for 80 years before the universally acclaimed anti-apartheid liberalization removed the ban.

The resurgence of anti-Semitic literature in Eastern Europe following the removal of total state control of speech and press also presents a dilemma for democrats.

A Chinese bestseller, entitled “The Currency War” and based on the “Protocols”, describes how Jews are planning to control the world by manipulating the financial system.

An Iranian stand at the latest Frankfurt Book Fair presented a copy of the “Protocols” published in English by the Islamic Republic of Iran in plain view. Iranian president Mahmoud Ahmadinejad claimed to have distributed the “Protocols” to expose “the real visage of this satanic enemy” (Israel).

Ahmadinejad got his language on the Israelis as “cancer” and “vermin” from Professor Johann Von Leers, the specialist in the “Protocols” appointed full professor at the University of Jena by Alfred Rosenberg, official Nazi “philosopher”. Von Leers was used to compare the Jews to “cholera germs”.

Thousands of Jews have been killed in Europe because of this infamous document. Hitler used it as a manual in his war to burn all the Jews and Palestinian suicide bombers have been found with the “Protocols” in their pockets.

Now even some Christian bishops are quoting from the “Protocols.” In an interview with George Saliba, Bishop of the Syrian Orthodox Church in Lebanon, aired on Al-Dunya TV on July 24, 2011, declared: “Any intelligent person who reads the ‘Protocols of the Elders of Zion will see the extent of its influence on the politics of our region and the world”.

The Protocols is now a central issue in Muslim propaganda, even in what we call moderate countries, including countries that made “peace” with Israel, such as Egypt and Jordan. The “Protocols” is everywhere, at every Arabic book fair, it is in public discourse, in newspapers, in TV soap operas. The “Protocols” are now on prominent display also at the Malaysian capital’s International Airport and an Arabic translation of the “Protocols” can be found on the website of the Palestinian Authority’s Ministry of Information.

Giulio Meotti is the author of the book "A New Shoah."