I Used To Be an Islamist: Ahmad Mansour Tells Of How He Turned His Back on the Allure of Salafism 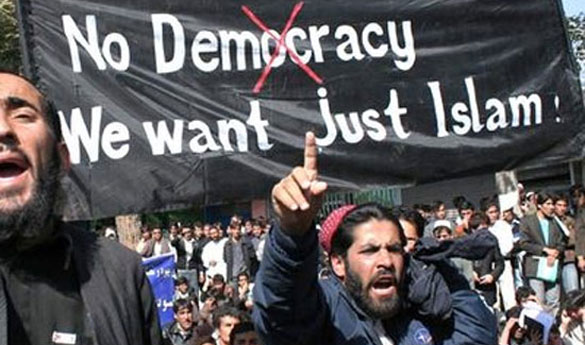 At 13-years of age, I was a shy boy with wild curly hair. I was keen on playing football and I would regularly quarrel with my grandparents. Until then, the world I knew reached the end of our dusty Arab village near Tel Aviv.

I was a good pupil, but had difficulties finding friends, because my shyness often got in the way. So I felt flattered when one day our local imam took an interest in me. He stopped me on my way to school telling me he wanted to talk to me.

After telling me I was a good boy, he said he saw potential in me for bigger things. When he proclaimed: “Islam needs you, my son!” I listened to him with wide eyes and open ears.

“All At Once I Was Among the Chosen Ones”

Shortly afterwards and in an auspicious gesture, he invited me to attend his Koran classes. The presence of this impressive, elderly man with a full beard and bushy eyebrows, made me think that I was among the chosen ones. Although my parents were not very happy – they were anti- religious at the time – they preferred that I learnt something useful instead of joining a local youth gang, like the boy next door.

With this inner alienation, I slowly found my interest in girls started to exceed my fear of hell and I was on my way out of this ideological grip. But hardly anyone else in the Islamic school had the same experience, and most of them remained true to their beliefs and became followers of either the Muslim Brotherhood or Salafists.

Finding Relief Was A Long Process

At the University of Tel Aviv as a psychology student, I began to read Freud and learn about history and sociology and discussed these topics with other students. Gradually I broke away from the imam and other religious authorities. Liberation came after a lengthy process and to this day, it sometimes causes me guilt to have a glass of wine. But nowadays at least I can smile about it.

To complete my studies, I went to Berlin’s Humboldt University in 2005. Since then, I have collaborated on projects with the aim of sparking dialogue with fellow Muslim citizens. With both adolescents and adults, we discuss radicalisation, anti-Semitism and violence in education. In many conversations I experienced how somebody could start finally to think for himself.

But I am becoming more frightened when I see what is happening in Germany today. Radical varieties of Islam are not only gaining currency in migrant communities, but also among Germans. Salafists, just like my former imam, are trying to win children and young people over. Preachers like Abu Nagi or Pierre Vogel and their followers provide refuge, acceptance and guidance to children and adolescents.

While the setting has changed, the content remains the same. With just a few clicks of a mouse, young people can find websites on the Internet in German, advertising a type of Islam that seems pure and full of promise, which uses enticing design, sounds and video games. Bearded Salafists acting as self-appointed street workers seek to gather young people away from drugs and alcohol and instead offer religion as a substitute:

At workshops I hear complaints from the parents of German converts, who say that their children refuse to celebrate their birthdays as they call it Haram or impure and at Christmas and Easter time they don’t want to have anything to do with the family.

Meanwhile the (German) Interior Ministry has since broken up several Salafist associations like Dawa FFM and Islamische Audios. But its ideologues remain and new associations have since sprung up. About 10,000 people are classed as organised Salafists and their sympathisers are estimated to be ten times that figure.

Once adolescents come under the spell of Salafist preachers they begin to act as cult members: limp marionettes held by an iron hand. Critical thinking is not tolerated. They learn about a God who does not listen to reason; doubts and individual feelings are taboo.

It benefits the religious leaders that the average Muslim’s comprehension of Islam is composed of authoritarian features. Adolescents are left vulnerable to those who tell them what to do and how to behave. In some cases, it goes to the lengths of telling youths which foot to use when entering the bathroom, because they must follow the example of the Prophet Mohammed. In their eyes democracy is an abominable system, which leads to gay marriage and social ills.

Against the backdrop of my experience I ask people to monitor carefully Salafism and analyse its ideologies more clearly. Society shouldn’t allow itself to be misled and to only pay attention when Salafists and Islamists are preaching about the use of bombs. Indeed the jihadists, inspired by Salafists who are ready to use violence, are still a minority. But the security forces focus on just the incitement to violence, while ignoring other anti-democratic rhetoric.

Sometimes an imam who pays lip service to democracy is even celebrated as progressive and this is where the delusion begins. Violence doesn’t only occur when people are ready to kill in the name of religion. Problems in education and marriage also lead to violence, as does propaganda about gender-discrimination, the claim of exclusivity of one’s religion, the declining state of democracy, or the belief of having to save others from a godless life – all represent facets that can incite violence.

Unfortunately, some Muslim organisations use the current debate to scapegoat Salafists for all radical tendencies inside Islam. They try to disprove some of their own extremist views. Salafism has to be acknowledged as a phenomenon, which propagates an extreme version of Islam with cultish aspects.

Anybody who wants to combat Salafism in Germany has to grapple with it critically and differentiate it from Islam. Unfortunately many Muslim organisations shy away from this, as they are fearful of being tainted by association. Yet many still harbour admiration for Salafists as they consider them to be truly devout Muslims.

Right-wing populists are bent on implementing expulsion policies. On the left, there is a clear tendency to shy away from conflict and attribute the phenomenon of radicalised Muslims to discrimination in society.

To debate Salafism, one has to discuss the values and strengths of democracy. It has to be done without anxiety, judgment or taboos and must be undertaken within Muslim communities. There is a need for a re-interpretation of Islam, which accepts democracy and has clear positions with respect to a country’s constitution. Only via this route can Muslims find freedom of interpretation in Islam and democracy.

Our neighbourhood mosque was a white-washed building with a modest minaret and a turquoise gate. Each Thursday after evening prayers, we would gather for lessons in its coolly ventilated basement rooms. With its carpets and framed surahs, I found the place quite cozy and I enjoyed the coolness on hot summer days.

I still happily recall the first lessons. A whole new world opened up to me, and it was an intellectual sport to get one’s tongue around the Arabic words in the Koran. Our imam taught us the complexities of standard Arabic grammar and we listened to his interpretations and especially to his captivating portrayals of paradise with its blissful gardens, fresh springs and its many conveniences - which all fascinated me. To hear that I belonged to a people that had once been great and powerful filled me with exhilaration. But the best thing was I had finally found friends and we were united by a common purpose.

The Islamic school helped broaden my horizons. For the first time I could imagine a world beyond the edge of our village. In a ramshackle bus we would travel to seminars on Islam in other cities. There we saw imams who had attained superstar status. We accompanied our imam to weddings or excursions to lakes or sacred sites. Excitement had come into my once dreary life.

But it didn’t take long before the nature of the classes shifted. All of a sudden it was not about poetic Surahs or Arabic grammar. The focus shifted to frightening scenarios in which the imam evoked the oppression of the Umma, or community of believers, who had to fight for the liberation of Palestine. He forcefully spoke of the accursed Jews; the inevitable recapture of Spain; and finally the Islamisation of Europe.

Sinning started to play a major rule. Our imam was verbose on the matter. Women were particularly dangerous; looking at them was forbidden, holding hands was forbidden and unveiled women were doomed to hell.

From that moment we weren’t allowed to feel affection for our female classmates. Instead they became enemies; creatures intended to lead us astray. It even became natural for me to despise the really pretty girls and lose interest, since they already seemed unattainable. Apart from that, our neighbours, who secretly drank alcohol, were, also apparently damned.

Arab girls, Jews and drinking villagers were the prime enemies in our midst, but the imam disclosed that in the outside world there were more foes: Christians, Americans, Europeans, Nationalists and Communists. They were all our enemies and aligned with the Devil. Our imam preached that a cruel and agonizing death was in store for them. One day, in order to maximize our respect for his words, he subjected us to a dramatic test.

Late in the evening we went to our village cemetery in our imam’s old car. As we got out, we recognised the cemetery’s little wall in the darkness. The whole group followed the imam who was muttering Surahs. Around us there was nothing but the silver moonlight lighting our path between the graves. Finally we stood at the front of an open, freshly excavated grave. There the imam commanded us to stand around in a semicircle.

The test of courage: a bizarre initiation ceremony

With sudden and loud exclamations he said: “Think of your death! Think of your encounter with Allah! Bear in mind that you are all going to end here! Maybe tomorrow or in a month!” Then we were told to each climb down into the hole and lie flat one by one. It was a test of courage, but also a bizarre initiation ceremony. As we descended into the dugout one after another, the imam kept calling: “For all the people who didn’t follow Allah in their lives, snakes and demons are waiting in their graves to beat and torture them for all eternity!”

For me it was a traumatic experience, but none of us broke away; we remained faithful to the imam. The group’s cohesiveness and our aspirations to imitate Mohammed’s life, with its guidance and structure were too consuming. I believed I was in possession of a superior truth that was hidden from others. My fear of hell seemed logical, as it led me away from sinful desires. In this fundamentalist ideology I found security, though it undermined my self- confidence.

I became sceptical, however, when I discovered the imam had denied his own sister her share of the will when one of their parents had died. In the name of Allah he had grandiloquently given lectures about justice, which he believed every good Muslim should let prevail. This double standard proved more and more to be true and I soon realised that the preacher also used us to get re-elected in a town meeting.

Ahmad Mansour, EFD Policy Advisor, is an Arab-Israeli who has been living in Berlin since 2004. In addition, he is a Research Associate at the Centre for Democratic Culture, part of the Astiu Project (Conflict with Islamic extremism and ultra-nationalism) and is a member of the Prevention Work with Youths working group at the German Islam Conference