In the hullaballoo about the Aam Aadmi Party and Arvind Kejriwal’s ‘betrayal’ during Delhi riots and its ‘shocking’ U-turn in the case of Kanhaiya Kumar, everyone lost sight of a move with long-term significance. The Aam Aadmi Party is the first non-BJP party to make a successful transition to Narendra Modi’s New India. It has not just made peace with the political reality of Hindutva-style nationalism, but Kejriwal has also spotted a new opportunity in the political market. 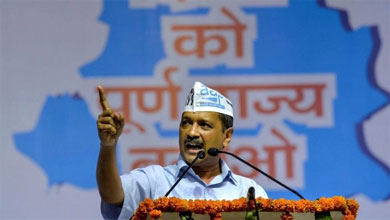 The growing demand for political Hindutva has opened up room for a second supplier that can compete with the BJP in packaging and delivering the same stuff better. That is how the Aam Aadmi Party (AAP) is now going to position itself.

A Pattern Of Action, Or Inaction

The AAP’s political moves since its spectacular electoral victory in Delhi assembly election have confirmed its new path. Granting sanction to try Kanhaiya Kumar, Umar Khalid and Anirban Das and others for sedition was a calculated political decision. The AAP spokesperson’s attempt to pass it off as a routine administrative sanction makes multiple demands on one’s credulity. One, this was no ordinary sanction for criminal prosecution, but for sedition, which is a political charge. Two, the case flies in the face of the Supreme Court’s directions about what should not be charged under sedition. Three, the Delhi government’s own legal adviser had reportedly found the case flimsy and advised the government not to grant sanction. And, finally, if it was a routine matter, why was the Delhi government sitting on it for more than a year?

Clearly, Arvind Kejriwal has decided that being seen as a sympathiser of Kanhaiya Kumar and Umar Khalid is a political liability for the party’s nationalist image and could come in the way of its expansion. In this light, the party’s seemingly odd stand welcoming the scrapping of Article 370 and dissolution of the state of Jammu and Kashmir makes greater sense. Notwithstanding some gestures to diversity and federalism, the AAP is going to operate within the four walls of homogenising nationalism that seeks unity in uniformity. If anything, its nationalism could be ‘harder’ and more reckless than that of the BJP.

Delhi’s ruling party’s conduct during the recent violence shows another facet of its political positioning. Its studied silence on secularism and distance from Shaheen Bagh during the election campaign could be seen as a smart electoral tactic. But its deliberate inaction during the city’s worst Hindu-Muslim violence since Partition shows a carefully chosen political line. Harsh Mander, with his long experience of handling and monitoring communal violence, lists a series of things that the AAP government could have done and chose not to. The party that won a historic mandate in the city was nowhere to be seen trying to bring peace on the ground or giving confidence to the victims.

The Kejriwal government did not use its administrative apparatus to limit the damage and dragged its feet in carrying out rescue and relief operations. Far from proactively doing whatever it could for the victims, it seemed relieved that it did not need to get into this mess. This was not administrative ineptitude, but lack of political will. Or rather, it was a studied political stance that steered cleared of annoying the Hindu majority.

To be sure, the AAP is not an anti-Muslim party, not yet. But its willingness to stand up for the minorities will be circumscribed by what the prevailing majority sentiment is willing to allow. Like the Congress or the Samajwadi Party, the AAP knows that the Muslims in Delhi have no option except to vote for it. It is anxious not to lose Hindu votes by being seen as pro-Muslim. This is in line with the party’s readiness not just to accept the Ayodhya verdict but also welcome it.

Based on all this, it would be wrong to dub the AAP as ‘Team B’ of the BJP. Such labelling insinuates that the AAP would electorally help the BJP. Far from it, the AAP could prove to be a keen, even fierce, competitor for the BJP in some parts of the country.

Ideological proximity does not lead to friendly matches; more often than not, it results in an intense, bitter and personalised fight. In all likelihood, the AAP will eschew any overall political perspective, avoid taking the BJP on secularism and democracy and focus its critique only on governance-related matters. We need to look for other labels for its ideological positioning. ‘Soft-Hindutva’ is a correct but inadequate description. The party’s hard nationalism may be more central to its positioning. Those looking for a challenge to the neo-liberal model of economics in this party may be in for a disappointment when they confront its economic policy or rather its absence. Soft Hindutva, hard nationalism, woolly economics and hard-core populism could be a better description for brand AAP.

So, there is nothing shocking about what the AAP has done. The party seems to be following the textbook model of the Median Voter theory. In a market of votes, the political party that chases the opinions and preferences of the middling (“the median”) voter best is the winner. If the average voter’s mood shifts to the Right, the party must also shift that much to the Right. And vice versa. That is exactly what the AAP is doing in the most single-minded, undistracted, pursuit of votes. The Sangh Parivar has decisively shifted the mid-point of public opinion to the Right. The AAP is shuffling its feet quickly to align with this new mid-point of majoritarian nationalism. The shocking thing is that political analysts still get shocked by what this party does, still get rattled by yet another U-turn. Like beauty, betrayal also lies in the eyes of the beholder.

We should be grateful to Arvind Kejriwal for giving a fitting reply to his secular fans and setting to rest an avoidable excitement and dispute about the meaning of the AAP’s victory. He has also illuminated the distinction between political alternatives and alternative politics. It is too early to say if the political positioning he has unveiled would work for his party outside Delhi. But one thing is clear: it may be an ally for dislodging Modi, but not for reclaiming the republic.

Yogendra Yadav is the national president of Swaraj India. Views are personal.

Original Headline:  Don’t be shocked by Kejriwal anymore, his new game is to be ‘aam’ Bharatiya Janata Party