With Better Development Indicators, Spectre Of A Bangladeshi Cross-Over To India Is Ill-Founded

In an age of dog-whistle scaremongering, a Union minister alleged on February 9 that, “half of Bangladesh will come to India if citizenship is offered.” But no crystal ball prediction could be more deluded. This year Bangladesh’s economic growth rate has surpassed India. In the last decade, on a range of social development indicators, from infant mortality to immunisation, Bangladesh has fared better. Even on the cricket pitch, Bangladesh beat India at the junior world cup. So why would Bangladeshis en masse want to leave their cherished homeland? 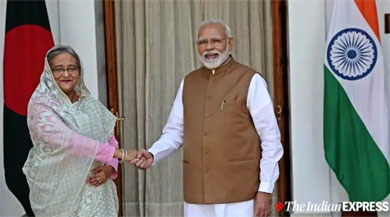 Undoubtedly, since economic liberalisation, Indians have grown much richer than Bangladeshis, but in terms of quality of life our neighbour largely outshines us. India trails across several (not all) composite indices from the latest Global Hunger Index to the Gender Development Index. Even on the 2019 World Happiness Index, Bangladeshis score better. While, technically, on the Human Development Index, Bangladesh scores marginally less, this is largely because the index merges income and non-income parameters.

My recent doctoral thesis sought to decode precisely this South Asian puzzle. How have India’s poorer neighbours forged ahead in social development? In the case of Bangladesh, the most prominent factor has been the country’s ability to dissolve inequalities through sustained investment in public services and the bridging of social and gender distances.

First, healthcare. Till the Eighties, Indians lived longer than most South Asians. But now, despite being poorer, an average Bangladeshi female child at birth can expect to live for four years more. Fewer Bangladeshi children also die before their fifth birthday. The formula for this success has been relatively simple. Since 2009, the government has constructed well-stocked “community clinics” in every third village. In addition, for four decades, committed cadres of government health workers have delivered medicines and family planning to women in the comfort of their homes.

Second, on the education front, even though India has a demographic dividend, Bangladesh has achieved a marginal advantage in youth literacy. Further, across income quintiles, Bangladeshi girls have higher educational attainments than boys. Most importantly, my doctoral survey in Panchagarh district found that Bangladeshi children had better reading skills than the Indian average as assessed by Pratham. Across 44 Bangladeshi schools, there were lower levels of teacher absenteeism. Further, the government provides free textbooks in the government, non-government (NGO) and madrassa-run schools promptly at the start of the academic year, without the chronic delays which plague India.

Economist Jean Drèze has aptly described India as amongst the world champions in social underspending. In contrast, Bangladesh despite being a poorer neighbour since the Nineties, has spent a greater proportion of government expenditure on education and healthcare. The fruits of these sustained investments have reaped rich dividends.

Third, on the nutrition front too, Bangladesh fares better. Thirtythree per cent of Bangladeshi children are underweight compared to India’s 36 per cent as per the demographic health surveys. Similarly, a greater proportion of Indian children are also stunted. Further, the inequality between wealth quintiles is more stark in India. A few years ago, the Bangladeshi government, with the help of NGOs, hired a unique cadre of “Pushti Apas” (nutrition sisters) who went door-to-door in their social endeavours. Unlike the Indian Poshan Abhiyan’s focus on vegetarian foods, they did not shy away from teaching mothers to feed growing infants a balanced diet with mashed fish, meat and eggs.

Fourth, even at the turn of the millennium, at least 80 per cent of Bangladeshi homes had toilets, even if rudimentary. By 2016, 96 per cent of households and 80 per cent of schools in my doctoral survey had proper sanitation. Apart from the typical Islamic emphasis on hygiene, local governments not only provide cement rings for free to poor families, but they also regularly spread messages through community group discussions, mosques, mass media and schools. Local entrepreneurs have also ensured that with the innovation of plastic pans, the cheapest toilets cost less than Chinese mobile phones.

That apart, Bangladeshi women are also increasingly assertive. The 2006 World Bank Survey on Gender Norms found a growing trend of “educational hypogamy”. In sharp contrast to India’s decline, Bangladeshi women also have higher labour force participation. Apart from the urban readymade garment sector, thousands of rural women work in agro-processing tea factories, jute mills, poultry and dairy industries. Every morning, streams of women in saris can be seen walking towards these factories with characteristic steel lunch Dabbas in their arms.

In comparison, India is grappling with the worst unemployment levels in 45 years and sinking economic growth rates. Government ministers should pull up their own socks, instead. Berating our neighbours with the false bogey of illegal immigrants, in light of the Citizenship Amendment Act, is nothing but an unjustifiable Islamophobic distraction. Instead, it would be far wiser for the Indian government to humbly learn the recipe of South Asian success to improve the lives of citizens from the impressive “Shonar Bangla”.