Sri Lanka’s born-again Prime Minister, Mahinda Rajapaksa, must feel he is among kindred spirits in Delhi. His hosts will have explained that while the English name, Palk Strait, divides the two countries, the Hindu Ram Setu unites them. One of many common elements in the two histories is that “one infamous photo tells a whole story” in both. Let Razeen Sally, a “half-half” (Sri Lankan Muslim father and Welsh mother) historian I knew in London and Singapore, tell the tale in his perceptive new book, Return to Sri Lanka: Travels in a Paradoxical Island, published by Juggernaut. 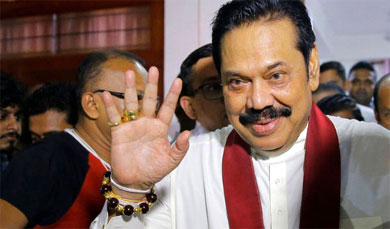 “On 23 July 1983, Velupillai Prabhakaran’s Liberation Tigers of Tamil Eelam... killed thirteen soldiers near Jaffna. Anti-Tamil riots erupted the following day when their mutilated bodies were brought to Colombo. Sinhala mobs looted and burned Tamil-owned shops. By the second day of rioting, the mobs were more organised and became homicidal. Throughout Colombo, Tamil shops, factories and houses were burned down; Tamils were dragged out of their houses and vehicles, beaten and often burned alive. Sinhala bystanders egged on the mobs; so did many Buddhist monks... The police and army looked the other way.” The “infamous” photo showed “a Sinhala mob singing and dancing round a naked, cowering Tamil youth, blood streaming down his lean body. Moments later, they beat him to death.” Nearly 3,000 Tamils were butchered, 1,75,000 displaced, more than half of Colombo’s Tamils left their homes, many never to return. Many joined the LTTE, others the Tamil diaspora which formed the “LTTE’s sinews of war, the source of its funding” for nearly three decades.

The elderly president, J.R. Jayewardene, kept silent for four days. “Finally, when he addressed the nation on TV, he seemed to side with the Sinhala mob; he did not express a word of regret for violence against Tamils. Worse, it emerged that at least one cabinet minister had instigated some of the mob violence, possibly with JR’s tacit consent.” Note the sequence. A dastardly crime against the majority by a “minority with a majority complex”, to quote a friend of Sally’s. Violent majority retaliation quickly followed by protracted vengeful slaughter with strong suggestions of official backing. The police and army do nothing. Finally, the political head of government implicitly supports the massacre of the minority. Sounds familiar?

If Jayewardene’s United National Party was “Uncle Nephew Party”, Sri Lanka is now a Rajapaksa fief. As president (2010-2015), Mahinda made younger brother, Gotabaya, defence secretary. When he became president, Gotabaya appointed Mahinda prime minister for the second time. Mahinda’s son is an MP. So are two of Mahinda’s brothers: one was Speaker, the other senior presidential adviser. A nephew was a provincial chief minister. The Rajapaksas claim the LTTE’s defeat as a personal victory. They personify majoritarian triumphalism to the envy of governments that must make concessions to pesky minorities. No such need for the Rajapaksas who dropped the Tamil version of the national anthem from this week’s Independence Day celebrations. The former president, Maithripala Sirisena, who took a “peace pledge” in 2016 and appointed a Tamil chief justice, had allowed the Tamil version instead of ramming a local equivalent of Vande Mataram down minority throats.

All this strengthens Bishop Heber’s impression of an island where “every prospect pleases,/ And only man is vile”. But not Siva, the “stridently anti-‘neoliberal’” anthropologist, who returned from abroad to work for an almost Gandhian self-sufficiency. Nor the elderly Father Jeyaceelan, who gave up teaching Greek and Shakespearean drama because ordinary folk matter more than elites. “We have to go back to square one with Sinhalese and Tamils getting to know each other and the religions opening up to each other,” he says. There’s also Chandra, former chairman of the Ceylon Chamber of Commerce, whose Friday Forum highlights issues like “government corruption and public sector mismanagement; the plight of poor, war-damaged civilians in the (Tamil-inhabited) north and east; the government’s oppression of the media, judiciary and other public institutions; its pandering of Sinhala Buddhist chauvinists, including troublemaking monks who used incendiary language and incited violence” while businessmen “brazenly kowowed to the Rajapaksas”, soliciting lucrative deals.

I must add Lakdasa De Mel, last Metropolitan of India, Pakistan, Burma and Ceylon, who threatened to add “excluding the Andaman and Nicobar Islands” to his title because as a Sri Lankan, he could not visit Port Blair. His protest cleared the way for foreigners. When I last met him, De Mel was Emeritus Bishop of Kurunegala in Sri Lanka and a dying man. He had interrupted Jayewardene’s flow of rhetoric at a private meeting with, “Junius dear boy, why don’t you retire? What have we got to give the world at our age except our death so that deserving young people can come up!” He angrily rejected my suggestion of treatment in England where he had studied and taken holy orders. “The doctors in this country were good enough to bring me into the world. I won’t insult them in my dying moments by saying they aren’t good enough to take me out of it.” My obituary editorial was called “Last Stop on the Metropolitan Line”, the reference to London’s Underground a private joke. “Come to dinner on the Metropolitan Line,” he would say in Calcutta, inviting me to Bishop’s House.

Another personal link. Sally mentions Sir Edward Barnes, the Ceylon governor who pioneered coffee plantation and road-building before becoming India’s commander-in-chief. When I wrote in this column about his great-granddaughter who was also Keshub Chunder Sen’s great-granddaughter and my aunt, a reader lived up to Oscar Wilde’s remark that only those who can’t get into society speak disrespectfully of it by sneering that she was only a box-wallah’s wife.

I remember Sri Lankan students in England in the 1950s as racially hierarchical. Although outsiders often saw little difference between them, and history records that adoptions, inter-marriage, Hindu-Buddhist eclecticism and cultural assimilation blurred ethnic identities, Sinhalese considered themselves superior to all Tamils. Colombo Tamils thought they were better than Jaffna Tamils. Both looked down on Indian Tamils. They especially despised Indian Tamil tea garden workers of whom there were 7,50,000 (14.5 per cent of the population) by 1931. Sally is astonished no one protested when they were disenfranchised in 1949. Or that Lal Bahadur Shastri’s 1964 pact with Sirimavo Bandaranaike promised “repatriation” when “most of these poor souls have never seen the Ceylon coastline, never mind their ancestral villages in Tamil Nadu”.

Sally’s sensitive probing of the island’s blood-spattered classical history and turbulent colonial politics interlaced with vivid accounts of recent travels and encounters establishes that while Sri Lanka is now technically at peace, dark forces prowl under the surface. Villages are quiet because, as a young Sinhalese says, “all the criminals are at the top of society, not at the bottom”. The Lessons Learnt and Reconciliation Commission hasn’t healed the wounds of centuries. The 1972 republican Constitution abolished the old minority safeguards, and Tamils feel victimized by a regime noted for “authoritarianism, Sinhala Buddhist chauvinism and ethnic strife, economic nationalism and dependence on China”. Muslim truculence culminating in the Easter Sunday bombings might even justify this unyielding attitude.

Mahinda Rajapaksa is the third high-ranking emissary since President Gotabaya made India his first overseas destination. The foreign minister, Dinesh Gunawardena, followed. These overtures are welcome. India’s stake in a peaceful, prosperous and stable Sri Lanka can’t be exaggerated but peace, prosperity and stability will prove elusive if Sri Lanka’s leaders continue the disastrous 26-year war by other means, moulding themselves on Duttagamani, the Sinhalese monarch (161-137 BCE) “who smote the Tamils hip and thigh, and did so, partly at least, with religious motives” (citing a 1960s history) and vanquished Elara, the Tamil king, in single combat. It’s tempting for India to make common cause with them against the omnibus enemy “terror” but that will only further intensify race tension.