Why Is PML-N Allowing Foreign Funding For Pakistani Madrasas? 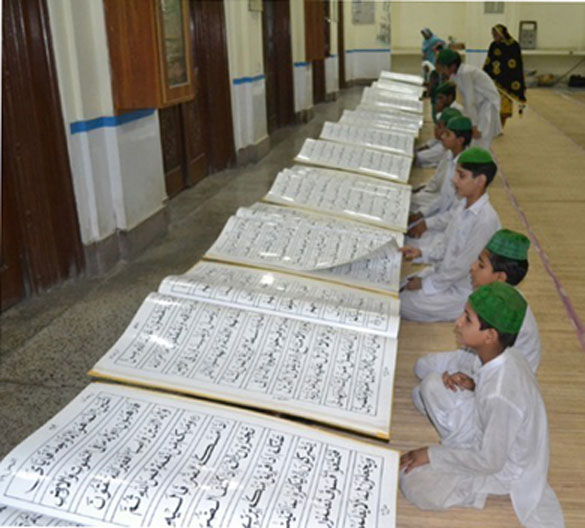 Students are abused and brutally beaten in madrassas and no one says anything because they are too scared. PHOTO: SHAHID BOKHARI/EXPRESS

Being the country’s largest province by population, the presence of a large number of religious seminaries in Punjab, both registered and unregistered, is natural. Eyebrows have always been raised when it comes to the influence of religious seminaries based in the province, but the source of funding received by these seminaries has always been dragged under the carpet. With the recent disclosure by Punjab Police, that is no longer the case. The fact that seminaries in Punjab receive funding from foreign countries is now out in the open.

Not surprisingly, the highest funding received is from the Middle East. Having ruled Punjab with an iron fist for what seems like an eternity, the Pakistan Muslim League-Nawaz’s (PML-N) close relations with the gulf world, especially Saudi Arabia, are well documented. It is not hard to deduce therefore, why the PML-N government would prefer keeping quiet on the matter than coming out in the open about it. Relations with the gulf world are pivotal to the PML-N government, both at the federal and provincial level. But with the cancer of religious extremism eating up Pakistan inside out, fuelled in large parts by the hate speech and literature spread by the seminaries in question, it is time for PML-N to re-evaluate its strong links to the gulf.

Saudi Arabia, for example, has funded religious extremism in various parts of the world, based in large parts on its paranoia of Shia Islam. While Saudi Arabia itself has not suffered from religious violence, even though it makes up for it with inhumane domestic policies, countries that have been on the receiving end of the funding  by Saudi Arabia and other Gulf countries have suffered massive human loss. Pakistan has the tragic honour of being an old member of that very club. Even though as far as this particular piece of news is concerned, Saudi Arabia falls well behind the likes of Qatar and Kuwait as far as the amount of funding goes, its influence in the region and its muscle behind the spread of Wahabi Islam has been obvious to the world for a long time.

While criticising the Gulf and other countries that have played an active part in the funding of these seminaries is normal, what also needs to be considered is the PML-N government’s lax attitude towards the whole matter. It would be naïve to suggest that a chief minister as active and agile as Shahbaz Sharif would not be aware of the source of funding for religious seminaries in Punjab. But the answer to why a blind-eye was turned to all of this is hardly complicated. The PML-N government has been extremely protective of Punjab as far as religious extremism goes. The fact that the province has suffered least as far as religion triggered violence is concerned is out there for everyone to see. The PML-N government was always hesitant to make a move against terror outfits because of the fear of backlash in Punjab. Add the fact that the PML-N government will do all it can to please its friends in the Gulf and it is easy to understand why putting a lid on matters, such as foreign funding, was such a convenient solution to it all.

Foreign policies do not change overnight. It takes a gradual process. Foreign policies as historically strong as the one between Pakistan and the Gulf world will take an even longer time. But it is about time that process starts.

Salman Zafar is a Cricket buff, retro music fan and an aspiring writer. He blogs at (theamazingyellowpig.blogspot.ca/) and tweets as @salmanzafar1985