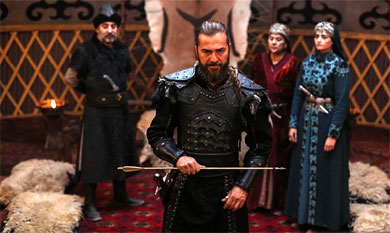 Ertugrul (Season 1) depicts the story of the Muslim Oghuz Turks against the Crusaders in the 12th Century and describes how the Muslim Resurrection took place, culminating in the establishment of the Ottoman Caliphate. The serial has Ertugrul as the main character and the plot revolves around him. One of the important aspects of the serial is that most of the characters are not fictional but are historical figures about whom historical sources have at least something to say. Ertugrul Ghazi was the son of Osman Ghazi, the founder of Ottoman Sultanate. Suleyman Shah, the head of the Kayi tribe and father of Ertugrul is a historical figure whose tomb, containing his relics, is in Syria and is the only property Turkey owns outside its territories. Similarly, Bamsi and Turgut, the two brave alps of Ertugrul are believed to have lived in 12th century Anatolia whose tales of courage and bravery have entered the Turkish folklore. The Templar Knights, wearing distinctive white mantles with a red cross, were a Catholic military order of the 12th century and were the most skilled fighting units of the Crusades. The serial has interwoven the historical characters with fiction in a stunning manner and has resulted in one of the most intriguing plots with full of adventure, love, hate, bravery and treachery. Though the serial has been dubbed in Urdu, it, however, lacks the vigour and enthusiasm of the characters and does not translate the emotions of the actors in actuality.

With the Kayi tribe as the main platform, the serial gives a glimpse of the tribal life and its various vicissitudes with survival. As the serial starts Kayis are in distress as the lands they have settled in do not provide enough means of survival. There is scarcity of water and the pasturage is not sufficient to feed their livestock-their principal source of wealth. Historically, nomadic tribes were in constant search for better pasturage and lands which led to inter-tribal conflicts and sometimes geographical boundaries were redrawn and empires were born. Indian subcontinent in the major chunk of its history was dominated and ruled by the tribal hordes who came in search for better opportunities. In case of the Kayis, their migration to Aleppo changed the boundaries not only of Middle-east but also of Europe. The serial glimpses the tribal culture in its multi-faceted moods-war, peace, happiness and sorrow. The tribal cuisine, eating habits (with everyone bringing his own spoon to feasts), dressing style (the headgear of every woman different), the modes of celebration and mourning have been depicted in their peculiar ways. Tribal notions of loyalty and utmost dedication to their chief in every situation are highlighted in the best possible manner.  The setting of the serial is amazing as nowhere during its entire course would a viewer doubt about its medieval linkages.

One of the important aspects of the serial is that the martial character of the Kayis has been depicted with its Islamic undertones. The characters are seen continuously engaged either in battles or preparing for the war. Though the tribal customs and traditions are important, it is Islam which reigns supreme and provides overall justification for the battles. Everything, from battles to peace overtures, from executing the traitors to honouring the heroes, is done to concord with the tribal customs and to please Allah. No wonder, the most repeated dictum is ‘battle belongs to us but victory belongs to Allah’. The depiction is presumably in consonance with contemporary Turkey where Erdogan is attempting a careful mixture of Turkish nationalism and Islam, given the fact that a large number of Turkish population watch television on which the serial was first broadcasted. This is where governments attempt to use history for the furtherance of nationalism.

The principal characters seem to frankly talk about their moral dilemmas and their resolution. The character of Ibn Arabi (though his actual association with the Oghuz has been doubted by the historians) reverberates every time a moral disjunction looks possible. Thus, when Ertugrul was disheartened at the prospective marriage of Halime Sultan, Ibn Arabi appeared to console him and remind him of his duty towards the larger cause. He nurtured the dream of a powerful Islamic State in Ertugrul and functions as his conscience keeper. But for him, Ertugrul would have died earlier on. Ibn Arabi’s zikr halqas and soulful duas not only keep the characters focussed but also add to the Islamic undertones of the serial. His character is also reminiscent of the powerful influence of Sufis in the medieval Islamic world and their role in transforming the lives of Muslims as well as non-Muslims, depicted here through the stories of SeljanHatun and Claudius.

Being set in the backdrop of the Crusades and the continuous fights between Muslims and Christians for the control of Jerusalem, the serial highlights the power and hypocrisy of the popes who while burdening the common masses with taxes, enjoyed wine and women. Their orientalist prejudices are evident in talking about Muslims in disparaging terms like goat herders and shepherds while also disapprovingly admitting their contribution in preserving the ancient Greek literature which was deliberately destroyed by the popes. The pathetic conditions of the Muslim rulers, their disunity which made them play into Templars’ hands and conspiracies and their luxurious lifestyles have been beautifully illustrated. El-Aziz, the ruler of Aleppo seemed to be more concerned about his poetry and love than the affairs of the State. The fact continuously stressed throughout the episodes is that the Muslim resurrection is possible only with the unity of Muslim rulers.

Every character has delved deep into his role and made stunning performances.  Ertugrul lacks oratory skills but is a brave and intelligent warrior whose deep love for Islam and a vision for the Muslim world makes him fit to be the lead protagonist. Bamsi loves his horse and swords and talks humour, the only character who makes the audience laugh. Turgut has amazingly performed his dual roles. When he is Yahuda, he means it and forgets that he is Turgut. Suleyman Shah wields his authority both through his sword and oratory skills. The story-telling skills of Del Demir are superb as he actualises the events and makes the audience feel them.  One of the satisfying aspects is that unlike Bollywood movies, the antagonists are smart, skilful and intelligent who outwit their opposites on a number of occasions and stand their ground till the end. Titus gives a tough time to Ertugrul and like him is very dedicated to his cause.

The serial has one of the most amazing plots and is rightly called as the Turkish Game of Thrones. There is a careful mixture of ambition and adventure, conflict and peace, love, hatred, conspiracy, dedication and faith. It succeeds in keeping the audience on the edge of their seats in each episode. Most importantly, it is full of suspense and it is almost impossible to anticipate the next move. In all the mayhem of conflict and conspiracies, the audience is kept well informed through powerful soliloquies which makes one fall in love or hate the characters. The powerful stories and anecdotes from Quran, Hadith and folklore throughout the serial add to the beauty of the plot.

The serial has successfully challenged the orientalist stereotyping of Muslim women and has given active role to them. They not only perform their role as mothers and wives but also as leaders of the tribe, occasional warriors and above all their gossips give direction to the plot. Mother Hayme, drawing anaology to Hazrat KhadijaRA not only encourages her husband in tough times but also has an opinion regarding everything which come out true as the serial moves on. SeljanHatun is an ambitious lady who has a purpose in seeing her husband become the Bey. She is determined to take revenge of her father’s killing and become the First Lady of the tribe. She does not hesitate in collaborating with Kortoglu, the traitor to fulfill her ambitions. However, when she repents she completely transforms herself and wins the hearts of the audience with her newly gained determination despite facing boycott from her family. Laila does not hesitate in moving out of the harem and help El-Aziz’s enemy despite facing threats to her life. Efftelya (Asma) is dedicated to her cause and outsmarts Ertugrul on many occasions. The serial has shown that Muslim women were not restricted to harem and influenced the decision-making process.

There are certain scenes which do not fit into the time frame of the serial. Though the love-story of Ertugrul and Halime Sultan has been added possibly to give audience some respite from the killings and conspiracies, it has gone too far. In the medieval Muslim tribal societies an open pre-marital love affair, with the love birds openly meeting and romancing was almost impossible. There are also some inconsistencies which could have been avoided. Though Ertugrul and others continuously talk of 2000 brave Alps, in reality even the entire population of the tribe seems not more than a few hundred. Apart from Ertugrul, Bamsi, Dogan, Turgut, Gondogdu and Hamza, no other Alp shows bravery and are easily run over by the opponents. Towards the last episodes the battle scenes turn somewhat dry as though the Templars are killed like flies their number only increases. While Titus escapes from the Castle alone and ambushes the Kayis, he is still able to gather his men out of nowhere. In a nutshell, the serial is amazing and is a must watch for those interested in history in general and the Muslim resurrection in particular.