27th of January Is Now Observed As ‘International Holocaust Remembrance Day’: This Year It Marked 75th Anniversary of Liberation of Auschwitz from Genocide

The 27th of January marked the 75th anniversary of the liberation of Auschwitz, a date that is now observed as ‘International Holocaust Remembrance Day’. Of the 5.5 million-6 million people killed in the Holocaust, about 9, 60,000 are believed to have died at the Auschwitz complex. As we reflect on the millions who were ‘exterminated’ (a term usually associated with pest control) it might be worth recalling how the Jewish people were first isolated and ostracised and then stripped of their humanity. 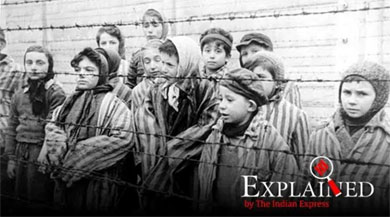 Historical records show that despite attempts by Nazi officials to obliterate prisoners, particularly those at Auschwitz, there were survivors who lived to provide testimony against Nazi officials. (Source: Wikimedia)

The ‘Final Solution’ claimed, by 1945, two thirds of Europe’s Jewish population. However, as most historians agree, it is important to note that there was probably no single decision taken by the Nazis to rid Europe of its Jewish population; instead, the ‘Final Solution’ was enabled by a series of incremental policies and pronouncements by the regime. If the horror of the emerging policies was apparent to those within and outside the country, it seems they chose to look away.

The first stage was the identification and registration of all Jews, which then enabled the confiscation of their property, followed by the passage of laws to circumscribe their citizenship, means of livelihood and access to legal remedies. The state-sponsored intimidation, impoverishment and alienation succeeded in driving out about 37,000 Jewish people in 1933 alone. Later, the Nuremberg Laws of 1935 defined ‘Jewishness’ and ‘German citizenship’. The first of the two laws clarified who was ‘Jewish’ and forbade intermarriage between Germans and Jewish people, in addition to disallowing the employment of German women under the age of 45 in Jewish households. German citizenship was defined by blood, and continually reaffirmed through ‘conduct’. Together, these laws completed the segregation and stigmatisation of an entire community. This culminated in Kristallnacht, the Night of Broken Glass, in November 1938, when Nazi paramilitaries and civilians attacked Jewish homes, hospitals and synagogues, while German authorities looked on.

Those that did not or could not emigrate were driven into ghettoes following the Nazi invasion of Poland in 1939. The ghettoes allowed Nazi functionaries to efficiently round up whole families for concentration camps by 1941. All the while, the demonisation of Jews ensured that they began to be considered ‘subhuman’, a phrase used by Field Marshal Walter von Reichenau in 1941 in his now infamous ‘Severity Order’. Thus, having stripped them of their humanity, the regime moved with clinical efficiency to annihilate the Jewish people. Reichenau’s carefully phrased term “severe but just retribution” was code for killing, and similar versions were circulated amongst different commands. This led to one of the most brutal phases in the Holocaust whereby Einsatzgruppen, or Nazi death squads, in collaboration with the Wehrmacht and local auxiliary units in German-occupied territories in Poland and the Soviet Union rounded up and shot 1.3 million Jews. Initially, the squads gathered Jewish men and boys, along with members of the intelligentsia and political opponents (not all of whom were Jews). They were then executed on various trumped-up charges. Over time, the fig leaf of cause was discarded; simultaneously, the net was widened to include women and girls.

Compounding the tragedy was the fact that the Einsatzgruppen were assisted by locals, often in a ratio of 10 locals to 1 paramilitary. The invading Germans were also successful in instigating locals to riot against Jewish people as they marched into newly captured territories; in the six months following the invasion of the Soviet Union in June 1941, over 60 pogroms in Latvia, Lithuania and Ukraine claimed about 24,000 Jewish lives. However, the shootings were proving inefficient and costly. When the ‘Final Solution’ was agreed to in January 1942, the numbers were too great and army commanders were complaining that the shootings were affecting soldiers’ morale.

And so, the logical next step was to industrialise the killings, using the gas chambers. Historians estimate that of the 1.3 million who were sent to Auschwitz, 1.1 million died — most killed by gassing, the rest felled by disease, exhaustion or starvation. Those to be ‘exterminated’ were led to chambers, made to undress and sent into what looked like a shower room; once they were inside, the chamber was sealed and the cyanide released into it. Death occurred after some minutes of terror. The corpses were then harvested: the women’s hair was cut, and dentists removed gold fillings from the teeth of the dead. By 1944, 10 kg-12 kg of gold was being harvested each month. The dehumanisation of the exterminated was complete.

This is how death when dehumanised looks. It sullies us all. May we never forget.

Original Headline: The road to genocide