Al Qaeda Has Announced The Creation Of A South Asian Branch, Dubbed Al Qaeda In The Indian Subcontinent: The Question Is Why Now?

Other Related Articles on this Page:

US Had Warned Delhi Of Qaeda's Designs In August

Al Qaeda has announced the creation of a South Asian branch, dubbed al Qaeda in the Indian Subcontinent (AQIS). The question is why now?

Al Qaeda has threatened India before. “Such statements have been coming regularly since Osama Bin Laden’s 1996 call to jihad,” says Ajai Sahni of the South Asian Terrorism Portal, “when he named India and, specifically Jammu and Kashmir and Assam.” He notes that after the 2002 communal riots in Gujarat this was added to various al Qaeda statements as well.

In the past, what has been noticeable is how unsuccessful al Qaeda has been in operating in India.

US President George W Bush was known to hold up Indian Muslims in private conversation because of their refusal to heed Bin Laden’s deadly siren call. However, a Qaeda had other reasons to avoid India.

One, after a spectacular attack like 9/11, attacking a soft target like India was not seen as an image-enhancing exercise. Two, there was evidence that Pakistan resisted Al Qaeda efforts to operate in India, preferring to let that be the domain of its chosen terrorist groups.

Zawahiri’s announcement is seen as a consequence of a number of varied developments.

One, Indian Muslim have become more radicalised in the past few decades and this may have encouraged Zawahiri to woo South Asians. “What Bush said was true in the 1990s,” said an ex-intelligence bureau official. Events in India like the 2002 riots and developments in West Asia, like the invasion of Iraq, have pushed a small number into adopting militant pan-Islamicism.

Small groups have been going to Pakistan and Afghanistan the past few years. Indian intelligence knows of nearly 20 Indian Muslims who joined or tried to join the ranks of the Islamic State, despite its virulent hatred of Shias. “As many as 80 to 90 Indian Muslims may have joined al Qaeda, IS and similar groups,” he said. This would have almost certainly been noticed by Zawahiri.

Two, Zawahiri desperately needs to revive al Qaeda which is being eclipsed by the Islamic State and other militant groups.

Al Qaeda has barely been operational for the past few years, battered by the death of Bin Laden and US drone attacks that have wiped out many of its senior commanders.

Zawahiri has been critical of the Islamic State’s anti-Shia stance – it is one of the reasons that the Islamic State ended its allegiance to al Qaeda. Worse, many of the al Qaeda affiliations in Afghanistan, the Arab world and West Africa have switched their loyalties from Zawahiri to the Islamic State.

As his star is declining in the Arab world, Zawahiri may have sought to compensate in South Asia. Muslim unease over Narendra Modi’s election, the repression of the Rohingyas in Myanmar and any number of events in Pakistan may have seemed like fertile ground for recruitment and activity.

Three, AQIS may represent a logical culmination of another trend: the growing interest of the Tehreek e Taliban in global jihad. 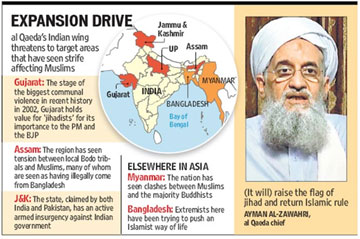 Zawahiri says that putting together AQIS “has taken over two years”, a date before the rise of the Islamic State

Strikingly he has appointed Maulana Asim Umar as its head is telling. Umar is a former commander of the Tehreek e Taliban Pakistan and called for Indian Muslims to join the global jihad in a video in 2013 titled “Why is there no storm in your ocean?”

Umar boasts about how Tehreek fighters are fighting in Syria and Iraq. Western intelligence has confirmed that Tehreek has an active base in Syria.

“Al Qaeda has been trying to attract elements from various groups – Jaish e Mohammad, Lashkar and so on – into direct alliances,” says Sahni.

To do so, however, Zawahiri would have to focus more on India and the subcontinent.

Sahni is confident that al Qaeda at present does not have a functional network in India at present.

“This threat however should not be taken lightly,” says Rana Banerjee, former number two of the Research and Analysis Wing.

US Had Warned Delhi Of Qaeda's Designs In August

The United States alerted India about al Qaeda’s plans to expand operations into the Indian sub-continent in late August, sources said on Thursday, as part of the two countries’ close intelligence cooperation that is set to become stronger during Prime Minister Narendra Modi’s visit to Washington later this month.

Government sources told HT that al Qaeda chief Ayman al Zawahiri’s video statement did not come as a surprise to Indian agencies, which see it as a response to the growing clout of ISIS among Islamic radicals.

“Zawahiri’s statement of launching al Qaeda in the Indian sub-continent is a desperate attempt to stop the radicals from gravitating towards the so-called caliphate declared by ISIS’ Abu Bakr al-Baghdadi,” said a top Indian counter-terror operative.

“This is not only competitive jihad but also an attempt by al Qaeda to recapture lost ground among Sunni Muslim radicals. It is a matter of serious concern to India as the new branch will launch terror attacks as spectacular and gruesome as ISIS’ beheading tapes.”

“Zawahiri fell out with al-Baghdadi over the question of support to the al Nusra group in Syria in 2011.

While the US tip-off to the Research and Analysis Wing (RA&W) gave Indian agencies extra time to prepare for the new al Qaeda branch, South Block is seriously looking at setting up a joint group on countering violent extremism (CVE) so that critical information on radical Salafi groups could be shared in real time.

“The purpose of CVE interaction is to study the way US is preparing legislative framework against Muslim youth joining global jihad with ISIS in Iraq and see whether a similar variation can be applied in India,” said an intelligence official.

Counter-terrorism officials expect Zawahiri will use the al Qaeda-affiliated, Af-Pak-based Ansar ul Tauhid group for attacks in the sub-continent, particularly as its members were earlier with the Indian Mujahideen.

Ansar ul Tauhid was set up after Indian radicals from Azamgarh and Bhatkal broke away from IM founders Riyaz and Iqbal Bhatkal, due to interference from Pakistan’s ISI in selecting Indian targets, and joined al Qaeda.

The head of the newly-created South Asia branch of al Qaeda, Asim Umar, is a Pakistani ideologue who has produced a number of online calls to jihad but has a relatively low profile.

Umar -- an alias -- was named by al Qaeda chief Ayman al-Zawahiri in a video message as the leader of the network's new operation which will try to rouse fighters in India, Bangladesh and Myanmar.

He appears wearing a black turban and beard in several online videos produced by al Qaeda and the Tehreek-e-Taliban Pakistan (TTP), the loose coalition of home-grown Islamist militants that have waged a bloody campaign against the Pakistani state since 2007.

An Afghan Taliban source said Umar worked with the Punjabi Taliban, the TTP chapter in Pakistan's most populous province, for some years before linking up with al Qaeda.

"He is basically a propagandist and started his article writing after translating some Jihadi material from Pashto language to Urdu," the source told AFP.

Pashto is the language of the Pashtun ethnic group of Pakistan and Afghanistan from which the Taliban traditionally draws many of its fighters.

Amir Rana, a Pakistani expert on militancy, described Umar as an "intellectual asset" of both al Qaeda and the TTP but said there was so far no evidence linking him to an operational role as a commander.

Umar, who appears to be middle-aged, does not look Pashtun and most of his online postings are in Urdu, the national language of Pakistan which is closely related to Hindi spoken in northern India.

Analysts say the new al Qaeda branch faces a struggle to gain traction in India and Bangladesh, which have large but traditionally moderate Muslim populations.

There is some acknowledgement of this in a video featuring Umar put online by al Qaeda last year, titled "Why is there no Storm in your Ocean?".

In it Umar, speaking Urdu, urges Indian Muslims to rise up and fight to establish a caliphate.

The speech is peppered with references to the Islamic Mughal Empire which ruled much of what is now India for centuries, urging Indian Muslims to "restore" Islamic rule across the subcontinent.

"Why is it that the Muslims of India are totally absent from the fields of jihad?" he says.

"Rise! Awaken! Participate in this global jihad to give a final push to the collapsing edifice of America."

The speech also contains a relatively moderate note -- he tells would-be jihadists not to force anyone to convert to Islam.

This stands in sharp contrast to the hard-line stance taken by members of the Islamic State jihadist group fighting in Iraq and Syria who compelled some minorities to convert.

An intelligence official said Umar had recently visited Syria, though it was not possible to confirm this.

At least 23 youth from Manipur’s Lilong area of Thoubal district are reported to have left home to join the Indian arm of the al Qaeda in the recent months.

“They had gone in two batches. Four have returned home while the others are untraceable,” a top government security official told HT on condition of anonymity.

The official said these recruits were first indoctrinated and trained in weapons before being placed in the actual war theatres in Afghanistan and Iraq.

Significantly, while announcing in a video message on Thursday morning the formation of a new al Qaeda outfit in India, al Qaeda chief Ayman al-Zawahri mentions Burma, Bangladesh and Assam as some of the key areas of operation of the new group.

Sources also told HT that a faction of Indian Mujahideen (IM) under Mirza Shadaab Beig that was based in Afghanistan, may have formally joined the global terror outfit which includes new recruits from India.

“Al Qaeda’s new wing could be a combination of the IM faction with Beig, Bada Sajid and Mir Sajid as its key members, some veteran al Qaeda members like Maulana Asim Umar (the group’s new chief) and Usama Mahmoud (the group’s spokesman), and new recruits from India,” a top government security official told HT on condition of anonymity.

The IM is on the back foot in India with a number of big arrests in less than a year which has been attributed to the unprecedented and proactive collaboration between the Intelligence Bureau and the Research and Analysis Wing.