2.    Yemen's children are the main victims of the Shia-Sunni conflict.

3.    Yemen has become a living hell for children. 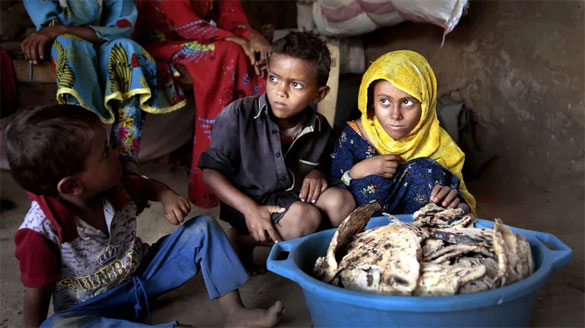 Children sit in front of a tub of moldy bread in their shelter in Aslam, Hajjah, Yemen, last month. The U.N. has estimated that up to 14 million Yemenis — about half the country's population — will suffer severe food shortages in the next few months./Hani Mohammed/AP

The Arab Spring was started by the people of the Middle East with the hope of making the region a paradise but in reality, the region has turned into a hell. The civil war that started in 2011, devastated Egypt, Libya, Bahrain, Syria and Yemen. Only Tunisia survived the uprising. Syria and Yemen are still in the midst of an internal war and as a result, the two countries have been badly destroyed and the people of the two countries have been going through indescribable hardships.

Yemen, which is the poorest nation in the region, has born the brunt of the civil war the most. The military conflict in Yemen started in 2015 when its pro-Arab president Mansour Hadi fled to Saudi Arabia after the Shia militant group the Houthis captured the capital of Sanaa and other major cities of Yemen.

Saudi Arabia feared that a Shia government led by the Houthis in its neighbourhood Yemen will be a threat to it in the same way as Russia thought a NATO ally Ukraine will be a threat to it. Since Houthis have the backing of Iran, Saudi Arabia, UAE and other allies started a military campaign against the Houthis to oust them from power. The US, the UK and, France have provided Saudi-led coalition logistic support. The US and UK have been behind every conflict in the world.

The conflict between Houthis and the Yemeni government was their internal issue but the US and UK egged on Saudi Arabia to launch a military campaign against the Houthis, showing them the fear of Iran who has been providing support to the Houthis. During the last seven years both the sides have attacked each other causing economic loss and infrastructure damage to both.

Since, Yemen is a poor country, it has suffered enormously. Its infrastructure has been damaged. Its health care system has collapsed. Its education system has gone out of gear. The majority of the population is leading a miserable life.

The most shocking part of the Yemen crisis is that millions of children are starving. During the last seven years, more than ten thousand children have died or have been maimed due to the war. The crisis is so grave that the Executive Director of UNICEF, Catherine Russell had to say that Yemen is a living hell for children. She also described the Yemen crisis one of the world's largest humanitarian crisis.

Though the Arab countries are oil rich, they have not made individual or collective initiatives to help the Yemeni children or people. The UNICEF is doing what it could to provide food, health care, safe water, formal education and more importantly cash transfers to Yemeni families. Sime of the initiatives, the UNICEF has taken to help the Yemeni children are as under:

1) It has provided safe drinking water to 8.8 million people including 5.3 million children.

3) It facilitates cash transfers to 1.4 million families ever quarter.

4 )It is helping more than half a million children get formal education.

The World Food Programme is also providing food assistance to the people of Yemen.

Contagious diseases like Cholera breaks out often in Yemen claiming hundreds of lives including children.

Some international NGOs have done their best to help the people of Yemen with food, emergency shelter, medicine and safe water.

Islamic Relief USA claims they have helped one million people in Yemen. They have thousands of field staff in Yemen.

These small groups with limited resources cannot help the people at the highest level as the people need help and assistance of billions of dollars. The UN failed to raise enough money to prevent further catastrophe. Only 1.3 billion dollars could be raised where 4.3 billion dollars ae needed.

The crisis will only aggravate in coming days due to the global price rise. The Ukraine war will also add to the problems of Yemen because wheat and other essential commodities are imported from Ukraine.

But unfortunately, there is no collective programme of the Muslim countries for saving the starving children and adults of Yemen. Saudi Arabia, Iran. US, UK and France are concerned about their political and ideological interests. No one cares for the people and children of Yemen. Since, the war in Yemen seems to go on indefinitely, there seems no end to the miseries of the children of Yemen.

The Shia-Sunni conflict in the Middle East has caused irreparable damage to the Muslim world. During the last 11 years since the Arab Spring, millions of the people of Syria, Iraq and Libya have been internally or externally displaced. Millions of children have been rendered homeless and are malnourished. Many have had to flee their country to seek asylum in Europe. But the conflict in the Muslim world sees no end. The main victims of these conflicts are children and the Muslim countries have no programme to help these children. The parents in Yemen are not sure if their children will live the next day. Its time the OIC, took the issue of the children of Yemen seriously and initiated humanitarian work to save the children of Yemen and to end the conflict.