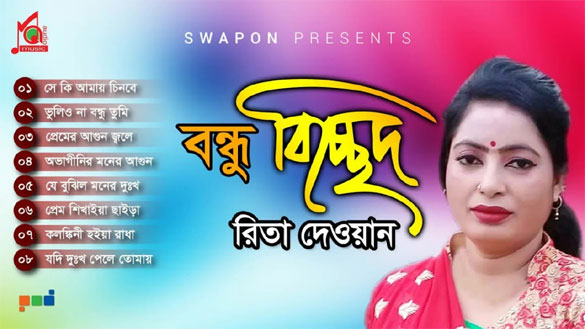 A female Baul singer of Bangladesh Rita Dewan is facing death threats ever since she made blasphemous remarks against Allah during a mystic song duel in November last year.

She made remarks against Allah that Muslims consider blasphemous during a paala gaan ( a singing duel) in which she and her rival singer played Man and God. The gist of what she said during the song is as follows:

"Allah says in the Quran that He is nirakar (formless) but again He says that if man walks towards Him one feet, He walks towards him 10 feet. It means He has feet. So if he has feet, He obviously has hands, and stomach and back too. Again He says that on the Day of Judgment, He will sit on the throne and deliver justice to the mankind. This means He possesses eyes and ears and mouth." She further defends Prophet Adam by saying that Allah says that not even a leaf can move without His permission. Then how could Adam make the mistake without His knowledge and permission? Allah entered into Adam's body and tempted him to eat the prohibited fruit. Adam did not ask Allah to enter into his body. That means Allah is the real Satan. It was Allah's mischief."

If one listens to the whole video available on youtube, one can't help laughing at her naivete. She attempts to discuss a complex topic without proper knowledge and makes her points with childish innocence and conviction. And while making her remarks against Allah, she asks the audience, Bolo Kharap laagchhe ki? (Do you feel offended?) And the audience replies, No,no, no.

The video of the song went viral on youtube and evoked protests from Muslims. Many religious figures demanded harsh punishment for her. Some imams of mosques issued fatwas permitting her killing.

Russel Mian said that he was aggrieved at the fact that the court had not acted in right earnest and had taken time to begin hearing in the case. He had expected that the court would hear the case within seconds but it has taken days. He also said that in this case which was filed to protect the honour of God, he had also expected that no one would oppose and criticise him but it was unfortunate that many Muslims criticised me and said that I should not have filed the case. They say that Rita Dewan should be forgiven. But I dont care for the criticism because I am on the right path. Earlier I suffered from back pain and whenever I would ride my bike my waist would ache. But since the day I filed the case, my back pain has gone mysteriously. I demand that Rita Dewan should get punishment."

On October 5, the Police Bureau of Investigation submitted its report to the court and Rita Dewan made her first appearance in the court on November 15.

But for 8 months she could not participate in any concert. She generally attended concerts in sufi shrines and had a large fan following but after the cases were filed against her and death threats were issued by mullahs, she went into hiding and spent almost the entire year in hiding in shanties in rural areas. She missed more than 60 concerts and has been living in fear of being murdered.

The most important point is that she apologised for her remarks in January itself. Still in February cases were filed against her seeking her blood. Mullahs issued death fatwas against her even after she apologised.

According to the law, if proven guilty, she could be jailed for 7 years or fined Taka 10 lakh.

In January, another Baul singer Shariat Bayati was arrested on charges of blasphemy and hurting the religious sentiments of the Muslims. He got out after spending six months in jail and is now facing death threats.

In recent years about two dozen sufis have been killed in Bangladesh. The conservative religious section of Bangladesh consider sufism against the teachings of Islam. Bauls who have their own philosophy are also branded anti-Islam and are harassed and tortured.

As the case against Rita Dewan continues, the vilification campaign against her also continues. Even if she is absolved of the charges, the religious section may not forgive her despite the fact that she has already apologised. Though recently she started participating in concerts, she is very scared. During her recent performance, she spotted two men in the crowd with a harmful intent. But they left after two songs.

Cultural activist of Bangladesh Rezaul Karim is of the view that the cases against Rita Dewan were a part of a pattern to censor artistic expression."