Imran Khan, Can He Be an Exemplary Prime Minister?

The Fitna was started by Maulana Maududi; had it not been for him, Ziaul Haq and Bhutto, the Pakistanis would not have been belligerent towards fellow Pakistanis 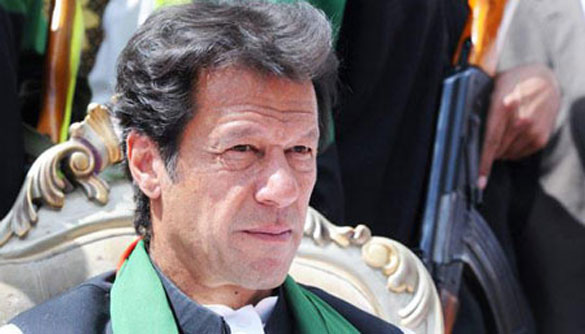 Imran Khan is by far the least-worst candidate among the field of candidates for Pakistan. Indeed, he can be an exemplary candidate if he fixes some of the flaws of sectarianism blatantly expressed by him. Khan’s statement that he has not asked the Ahmadiyya Muslims to vote for him is disturbing. Shouldn’t the future head of Pakistan’s government care about “all” Pakistanis? Does he not want to represent them? He sounded precisely like the Romney guy, thank God for saving America from him (Disclosure: I am a Republican, and he lost because not all Republicans voted for him). I see those reflections in Khan; he is playing like Romney in the last few weeks of the campaign, appeasing the right wing.

The second statement was made in Urdu, reaffirming that the Ahmadiyya are not Muslims because they do not subscribe to the Khatimun Nabiyeen, the finality of Prophet Muhammad (PBUH) as the last prophet, as if he exclusively represents the Sunni Muslims and the hell with the others. Is this acceptable? As a leader of the nation he represents everyone, whether they believe in the Prophet (PBUH) or not. Prophet Muhammad (PBUH) himself set the example of respecting Jews, Christians and others who did not believe in him, and not only that, he signed the treaty with them to co-exist and co-govern their own affairs per their own laws.

If Khan is like one of those other bad guys, that would be different; but he is a decent man and probably the only hope for Pakistan. He has earned that by being honest and a non-appeaser. Now worried about winning, he has started appeasing the mullahs, and speaking the language of the Jhangvi idiots who want to declare Pakistan as a Sunni nation; the next would be Ahle-Sunnat, and then those among Ahle-Sunnat whose pants length is precise to the millimetre. There is no end to appeasing or calming down the fanatics, and they would extract a pound of flesh from him.

The question is why Khan should worry about the insignificant Ahmadiyya, Shia or Hindu minority. Is that the right thing to do? Did Prophet Muhammad (PBUH) not speak out for the oppressed? Here are some civil examples, and I hope at least the Pakistani Americans would understand and support it.

1. Civil rights acts were passed to right the wrong done to the African Americans, a tiny minority. It was passed by the white majority; it was for the common good and justice, that all men are equal. Shouldn’t Islamic Republic of Pakistan adopt this? Isn’t that an Islamic value?

2. Lincoln’s abolishment of slavery for Africans was passed by the white majority, indeed the only voters in senate then were white.

3. Barack Obama took the risk to stand up with the LGBT community where as everyone thought it was the death nail for him politically; even Muslims gave him over 80 percent of their vote, despite his support for the same sex marriage.

4. Humanity in general and Muslims in particular are guided to stand up for justice. Only the civility of majority can change things. Minorities do not have a voice in Pakistan and they live on with apprehensions. The Hindu parents worry when their daughter will be abducted and forced to convert or when the Ahmadiyya girl student will be kicked out of school or their graves are desecrated, Shias ordered out of the bus and shot point blank and Christians will be framed with blasphemy charges. Societies are judged by how they treat their minorities, women and children. Good Pakistanis are letting bad things happen in their names.

5. It is the Muslim thing to stand up against oppression.

6. ‘Baad may karliengaye’ (we will do it later), after election, is a lie. It will never happen. The foundation of Khan’s campaign should be based on integrity. As 96 percent of Pakistanis prefer freedom of faith as per the new Pew survey about Muslim attitudes towards the Sharia. Who is he representing then?

In all the cases above, there was an assumption that the majority does not favour it. Just like the statements from a few Pakistanis that Ahmadiyya should not call themselves Muslims. It is a Pakistani thing and not a Muslim thing.

Perhaps the issue started with the dictator brainwashing the vocal Pakistani public, because before that people minded their own business. The Fitna was started by Maulana Maududi; had it not been for him, Ziaul Haq and Bhutto, the Pakistanis would not have been belligerent towards fellow Pakistanis. Had that evil draconian anti-Islamic Hudood laws was not shoved on to Pakistanis, they would be standing up for the rights of all Pakistanis. Dictator’s Hudood laws have become Allah’s laws now, what an Irony. The germs have infected Bangladesh and Indonesia, and now affecting a few Indian Muslims as well.

Muslims around the world have little prejudice towards the Ahmadiyya. I meet large groups of Muslim scholars, imams and ministers from Muslim nations twice a year for coaching in pluralism. They do not have the bias that a few Pakistanis vocalise. I firmly believe if there is referendum, where individuals will not be identified, the Pakistani public will overwhelmingly want to get rid of the Hudood laws and the harassment of the Ahmadiyya Muslims.

A few, just a few will say why on earth is Khan supporting the Ahmadiyya? My answer is simple: it is not support for the Ahmadiyya, but rather an effort to preserve the character of Muslims and Islam, which is to stand up for Justice. I have nothing to gain but hear ugly words from a few. I am better off spending my time making money, aren’t I? Doesn’t that make me run from the responsibility of doing my personal share of work towards a better world? The Prophet (PBUH) said that the least you can do is to speak up, didn’t he?

The issue is really not about Khatimun Nabiyeen, but do we as Muslims believe that Islam allows us to mistreat those who are not Sunnis? Khan should have said the Ahmadiyya (not Qadianis, which is like the N word to them) are Pakistanis, and they have every right to vote, instead of reiterating that they are not Muslims, and that as a possible head of the government I represent them and to represent them, I would ask for their vote.

Democracy is not an easy system, it asks a lot from everyone. It is testing one’s ability to hear different opinions without feeling hatred for the others. Most Muslims have democracy in their hearts and souls; many more are yet to get it. Thank God, I was a minority in India, and a minority in the US. The majoritarian arrogance is not by the majority, but by a few among them, who assume a blanket authorisation by the silence of the real majority. It is time for the majority to speak up and get Imran Khan to represent every Pakistani without discrimination. If not he is just another politician claiming to follow the Prophet (PBUH), but he is not.

Mike Ghouse is a speaker, thinker and a writer on pluralism, politics, peace, Islam, Israel, India, interfaith, and cohesion at work place. He is committed to building a Cohesive America and offers pluralistic solutions on issues of the day at www.TheGhousediary.com.