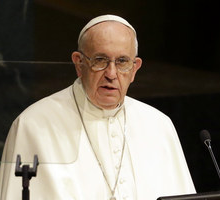 Washington — AFTER attending a canonization Mass at Catholic University with the pope who rails against the excesses of capitalism, I walked off campus to a festival of capitalism.

Excited by seeing the humble black Fiat in person and infused with Papa’s warning against the numbing effects of the “culture of prosperity,” I resisted all sales pitches. Until I got to the last guy.

He was selling blue-and-white T-shirts for $10 with the declaration “Coolest Pope Ever.”

Francis is undeniably cool. He once worked as a nightclub bouncer in Buenos Aires. He got a serenade to “Frank, baby,” from his fan Stephen Colbert. He spurred nuns to have a tailgating party at Catholic U. before his Mass, inspired the Internet to erupt in photos of dogs sporting miters and persuaded a blubbering John Boehner that he would never have a day that good again.

Though Friday was dry, Francis got a rainbow before his triumphant tour of Central Park. And he felicitously leaves the country before the super blood moon Monday morning — considered by some Christians to be a sign of the apocalypse.

Cleaving closer to the teachings of Jesus, a carpenter from Nazareth, Francis rejected the fancy red slippers of predecessors in favor of plain black shoes. He scorned the papal palace for a suite in the Vatican guesthouse. He ended the fixation on divisive social issues and refocused the church on healing social justice and the Golden Rule.

On Friday, Rolling Stone premiered a single called “Wake Up! Go! Go! Forward!,” from the coming pop-rock album Francis is dropping in November, sort of a “Shake It Off” for apathy and selfishness.

Yet his very coolness is what makes his reign so hazardous. Watching the rapturous crowds and gushing TV anchors on his American odyssey, we see “the Francis Effect.” His magnetic, magnanimous personality is making the church, so stained by the vile sex abuse scandal, more attractive to people — even though the Vatican stubbornly clings to its archaic practice of treating women as a lower caste.

Pope Francis would be the perfect pontiff — if he lived in the 19th century. But how, in 2015, can he continue to condone the idea that women should have no voice in church decisions?

In a scandal that cascaded for decades with abuses and cover-ups, the church was revealed to be monstrously warped in its attitudes about sex and its sense of right and wrong.

Yet shortly after he was elected, Francis flatly rejected the idea that the institution could benefit from opening itself to the hearts and minds of women. Asked about the issue of female priests, he replied, “The church has spoken and says no,” adding, “That door is closed.”

Francis preaches against the elites while keeping the church an elite boys’ club.

As he arrived to say Mass on an altar designed by students outside the National Shrine of the Immaculate Conception, the pope was surrounded by hundreds of white-robed male bishops, male priests and a sea of seminarians as he nonsensically canonized Father Junípero Serra, a missionary agent for the Spanish empire in California, a man who flogged Native Americans who broke the rules of Catholic teachings.

The Holy Father has acknowledged that “Mary is more important than the apostles.” He also disingenuously called women in the church “more important than bishops and priests” and patronizingly told a group of female theologians last year that they were “strawberries on the cake.”

As The Wall Street Journal recalled Friday, in 2013 he told a group of several hundred nuns that they must be spiritual “mothers” instead of “spinsters,” and he compared a torpid Europe to a grandmother who is “no longer fertile and vibrant.”

He did make an important gesture last month when he said that in the jubilee Year of Mercy, starting in December, priests could absolve women who had had an abortion.

And blessedly, he’s made the Vatican end its two inquisitions into American nuns. But stopping the torment of innocent nuns does not constitute much of a nod to modernity. The church is in arrested development.

Paul Vallely, the author of a respected biography, “Pope Francis: Struggle for the Soul of Catholicism,” calls women the pontiff’s “area of greatest weakness.”

“He understands there is a problem with the role of women in the church and talks frequently about the need for a ‘new profound theology of women,’ but he has no idea how to implement this,” Vallely told me. “In practice, he is a man of a certain age from a macho, Latin American cultural background who has limited understanding of the women in the modern world, despite the fact that he has had a number of close women friends.

“I have spoken to a couple of them and they have discussed these issues with him, so he is not unaware of them. But he seems to have no idea of how to make a solution to work within the orthodox framework of Catholicism.”

Vallely praised the pope’s message in America as “masterful,” noting he softly but firmly reprimanded the U.S. bishops for hectoring on the culture wars and kept up his “uncompromising” stance on climate change. “Throughout, he challenged without wagging his finger” on social inequality, poverty, welcoming migrants and immigrants, and ending the death penalty — as though he was conscious of “being a guest in someone else’s home.”

But the biographer said that, for him, Francis’ “slow progress on sex abuse” and his lack of forward motion on women are “his huge areas of weakness.”

As the noted religion writer Kenneth Briggs told me: “People here are ardently projecting a lot of things onto this pope, including a liberal new day for the church. But there hasn’t been any change in the moral teachings. It’s to Francis’ credit, I guess, that he gets credit for things he hasn’t done.”

In his speech to Congress, Pope Francis praised Dorothy Day, a social activist who talked about having an abortion, putting her in the company of Lincoln and Martin Luther King Jr. At the United Nations, Malala Yousafzai looked on approvingly as he spoke about the right of all girls to have an education. And at St. Patrick’s on Thursday night, he thrilled the American nuns present when he thanked them, asking, “What would the church be without you?” and saying, “I love you very much.”

But even as he was spreading the love to nuns, a priest in San Francisco, Father Jack McClure, was being sanctioned for appearing at a conference on women’s ordination in Philadelphia last weekend — a conference he said he attended in the spirit of the pope’s call for dialogue.

According to The National Catholic Reporter, Father McClure got a message from his archbishop in San Francisco, the archconservative Salvatore Cordileone — who supported a pastor who banned altar girls this year — that he could no longer celebrate Mass, starting in October.

“I feel the pain of being silenced,” the priest told the Catholic paper, “and in this silencing, I am beginning to feel the deep pain women feel all over the church.”

If only the pope could apply this Golden Rule: Do unto women as you would have them do unto you.