Pakistan has decided to go ahead with the 450 MW Diamer-Bhasha dam in the Gilgit-Baltistan area on the Indus river. Diamer-Bhasha dam is being jointly constructed by a Chinese state-run firm and a commercial entity of Pakistan’s military. A slew of infrastructural projects being pursued by China and Pakistan in the region, including the dam, are taking place in the context of reinforcement of the federal government’s impulse to continue the old structures of control and micro-management. 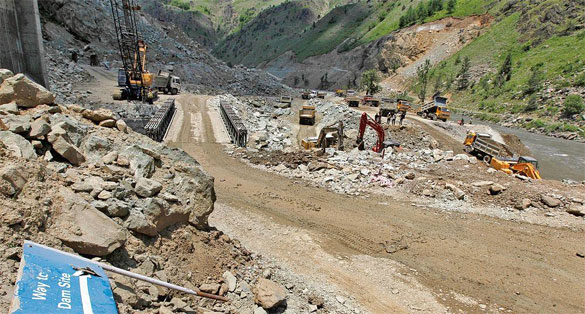 Strategic: The Diamer-Bhasha project is being jointly constructed by a Chinese state-run firm and a commercial entity of Pakistan’s military.

The 1960 Indus Waters Treaty stipulated that the waters of the three eastern rivers — Ravi, Beas and Sutlej — would be made available for unrestricted use by India. The waters of the three western rivers — Indus, Jhelum and Chenab — were allowed to flow for unrestricted use by Pakistan, except for limited use by India such as generation of hydroelectric power from run-of-the-river plants. India and Pakistan have built dams on either side of the Line of Control. On the Chenab, India has built Salal, Baglihar and Dul Hasti, whereas Kishanganga is built on the Jhelum.

While inaugurating the Diamer-Bhasha dam, PM Imran Khan implicitly invoked the Mangla dam on the Jhelum and the Tarbela dam on the Indus as the other two big dams constructed by Pakistan. Along with the Tarbela dam in Khyber Pakhtunkhwa province, Mangla dam in PAJK was financed through the World Bank (WB) established Indus Basin Development Fund. The fund was set up mainly to allow Pakistan to compensate for its water losses because of the World Bank treaty and build replacement irrigation capacities and harness electricity. An American consortium of eight firms constructed the dam in 1967 with reportedly more than 50 per cent funding coming from US sources. As per an estimate, the construction involved nearly 4,500 expatriates and 9,000 Pakistani workers.

The construction of that dam fulfilled its mandate though leaving behind a litany of local grievances that have become part of the community’s institutionalised memory. The dam halted all agricultural activity along the river Jhelum and led to displacement on a wide scale of more than 81,000 people. On a field trip to Mirpur in 2006, the locals lamented to this writer the loss of historical sites, including a temple, as the old town was submerged due to the dam reservoir. The dam led to a second wave of migration from Mirpur area to the UK.

In the first wave around the first quarter of the 20th century, many Mirpuris had earlier settled down in the UK after working as coal stokers for the British steamships. During the second wave, the British government had originally granted 400 work permits, though family ties enabled the migrants to grow manifold in the years to come. Consequently, Mirpuris and their descendants are one of the largest South Asian communities in the UK. A smaller segment also lives in the Midwood area of Brooklyn borough of New York city. With agricultural fields lost for perpetuity, fluctuating foreign remittances have become a financial lifeline for the locals.

The displacement fuelled an already festering political movement as the locals questioned the official claim that PAJK, called ‘Azad Kashmir’ in Pakistan, is an independent entity. In actual practice, the powers are less than those granted to the Pakistani provinces. Several of its local leaders, most prominently, late Abdul Khaliq Ansari, spent several years in Pakistan’s jails for questioning official duplicity. In the 1990s and the first decade of the 21st century, a section of the Mirpuri community leaders protested whenever representatives of the Pakistani government came to Britain. An Anti-Mangla Dam Committee was formed in the UK. Apart from apparent mismanaged relief and rehabilitation, Mirpuris allege that they have to suffer far more electricity cuts in contrast to neighbouring Punjab province.

Coming to Gilgit-Baltistan, ethnically closer to Kargil district of Ladakh, the displacement due to the proposed dam will be far less as compared to Mangla dam on account of sparse population. Nevertheless, the political context in which the construction will take place is even more constricting. China and Pakistan are connected through the Islamabad-Kashgar-Karakoram highway that traverses through the region. The 1949 Karachi agreement signed between the Muslim Conference-led PAJK and Pakistan government separated the region from PAJK and gave direct control of the region to the federal government.

In March 1999, the Supreme Court of Pakistan had ordered that the Northern Areas be given the same political, economic and administrative rights as given to the other provinces of Pakistan. Northern Areas Council, an executive body of the region, became the legislative council, though the elected deputy chief remained subservient to the chief secretary, appointed by the federal government. The chief executive of the council was the Islamabad-based Federal Minister for Kashmir affairs and Northern Areas.

A confusion has marked Pakistan’s international position on the region. In 2006, Pakistan’s ambassador to Belgium, Mohammad Sayeed Khalid, stated that the Northern Areas was a part of Pakistan and therefore the United Nations resolutions, giving the people of Jammu and Kashmir the right to decide between India and Pakistan, didn’t apply to the region. The diplomat’s response came in response to the Emma Nicholson report on J&K, which was presented to the European Parliament. The report had raised the issue of lack of constitutional rights for the people of Northern Areas. On August 29, 2009, Pakistan’s Prime Minister Yousaf Raza Gilani announced political reforms in Northern Areas and renamed the region as Gilgit-Baltistan. A legislative assembly was created with the post of chief minister to spread the notion that the region is governed by locals.

In 2018, a committee headed by Sartaj Aziz had recommended the abolition of Islamabad-based Gilgit-Baltistan council. The launch of the dam came in the backdrop of a reversal of decision to loosen control as the new government decided to retain the council which is headed by the Pakistan PM. In June this year, after the completion of a five-year term of the assembly, PM Imran Khan appointed a caretaker CM, a retired police officer. The elections have been postponed as the voter lists are apparently incomplete.

Luv Puri is a Journalist and author