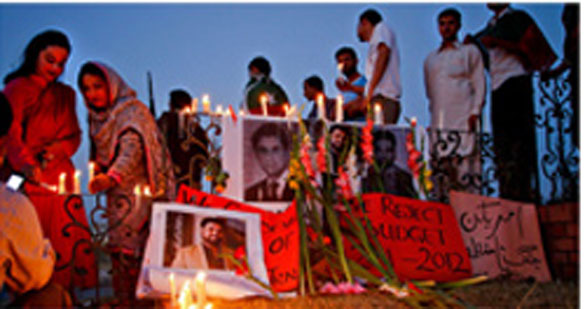 Intelligence obtained before Saleem Shahzad's disappearance and after the discovery of his body shows that ISI officials directed the attack to silence criticism. Obama administration officials believe that Pakistan's powerful spy agency ordered the killing of a Pakistani journalist who had written scathing reports about the infiltration of militants in the country's military, according to U.S. officials.

New classified intelligence obtained before the May 29 disappearance of the journalist, Saleem Shahzad, 40, from the capital, Islamabad, and after the discovery of his mortally wounded body, showed that senior officials of the spy agency, the Directorate for Inter-Services Intelligence, directed the attack on him in an effort to silence criticism, two senior administration officials said.

The intelligence, which several administration officials said they believed was reliable, showed that the actions of the ISI, as it is known, were “barbaric and unacceptable,” one of the officials said. They would not disclose further details about the intelligence.

But the disclosure of the information in itself could further aggravate the badly fractured relationship between the United States and Pakistan, which worsened significantly with the U.S. commando raid two months ago that killed Osama bin Laden in a Pakistan safehouse and deeply embarrassed the Pakistani government, military and intelligence hierarchy. Obama administration officials will deliberate in the coming days how to present the information about Shahzad to the Pakistani government, an administration official said.

The disclosure of the intelligence was made in answer to questions about the possibility of its existence, and was reluctantly confirmed by the two officials. “There is a lot of high-level concern about the murder; no one is too busy not to look at this,” said one.

A third senior U.S. official said there was enough other intelligence and indicators immediately after Shahzad's death for the Americans to conclude that the ISI had ordered him killed.

“Every indication is that this was a deliberate, targeted killing that was most likely meant to send shock waves through Pakistan's journalist community and civil society,” said the official, who like others spoke on the condition of anonymity because of the delicate nature of the information.

In a statement the day after Shahzad's waterlogged body was retrieved from a canal 96 km from Islamabad, the ISI publicly denied accusations in the Pakistani news media that it had been responsible, calling them “totally unfounded.”

The ISI said the journalist's death was “unfortunate and tragic,” and should not be “used to target and malign the country's security agency.”

The killing of Mr. Shahzad, a contributor to the website Asia Times Online, aroused an immediate furore in the freewheeling news media in Pakistan.

Shahzad was the 37th journalist killed in Pakistan since the 9/11 attacks, according to the Committee to Protect Journalists.

Pakistan's civilian government, under pressure from the media, established a commission headed by a Supreme Court justice to investigate Shahzad's death. The findings are scheduled to be released early next month.

The anger over Mr. Shahzad's death followed unprecedented questioning in the media about the professionalism of the Army and the ISI, a military-controlled spy agency, in the aftermath of the bin Laden raid.

Since that initial volley of questioning, the ISI has mounted a steady counter-campaign. Senior ISI officials have called and visited journalists, warning them to douse their criticisms and rally around the theme of a united country, according to three journalists who declined to be named for fear of reprisals.

Mr. Shahzad, who wrote articles over the last several years that illuminated the relationship between the militants and the military, was abducted from the capital three days after publication of his article that said the al-Qaeda was responsible for an audacious 16-hour commando attack on Pakistan's main naval base in Karachi on May 22.

The attack was a reprisal for the Navy's arresting up to 10 naval personnel who had belonged to a al-Qaeda cell, Shahzad said.

The article, published by Asia Times Online, detailed how the attackers were guided by maps and logistical information provided from personnel inside the base.

Particularly embarrassing for the military, Shahzad described negotiations before the raid between the Navy and an al-Qaeda representative, Abdul Samad Mansoor. The Navy refused to release the detainees, Shahzad wrote. The Pakistani military maintains that it does not negotiate with militants.

Shahzad prided himself on staying out of the mainstream press, preferring, he wrote in a preface to his recently published book, Inside al-Qaida and the Taliban, to challenge the “conventional wisdom.” He had submitted articles to Asia Times Online, which claims 150,000 readers, since 2001 when he was a reporter in Karachi uncovering corruption in the public utility, the editor of the website, Tony Allison, said.

He broke into the limelight two years ago with an interview with Ilyas Kashmiri, a highly trained Pakistani militant allied to al-Qaeda. Kashmiri is believed to have been killed in a drone attack in early June.

According to associates, Shahzad cultivated contacts inside the military and the intelligence agency and members of militant groups, some from his student days in Jamaat Islami, a religious political party.

Some of his stories were threaded with embellishments. Soon after the bin Laden raid, Shahzad wrote that General David H. Petraeus visited the chief of the Pakistani army, General Ashfaq Parvez Kayani, and informed him, an account the White House strongly disputes. Pakistani journalists questioned the authenticity of some of Shahzad's reporting: whether those doubts arose from professional jealousy or were well founded was never clear.

But the ISI had been interested in Shahzad for some time.

In an email written to Ali Dayan Hasan, the head of Human Rights Watch in Pakistan, which Shahzad instructed Hasan to release if something happened to him, Shahzad gave details of an October 17 meeting at ISI headquarters, where two senior officials in the press section wanted to discuss an article he had written about the release of an interrogated Afghan Taliban commander, Abdul Ghani Baradar.

At the end, Shahzad said he had been given what Hasan said he understood to be a veiled death threat from the head of the press section, Rear Admiral Adnan Nazir. “We have recently arrested a terrorist and recovered a lot of data, diaries and other material during the interrogation,” Shahzad quoted Rear Admiral Nazir saying. “The terrorist had a list with him. If I find your name in the list, I will certainly let you know.”

In its statement after the death of Shahzad, the ISI said the agency notifies “institutions and individuals alike of any threat warning received about them.” There were no “veiled or unveiled threats” in the email, the ISI said.

Hameed Haroon, the publisher of Dawn, an English-language newspaper and the head of the newspaper publishers' association in Pakistan, said that the journalist had confided to him that “he had received death threats from various officers of the ISI on at least three occasions in the past five years.”

It was possible that Shahzad had become too cavalier, said Ayesha Siddiqa, a Pakistani columnist and author.

''The rules of the game are not completely well defined,” she said. “Sometimes friendly elements cross an imaginary threshold and it is felt they must be taught a lesson.”

The efforts by the ISI to constrain the news media have, to a degree, worked in recent days. The virulent criticism after Shahzad's death has tempered a bit.

A Pakistani reporter, Waqar Kiani, who works for the British newspaper The Guardian, was beaten in the capital after Shahzad's death with wooden batons and a rubber whip, by men who said: “You want to be a hero. We'll make you a hero,” the newspaper reported. Mr. Kiani had just published an account of his abduction two years earlier at the hands of intelligence agents.