Delhi Riots: 53 Are Dead In Violence of the Kind the Capital Has Not Seen In Decades

After a week of reporting every day from Delhi’s riot-torn neighbourhoods, a few facts have emerged through a haze of toxic rhetoric and fake news. 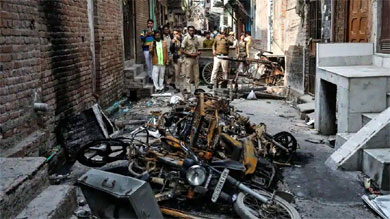 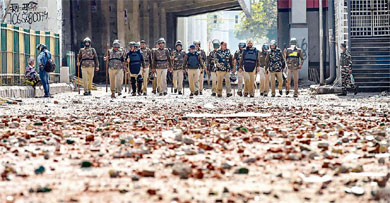 The police failed people of both religions. But the ineptitude or callousness was compounded by reports of communal bias when it came to police action in Muslim neighbourhoods (REUTERS)

First, the violence was not a spontaneous clash or argument-gone-wrong between two groups of people, supporting or opposing the citizenship legislation. Every riot victim I have met, Muslim and Hindu, has spoken of the assaulters being complete strangers and outsiders to their immediate colony. In fact, within local communities, Muslims and Hindus have for the most part shielded each other. The pattern of violence and multiple eyewitness accounts all point to a deliberate unleashing of men, armed with swords and irons rods, into targeted areas.

Second, notwithstanding a few good men in the police force who stood their ground and did their job courageously, and notwithstanding the fact that in parts of north-east Delhi, the police too came under ferocious attack, the police, for the most part, has enabled this carnage.

Though Right-wing trolls want to push a religious wedge through the debate over the role of the police, please talk to victims. Once again, you will find Muslims and Hindus saying the exact same thing — the police, was at best, unresponsive. Hundreds of SOS calls were not taken seriously. Sunita, the wife of Prem Singh, a poor rickshaw puller, who was shot dead when he stepped out to buy milk, was turned away from the police station when she went to file a missing person report. Hari Singh Solanki, whose young son, Rahul, was killed by the mob, told me, “Had the police responded on time my son may have been alive today.” The exact same sentiment was echoed by Jitendra Kumar, the owner of Pandit Medicos, a small pharmacy that was burnt. The police failed people of both religions. But the ineptitude, haplessness or callousness was egregiously compounded by reports of communal bias and wilful complicity when it came to police action in Muslim neighbourhoods.

I have met multiple victims who speak of the police charging at their houses alongside violent mobs. We have seen video evidence where policemen too are hurling stones. And there is the bone-chilling video, where young men are lying injured and bleeding on the road, pleading for help as the police purportedly make them sing the national anthem. Faizan, from that video, is dead. We met the family of Kausar Ali, another young man from the video. He is critically injured and in hospital.

The third inconvenient truth: India has failed its riot victims twice over. The usually omnipresent politician who makes sure to insert himself into every photo-opportunity is entirely missing on the ground. Through the week, I have met abjectly poor people, whose poverty has amplified their grief and loss. Most cannot even afford the Rs 800 an ambulance run needs.

At the Guru Teg Bahadur hospital, there is still a trickle of desolate families looking for bodies and, more important, for clarity and closure. Here I met Nasruddin, who is visually impaired and cannot see, and his young wife Gulshan, all of 25 years old. They travel from their village in Uttar Pradesh by a tempo or auto rickshaw every single day in search of the body of Gulshan’s father, Anwar. He was burnt alive and his body is unidentifiable, save a single leg that is intact but has been severed from the body. Another family has also laid claim to the same body, so DNA tests must be conducted. This grief-stricken couple spends 12 hours at the hospital every day from dawn to dusk, with no help or support except what community activists are able to provide. While journalists like myself share the small cash we carry to help victims get by, one day at a time, this is ad hoc and insubstantial. Where is the government? Why is there no government help-desk at the hospital? Why are there no government officials to hand-hold riot victims, to supply ambulances and vehicles, to offer food and water and transport? Isn’t this the basic job of the Indian State?

The prime minister appealed for calm during the riots but has made no attempt at outreach with the riot victims. The home minister, to whom Delhi Police reports, lashed out at Opposition parties for instigating violence, but expressed no emotion for the victims. The Delhi chief minister has shown a tentativeness in relief efforts and outreach that is totally antithetical to the crusading anti-corruption activist whom people first rallied around. Rahul Gandhi has “visited” the riot-torn areas, but one week after the worst is over. And we, the people — we want to move on, we don’t want to hear the grim details, we want to talk about something else, anything but the fact that 53 are dead in violence of the kind the Capital has not seen in decades.

Barkha Dutt is an award-winning journalist and author

Original Headline:  Delhi riots: How India has failed its riot victims. Twice over