By Adil Akhzerand and Nirupama Subramanian

In an upstairs room of their modest house in Ranipora village, three generations of the Ganjoo family keep the winter cold out with kangris and blankets and ponder if they would have been better or worse off leaving Kashmir in 1990 with most of the others in the Pandit community as they weigh loss against gain of the last three decades. 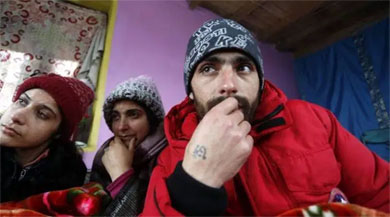 Ashish Ganjoo, 26, with his sisters, Sheetal (left) and Komal, at their home in Anantnag. (Express photo: Shuaib Masoodi)

The Ganjoos are one of just three Pandit families of their village that stayed on in the Valley as the remaining 60 or so families left fearing for their safety against a background of rising militancy and the killings of several Pandits.

Anantnag had witnessed communal trouble in 1986 and most Pandit families in the district fled when the government appeared to have lost control over the emerging situation four years later. 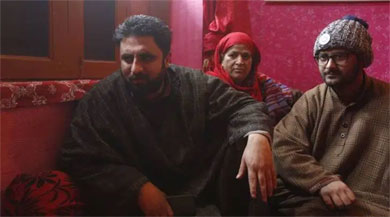 “We did not have the resources to leave and start life anew in Jammu. Another factor was that my parents did not want to leave this village and their home. We could not go without them. So we trusted in god, and our (Muslim) neighbours, who wept, and said they would not let us go. There was love and affection for us. So we stayed and our neighbours supported us a lot. It was the right decision at the time,” said Ashok Kumar Ganjoo, 58, who is employed as a government pharmacist.

“But today I feel it was not the right decision,” he said.

His 86-year-old mother Lakshmi Shri echoes that view. The reason: “migrant Pandits” got all the political attention, benefited from government compensation packages that helped them with quotas in education and employment at places where they went while the “non-migrants”, as those who stayed on describe themselves, became invisible.

Today, as migrant Pandits demand that the government resettles them in the Valley, the divide with the non-migrant is perhaps sharper than it has been all these years.

On January 20, 1990, the first big batch of Pandits had to pack their belongings and leave after a night of public threats by militants — the exodus surging between March and May that year and continuing in a steady stream for the next few years. 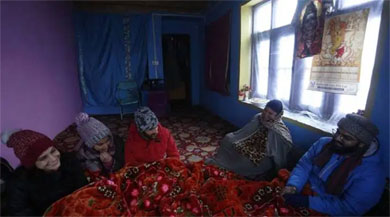 Members of Ganjoo family with their cousin Puneet Thaploo(in blue) inside their house at Bhatpora village of South Kashmir. (Express photo: Shuaib Masoodi)

Until in all, says Sanjay Tickoo, who heads the Srinagar-based Kashmiri Pandit Sangharsh Samiti, fewer than 800 Pandit families remain in the Valley today, of the 77,653 that lived here in 1989, according to his estimates.

They live as they had always done, among Muslim neighbours. It was not always easy as Kashmir lurched from crisis to crisis but the small remnants of the community stuck on.

Today, he said, the outflow of Pandits continues, “not because they feel suddenly unsafe but because of their economic condition. There is no means of livelihood. They don’t get government jobs and there are no private jobs. Now if someone in the younger generation is lucky to get a job outside, they take their parents with them,” said the Srinagar-based Tickoo. 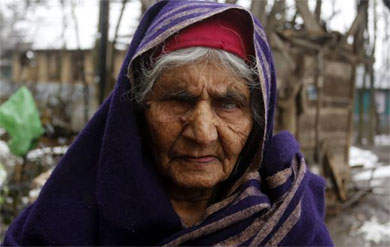 From 2018, after the J&K High Court, on a petition by Tickoo, asked the government to consider the demands of the non-migrants, the state government included them in the 2008 Prime Minister’s return and rehabilitation scheme. Separately, they agreed to recruit 500 non-migrant youth. “That file is still moving through the secretariat and we hope it will be Okayed in a couple of months,” Tickoo said.

Meanwhile, Ganjoo’s 26-year-old son Ashish, an Arts graduate from the Anantnag degree college, is struggling to find employment. “I am seriously considering leaving. Don’t get me wrong, it is not because of security reasons. We have no such problems. I am thinking of leaving because I need to get myself a job. The government jobs are not for us and the private sector jobs that are available are low-paying,” said Ashish.

His cousin Punit Thaploo is visiting from Delhi and the difference between them is apparent. Compared to the hesitant Ashish, Thaploo is a confident 30-year-old engineer, who has just quit his job with the Boston Consultancy Group, and is thinking of setting up a coffee shop in Cyber City, Gurgaon. “The living conditions are better outside, the opportunities are better. Those who stayed back have become economically backward,” said Thaploo.

Ironically, while his cousin looks longingly at the outside world, Thaploo is looking at Kashmir.

His own parents fled their joint family stead in Wanpoh, and this is only the second time that he has returned to the Valley. The first was in 1994, for a family wedding at the Ganjoo home.

“This time, I visited Wanpoh and the home we abandoned all those years ago for the first time. It was an emotional moment for me,” said Thaploo, describing Kashmir as “the mother of all Pandits”, and talking about the importance of preserving the Kashmiri language and the Sharda script.

Ashish’s elder sister Sheetal, who went to Delhi to live with the Thaploos, is doing a PhD in Human Resource Management at Delhi University. But their younger sister Komal grew up and studied, like Ashish, in Anantnag, and has few if any employment prospects. 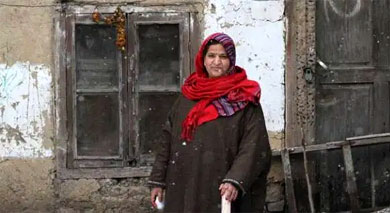 In Brenti Batpora of village Dialgam, Anantnag, 56-year-old Sunil Bhan is angry that even the BJP government at the Centre, from whom “we had high expectations” has not acknowledged the plight of the non-migrant Kashmiri Pandit families. Bhan’s family did not leave in 1990 for the same reasons as the Ganjoos — no means to live in Jammu.

Showing a copy of a letter he wrote to the Prime Minister’s Office in 2017 asking for a job in the government for himself and his brother, at a time when his grandmother was ill and the family did not have money for her treatment — the family has 10 kanals of land, on which they grow enough only for themselves —- Bhan says he went to Delhi to hand over the letter personally, and make sure it was “received” with an official stamp.

“But I got no reply or call back, not even to say there are no jobs. That was the highest office in the country, so what could I expect from anyone else in the central government or state,” says Bhan. “Now that the government is thinking of helping Pandit families return, they should think of doing something for those who never left.”

Bhan and three other families are trying to maintain the temple in the village from falling into disrepair. They raised money from some Pandits who migrated from the village to build a wall around it.

In Ranipora, the Ganjoos and the two other families similarly maintain a small temple named Nagbal, under which there is a perennial spring. “It was our Muslim neighbours who conveyed to the militants that this temple should not be touched. They did not harm it and today it is intact and we pray there,” said Lakshmi Shri, Ashish’s 86-year-old grandmother.

“We are culturally distant and isolated from our own community. During deaths or marriages, it is our neighbours who support us till our relatives arrive. When someone dies, it is Muslim neighbours who sit through the night with us, make all the preparations, even help to carry the body to the cremation ground. We celebrate our festivals like Shivratri and Diwali with our neighbours, and we celebrate Eid with them,” said Ashish, who has formed a group called Kashmiri Pandit Helping Hands to assist poor Pandit families. He recently petitioned the District Commissioner asking the administration to build walls and sheds at cremation grounds, and at temples.

Tickoo says non-migrant families are being punished for not leaving the Valley. “We are seen as traitors. The migrants have all the access to the BJP ministers and Ministry of Home Affairs to present their case, we have none,” he says.

Special Relief and Rehabilitation Commissioner T K Bhat told The Indian Express that in 2009, the state government had announced a policy to assist Kashmiri migrants who want to return to the Valley, including a Rs 7.5 lakh. “Under that policy till date, we have only three people who took assistance. I am not aware of any new policy”.

Original Headline: Kashmiri Pandits In Kashmir: Those who stayed back have a home — and a roomful of regret