Eternal Darkness of a Camouflaged Mind 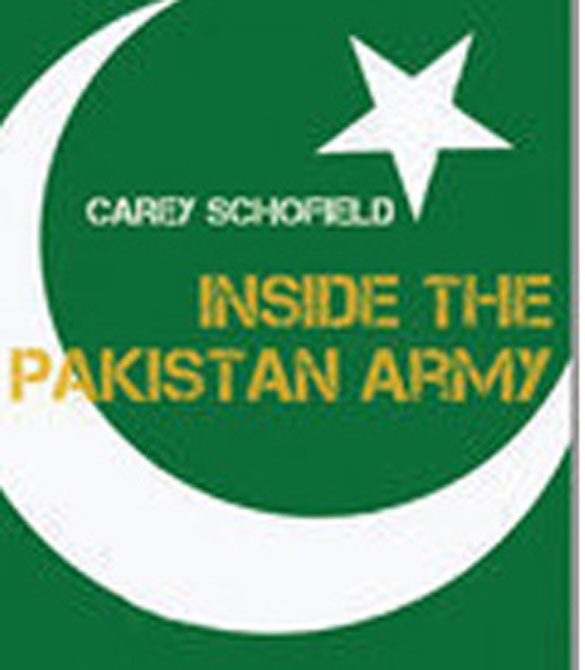 Inside the Pakistan Army

Embedded journalism is a twisted game. When a reporter has to rely on the access given (versus access gained or uncovered), any narrative of investigation will be inherently skewed.

﻿﻿No maps. Zero photography. Lousy editing. Not enough hierarchical detailing. A bunch of convenient deletions. But with ample khaki muscle to be read cover to cover, especially if your nightmares feature that garrison town of Rawalpindi. Caution is advised. "Inside the Pakistan Army" is a book that military sycophants will enjoy and GHQ critics will want to burn. But both those passionate clans will probably forget about it soon enough. "Inside the Pakistan Army's Mess Hall" may have been a more suitable title, where anyone who has had the privilege of dining will agree that - much like the book's content - the food is bland, but the atmosphere is, literally, to die for.

Now, some context. Carey Schofield has been where no woman (or man) has been before, at least not for seven years: Inside the belly of the beast that is the Pakistan Army. Interestingly, by default or design, she has managed to slip in an important sliver of information here or there in 10 chunky, broad chapters that shouldn't have taken 7 years to be processed, but then again, Islamabad (correction, Rawalpindi) is rife with rumours about the personal friendships and palace intrigues that may have hindered Ms Schofield's concentration.

Now, a disclaimer. Embedded journalism is a twisted game where the prism of insight is facing the other way. As a journo has to rely on the access given (versus access gained or uncovered), any narrative of investigation that proceeds thereon is - by the very nature of the logistical dependence on sources and areas that are 'cleared' by the military - tilted by the inherently skewed setting. Yes, that means embedded journalism, unless thoroughly crosschecked by 'the morning after' reporting needed to independently verify claims made by 'pliant' military sources, will be biased. Frankly, Ms Schofield hasn't well exploited the first part of the bargain (embed), and runs out of steam to deliver on the second bit (verify). And here's why.

In her first chapter, The Place of the Army in Pakistan, she fails to challenge the traditional khaki narrative on all the old issues: "Azad Kashmir...is a self-governing state under Pakistan." Military governments "provided arguably the most competent and benign governments" in the country's history. So representative is the Army that "there is barely a family that has not had someone in uniform". And of course, "in their air-conditioned drawing rooms the generally idle rich talk [about Army affairs]...and the less they know the more they talk".

But somewhere, in the middle of this brass-bulletin, Schofied also manages to slip in the tabooed topic of Shia-Sunni tensions within the institution, quoting two meetings - one with a careless Shia general, the other with a Sunni brigadier who is disdainful of Muharram. For the culture-vultures, she also recounts the "reverential telling" of Shaheed stories in Army units that are a part of the "massive involvement with the idea of death" in the institution. Kafka and Kashmir mix well here, if you really, really read between the lines.

By the second chapter, How the Pakistan Army Got to Where it is Today, the 'embed bias' makes for tardy reading . Just the opening line, "The Pakistan Army, like any other great institution, has its own view of the events that have shaped it", immediately derails the critical thinker. I'm even willing to put money on the claim that Ms Schofield had very little to do with the drafting of this chapter, for such is the level of Army-centric discourse that even the typos ("ordnance", which means ammunition, is used casually instead of "ordinance", which means legal decree) reflect those commonly made by the old chaps at the ISPR. Besides owning up to a "Hindu India", the "restive Bengalis", "squabbling politicians" and Ayub Khan's "beneficial defence treaties" as part of her own narrative, Schofield also manages to gloss over the controversial "Martial Races" recruiting doctrine from the Raj that doesn't quite fit well into the policies of a seemingly nationally representative Pakistan Army that continues to be Punjab-centric.

One critical insight, even though she is mouth-piecing it, comes from her analysis about why the "region" that is now Pakistan more prone military rule: "The more autocratic style of early colonial rule - the so called "Punjab School" of horseback governance... based on rough and ready justice delivered in local languages by men who were largely free from bureaucratic supervision lasted longer here". In effect, Ms Schofield, and/or invisible sources think Pakistanis deserve the same treatment as meted out by imperialist martial lawyers like Napier and Lawrence from 150 years ago because there is a historical context of this region being recently administered by British generals! Brilliant.

But besides the expected khaki-accentuated pitfalls ("the issue of Kashmir was of less emotional significant to the Bengalis") about the wars of 1947-48 and 1965 - both of which collectively receive a grand total of two paragraphs for detail - along with glaring chronological errors (Pervez Musharraf awarding a posthumous medal in 1994 - when he was in no official position to award any such thing - to a British officer who went 'rogue' in '47 and fought for the Pakistanis in Gilgit) as well as factual oversights (DG-ISI in the 1980s was "General Attur Rehman", not the feared the Akhtar Abdul Rehman we all know), Ms Schofield does introduce us, perhaps inadvertently, to the politicised corners of Pakistan's most camouflaged minds.

For example, the proliferation of nuclear weapons by ZA Bhutto is portrayed as a policy that was impinged, almost unwillingly, on Pakistan's finest soldiers, for ZAB introduced nukes because he wanted to "limit the role of the men in uniform as the ultimate defenders of the state (Ayub Khan had earlier refused to develop a military nuclear capability...)". As for Zia, with no analysis or citations about the documented or circumstantial evidence that is related to his death, she passes unreserved judgment about the demise of the dictator ("no convincing evidence that this was anything more than a catastrophic machine failure".) Moreover, she mentions Kargil all but once, with the focus being entirely on Nawaz's defeatism, not Musharraf's operational planning, or lack thereof. By the way, Musharraf is also "saner than most of the civilians" she knows.

Much like the institution she is claiming to be inside of, Ms Schofield fails and succeeds with miscalculated randomness throughout the book. Two interviews stand out, one featuring the now killed intelligence operative, 'Colonel Imam' (who talks about teaching a "naughty" and young Gulbaddin Hekmatyar guerrilla tactics) and the other a retired NCO (who knows more about the Taliban's local reorganisation bid in FATA than has been published in a while). Schofield has also managed to get away with a brilliant quote or two about the ISI's reflections on Afghanistan ("We became too possessive") and anecdotes of the Army's Kashmir-centric raison d'etre (an SSG deserter who was pardoned instead of being court martialed because he had fled to fight the Indians in Kashmir).

For lack of her evident historiographical preparation (there are no notes), the most honest assessments in her book are not political ones, but operational ones, especially recent 'from-the-field' dispatches by officers about the Army's severe counterinsurgency failures in the early fighting days of FATA. But, Ms Schofield has squandered seven valuable years of her life, for her product doesn't seriously acknowledge many critical, even existential questions that Pakistan Army watchers want answered: What is the nuclear policy? How does the promotion regime really work? Aren't the similarities between the Army's religiosity and its enemies' radicalism more important than the differences between them? What really happened in the Lal Masjid assault? And Rah-e-Rast? What about drone strike coordination with the US? Are younger officers now more anti-Taliban than anti-India, considering all the action they've ever seen is on the western side of the country? There is nothing intellectual about this book. But, perhaps most shockingly, her own "Woman's Experience on the Frontline of the War on Terror" totally fails by Schofield providing no insight about the women who are now serving in the Pakistan Army - as soldiers as well as wives - battling the inherent, even natural misogyny that comes with any fighting force. Read this book for Schofield's failings as an embed, as well as for the Army's untactful censorship regime, but also to actually measure the GHQ's intellectual capacity for commissioning such historically important work to an overwhelmed minnow who has penchant for uniform, but not for questioning the men in it.

The writer is a former Shorenstein Fellow at the Harvard Kennedy School and works for Samaa TV. He can be reached at @wajskhan on Twitter and wajahat_khan@hks.harvard.edu