A Spiritual Magazine with a Difference

It’s almost the only magazine that I read these days. The English monthly Spirit of Islam, published from Bangalore, is a treasure-trove of wisdom, a real blessing for spiritual seekers. Its editor-in-chief is the well-known New Delhi-based Islamic scholar, 90 year-old Maulana Wahiduddin Khan. Most of its articles are by the Maulana himself, who is one of the most prolific writers today on Islam at the global level. 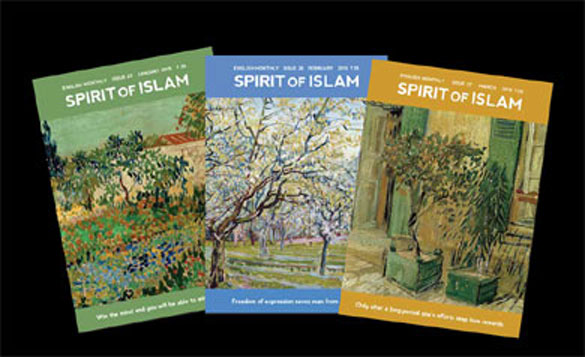 Launched almost three years ago, Spirit of Islam is a spiritual magazine with a difference. For one thing, unlike most other ‘Islamic’ magazines, it is not linked to any particular Muslim sect. Discussions about minor details of jurisprudence or Fiqh and rituals and debates about external forms of piety, such as about dress and deportment, may be a major focus of many other ‘Islamic’ magazines—but these do not find any space in Spirit of Islam, whose focus, its masthead announces, is ‘global peace and spiritual living’. Absent, too, from its pages are heated polemics seeking to prove the veracity of one Muslim sect and the falsity of the rest, hagiographical accounts of Muslim religious and political figures, past and present, uncritical laudatory accounts of Muslim history, diatribes against so-called ‘enemies of Islam’, lamentations about the supposed pathetic conditions of Muslims today, accusations against non-Muslims for allegedly conspiring against Muslims, and so on—issues that that are the staple fare of much of the Muslim media.

If many other Muslim-run magazines are narrowly Muslim-centric and are geared essentially to a Muslim readership, Spirit of Islam is refreshingly universal in its outlook and approach and characterized by very obvious goodwill towards people of all faiths. It is concerned with the most fundamental task of all—of making people, irrespective of religion, aware of God’s Creation Plan.

Applied Islamic spirituality in an idiom suited to the modern age is the focus of Spirit of Islam. It seeks to provide rational evidence for Islam, communicating ancient wisdom in a mode and idiom intelligible and acceptable to the modern mind. Many articles in the magazine take the form of short, incisive reflections on a particular Quranic verse or a hadith (a report attributed to the Prophet Muhammad), bringing out its implications and continuing relevance in our times. Other articles seek to draw lessons from everyday happenings, reflecting an understanding of spirituality as being the ability to convert daily events into spiritual learning experiences. This spirituality is one that is inseparable from intellectual enquiry and serious engagement with the real world.

Spirit of Islam stays clear of specifically Muslim community-related issues. The spiritual insights and lessons it provides are universal in their relevance. Issues that it focuses on, such as the purpose of life, life after death, religion and science, evidence for God in nature and in our selves, personal transformation, handling negative emotions, the need for positive thinking, dealing with life’s myriad challenges, negotiating relationships and so on, would be of interest to just about anybody searching for meaning and purpose in life beyond material gratification. Not surprisingly, the magazine has a fair number of non-Muslim readers.

Maulana Wahiduddin Khan is one of the foremost proponents of interfaith dialogue and understanding at the global level, having written numerous books and many times that number of articles on the subject. Deeply concerned with the brutal terrorism in the name of Islam that continues to devastate large parts of the world, which he regards as completely anti-Islamic, he has made promoting peace one of his foremost priorities. This is reflected in the pages of Spirit of Islam, which regularly carries insightful articles on the importance of peace in Islam and on the need for Muslims to relate with love, peace, well-wishing and compassion among themselves and with others. Great stress is given to the need for Muslims to cease regarding others as their enemies, which, the Maulana insists, is not warranted in Islam at all. Muslims are constantly reminded that of their duty to convey God’s message to others, for which they are told that they must build bridges with them and live together with them in harmony. The magazine devotes considerable space to critiques of the hate-driven ideology of terrorists parading in the guise of champions of Islam and their erroneous interpretation of the concept of jihad.  Linked to this are articles that seek to counter the political interpretation of Islam, which the Maulana regards as a wrongful innovation and as at the root of the phenomenon of terrorism in the name of Islam today. Other articles underscore the need for transformation of the individual, and rebut, using solid Islamic arguments, the notion, so forcefully championed by advocates of ‘Islamism’, of an ‘total Islamic system’ that they insist Muslims must establish at any cost if they are to be able to practice their faith.

You can’t judge a book by its cover, they say—and the same, one supposes, applies to a magazine, too. But the cover of Spirit of Islam conveys an vital message, reflecting the magazine’s understanding of Islam that transcends cultural forms and readily appeals to just about everyone, including people of other faiths. In place of Arabic calligraphy or pictures of mosques or Muslim shrines or people in stereotypical ‘Muslim’ attire—as is the case with many Muslim magazines—its cover page sports a painting of a scene from nature, each issue bearing a different image—of a lotus-filled pond, a cloud-filled sky, or a field festooned with poppies by Vincent Van Gough. Islam is not limited to any particular language or cultural tradition, and nor is it for Muslims alone—that’s what the magazine possibly seeks to convey through its cover.

The magazine is available in printed form—the annual subscription cost is Rs. 400—and it can also be freely downloaded from its website www.spiritofislam.co.in.  The publishers offer a free initial copy—and if you ask them for one and get to read it, you might well be determined not to miss a single issue in the future!