Sons of Abraham: A Candid Conversation about the Issues That Divide and Unite Jews and Muslims

Sons of Abraham: A Candid Conversation about the Issues That Divide and Unite Jews and Muslims 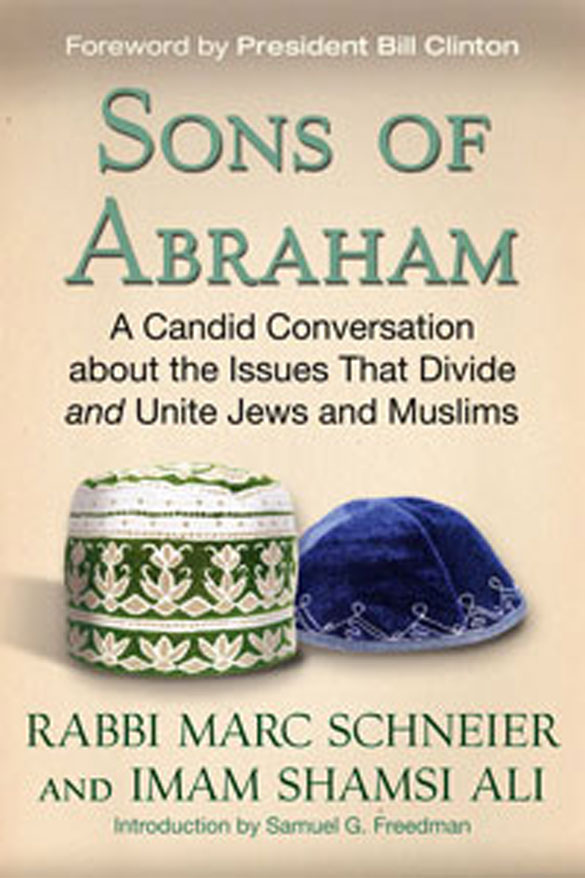 This book is a collaborative venture between two friends, both based in New York, a Jewish rabbi and a Muslim imam. The duo are deeply engaged in together trying to promote understanding, reconciliation, peace and solidarity between Jews and Muslims.

Rabbi Marc Schneier served with the World Jewish Congress and is founder and president of the Foundation for Ethnic Understanding. Brought up in Indonesia, Imam Shamsi is the spiritual leader of the Jamaica Muslim Center, New York City’s largest Islamic centre. Both men grew up with deep prejudices about each other’s community. In this fascinating book we learn how they overcame their mutual mistrust and, developing a close personal friendship, began to work to jointly promote Jewish-Muslim dialogue, friendship, cooperation and solidarity.

The rabbi and the imam reflect on a wide range of issues pertinent to contemporary Jewish-Muslim relations. We learn about the numerous similarities between Judaism and Islam (thus justifying the title of the book—Muslims and Jews, along with Christians, having a common spiritual ancestor in Abraham, a prophet of ethical monotheism). These similarities include belief in the one God and love and care for God’s creatures going beyond boundaries of community and religion. The common or overlapping spiritual heritage of Jews and Muslims can thus serve as a firm basis for cooperation between Muslims and Jews. So, too, can the legacy of certain Jewish and Muslim figures down the centuries who exemplified Jewish-Muslim collaboration, some of whom the book highlights.

While the authors recognise some of the things their faiths have in common, they also refer to aspects in their respective religious traditions that radicals have misused to foment violent conflict between their communities, these being at the root of the Israel-Palestine issue today. The authors reflect on alternative ways of interpreting their traditions so that they can be understood instead as a means for promoting inter-community harmony, including between Jews and Muslims. Given that the way communities perceive the ‘other’ is a core issue in inter-community relations, the efforts of the two friends in seeking to promote more accepting, respectful and inclusive understandings of each other’s faiths and their adherents from within their own religious tradition is a major contribution that they make.

Along with this, the rabbi and the imam share their views of how Palestinians and Israelis can peacefully coexist and thus resolve the decades’-old issue of the political status of a land that is considered religiously significant by millions of people.

As can be expected, the rabbi and the imam do not agree on every subject. Yet, the two friends do have much common ground, not least being their commitment to promoting understanding and peace between Muslims and Jews. As they share their stories, narrate their views about relations between their communities and refer to some of the work they have been engaged in to promote Jewish-Muslim cooperation these two men beautifully illustrate the importance of interfaith personal friendships. Their life-stories brilliantly illustrate how such friendships can help overcome deeply-rooted prejudices between members of different religious communities and enable them to work together for the common good, each inspired by faith in and commitment to the one God of us all.