A Parallel History of the Mughal Empire and Its Women, Many of Whom Were Accomplished, Educated, Articulate and Cultured

Daughters of the Sun: Empresses, Queens & Begums of the Mughal Empire 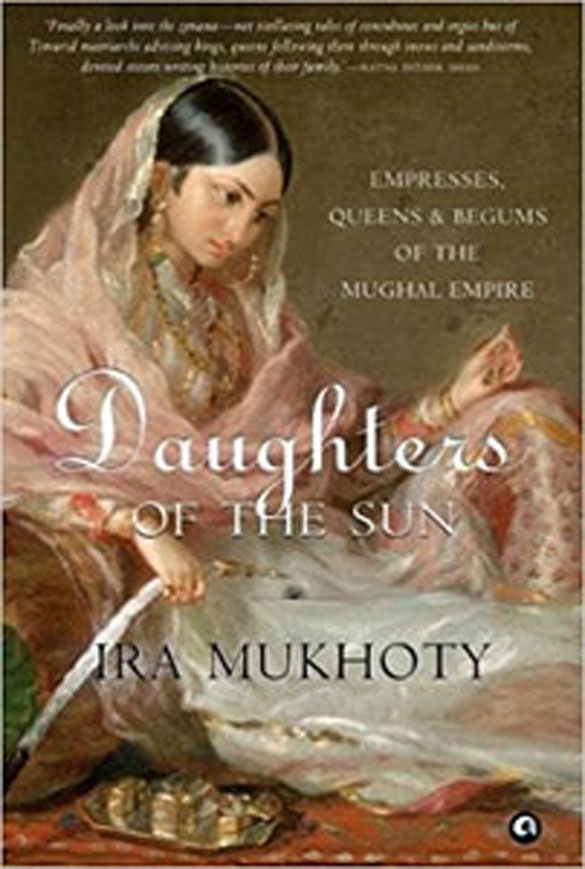 Writers, poets, builders, traders, milk-mothers, providers of sage counsel to brothers and sons, caregivers and protectors of infant princes, peripatetic companions in strange lands accompanying warrior husbands, repositories of dreams and dynasties, accomplished and better educated than their contemporaries anywhere in the world, visible symbols of power and opulence sometimes and sometimes the unseen but politically astute power behind the throne — Mughal women were all this and more.

Daughters of the Sun is a luminous account of the many women who lived in the shadow of their men yet led remarkable lives forming links in a chain that encircled all of Hindustan.

Beginning from 1500, when a 17-year-old Babur marries for the first time, till the lamp of Mughal glory is snuffed out in 1857, this is a first-of-its-kind parallel history. While it is true that the Mughals did not produce a female sultan and that prerogative can only go to the Slave dynasty that gave Delhi its first female ruler in Razia Sultan, it is also true that the lives of women in a Mughal harem were not bereft of accomplishment or education, for when the need arose these women could ride into battle with their husbands (like Hamida Begum), or engage in diplomacy (like Khanzada Begum), write family histories (like Gulbadan Begum), or pen Sufi treatises (like Jahanara).

The word harem itself has an interesting etymology, a distortion of the Arabic word ‘Haram’ meaning sanctuary it is traditionally used for the territory of Mecca where the act of committing a sin is Haraam (forbidden). And so indeed was a Mughal emperor’s Haram, not just a place to house the wives and concubines but also a sanctuary for the widows of the Padshah’s retinue comprising generals, “relatives who sought asylum from other countries, elderly mothers, and grandmothers, widowed stepmothers, unmarried relatives, servants, the entourage of Rajput rajkumaris, children, attendants and tradeswomen of all sorts.”

Lifting the veils of mystique and romance from this cloistered world, Mukhoty shows us life-and-blood women living lives that are either erased by professional historians or reduced to lurid fantasies about oriental harems by European travellers that are, for the most part, mere chimeras, “a fantastical mix of bazaar gossip, stray gleanings of fact and sexual fantasy.” Those looking for scheming wives, languorous concubines, and unfulfilled princesses of royal blood will be disappointed here; in Mukhoty’s telling the Mughal zenana is “a place where accomplished, educated women were prized; well-spoken, articulate and cultured women most likely to advance.”

Of these, perhaps the most powerful and flamboyant is Noorjahan who has coins issued in her name and is allowed to issue Farmans — both kingly prerogatives — and who enjoys the singular privilege of being the only wife of Jahangir for the last 16 years of his life. Of her Sir Thomas Roe, the English Ambassador to the Mughal court is constrained to observe: “Noormehal fulfils the observation that in all actions of consequence in court, a woman is not always an ingredient, but commonly a principal drug of most virtue.”

Over the years, as Turki-speaking matriarchs of Timurid descent died out, the ethnography of the Haram changed: Rajput princesses and Persian women replaced the Chaghtai Turkish ones. Mukhoty points out the great co-mingling of not merely blood lines but interests, for instance a Hindu queen’s ship carried Muslim pilgrims for the hajj since the queen mother, Harkha Bai better known as Maryam-us Zamani, not only conducted a brisk trade from the port of Surat through her agents but also plied the merchant vessel Rahimi in the pirate-infested waters of the Arabian Sea.

Then there are the occasional blots on the proud Timurid line, such as the shameful instance that’s glossed over in the Baburnama when Babur is forced to sacrifice his sister, the 23-year-old Khanzada Begum, by ostensibly giving her in marriage to the Uzbek Shaydani Khan but actually leaving her as “ransom and war conquest.” While Babur is allowed to leave Samarkand and move on to Kabul which he conquers and then the fair land of Hindustan, it would be another 10 years before Khanzada Begum is united with her brother and not before she is divorced by Shaydani Khan and given in marriage to another lower-ranking man.

Mukhoty writes: “It is a testament to Khanzada’s resilience and the Timurid’s gruff pragmatism that no stigma is ever attached to Khanzada, nor indeed any Timurid woman who ‘falls’ to an enemy... reintegrated into Babur’s household as a woman whose sacrifice for the safety of the Padshah will be celebrated not only by Babur and his entire Haram but by his son Humayun and into future generations. When Humayun becomes Padshah Ghazi of Hindustan, Khanzada along with some of the older women, becomes a living repository of the memory of Babur and the Timurid dream. She is the guardian of those threshold stories the early Mughals told themselves...” Khanzada is a true Padshah Begum, “childless, twice divorced, un-bolstered by son or husband” but deserving of this title “in recognition of the valour of her sacrifice and the legitimacy of her memories.”