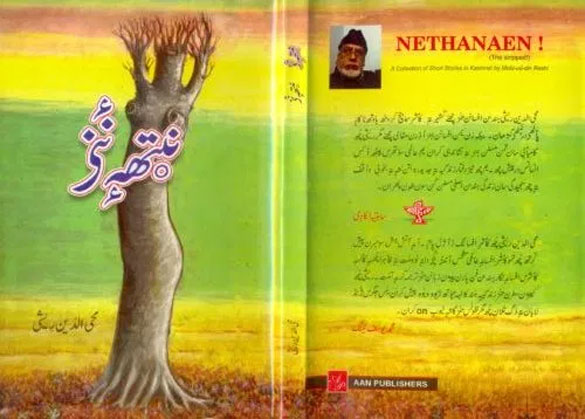 ‘Nethanaen’ (The Naked) is yet another collection of short stories from a Sahitya Akademi awardee, Mohiuddin Reshi, who won accolades for his debut short story collection, ‘aenaaastash’ (Bitter Reflection), for its rich varied themes that portrayed the Kashmir society as it evolved in the aftermath of the 1990 events. The present collection of short stories could be read as a sequel to the earlier collection as, like its predecessor, this, too, reflects on the ailments and maladies that the Kashmir society is beset with and has been suffering from since the eruption of militancy which has shaken us all and, in a way, destroyed the generations-old ethos—pluralism—that Kashmir had been known far and wide. This resulted in devastating the social fabric that had shaped the Kashmir society, but which, because of the changing circumstances, lies in tatters. That is what the title of the book ‘Nethanaen’ implies and it gains special importance as the author has taken pains to mirror the Kashmir society that is looking for a cover to hide the suffering, pain, pathos, loss, helplessness, haplessness and, above all, fatigue that have engulfed it for decades now.

‘Nethanaen’ is an anthology of 36 short stories that have consumed only 112. You can understand how much long each story is and why it shouldn’t take you long to finish the book even in a single sitting. However, it isn’t the length alone that makes the book readable, but also what we are reflecting on. The stories are about us all—men, women, children, young and old—of all faiths who, in one way or the other, have got affected in the recent days. More importantly, the stories aren’t written to take you away from your surroundings, or make you take flights into your imagination, assuming that you are wandering in a world that is so perfect and so beautiful. Rather, the writer makes you walk through in your own lanes and by-lanes with people who are familiar and the circumstances that they confront appear to be your own as if you are experiencing, or have experienced, them. Short stories like ‘How’s that’, ‘rovmut’ (lost), ‘daka’ (abandoned), ‘jhandasbadlyov rang’ (Flag’s Colour has Changed’), ‘Obur’ (Cloud), ‘maajigobur’ (Mother’s Boy), ‘sodah’ (merchandise) and ‘wushner’ (Warming) are at once stunning and painful as they are the stories of every Kashmiri.

‘Nethanaen’ is about you and me, about Kashmiris, in general, who have suffered in one way or the other during the last thirty years. For instance, ‘daka’ (abandoned) is about a Kashmir Pandit lady who is wandering in the Jammu streets to find out how she could reach Janipur where her younger son is living. “hatba me waentavjanipurkapaergatshaba”(Please show me the way to Janiur), the old lady was asking everybody in the street at Jammu, but no one understood her as she was speaking in Kashmiri. A Kashmiri Muslim, Rafiq, overheard her while going to his office and asked in a typical Kashmiri tone, “hatbimojitsekotchuigathunn” (O Mother! Where have you to go?). The lady tells him that she was thrown out of home by her daughter-in-law and asked to go to another son, MunnaJee, who was living in Janipur, but “I’m scared, he too might abandon me”. Similarly, ‘rawantyol’ (Pain of Loss) portrays the heart-wrenching story of Kashmiri Pandits who had to migrate from Kashmir and live in miserable conditions.

There are only two characters in the story—Ramesh and Rajnath. Ramesh in a nonchalant way speaks about the new life which he finds better than the earlier one in Kashmir. Now, he has two ration cards and full salary, no work and no worries: “We are free from destitution!” Ramesh said. Pat came the retort from Raj Nath, “O you broke! Do you call it luxury? We have lost everything. We have become lazy and lethargic. We’ve got disarrayed and have drowned in a filthy river!” Rajnath is reminded of the shades of Chinar and the way he would work in his kitchen garden. “Tears rolled down his eyes and he became motionless.”

In ‘How’s That’, Reshi is portraying his motherland and likens it to a cricket pitch where her players have been bowled out hit and hurt one by one. First, it was narrator’s ancestors who retired hurt because of the bouncers that straightaway hit their heads. Now, he while walking back home was crossing a road, he was hit and run out, scattering his brain on the road. ‘maajigobur’ (Mother’s Boy) is painful story which is so true and which all of have experienced over the years now. Javed, a militant, remembers the warmth and affection that he once enjoyed in the lap of his mother. His sisters would call him his mother’s boy as he would take refuge in the lap of his mother. Their mother would say, “Don’t tease him. Let him sit here.” The sisters in return would say, “What will he do when he goes out of Kashmir?” The mother would say that he would learn to live when the time came. “laejsasbalaiyi chu myontothjigar”, the mother would say. “laejsasbalai” (literally: may I be sacrificed for him) contains in itself the entire motherhood and her wholehearted selfless affection for her children.

Rendering it in English is just impossible as it is charged with our cultural traits which are peculiar and unique to us. However, Javed is now a wanderer over hills and mountains and hasn’t seen his mother for the last five years. He was no longer the same scared child who would run to his mother on hearing sound of a thunder. He produced such sounds himself and had become stone-hearted. Sooner than later, Javed realized the uselessness of his activities that only harmed people. He started to part his ways, but his friends didn’t like this. Calling him the mother’s boy, they filled his stomach with bullets.

Similarly, ‘sodah’ (merchandise) is about Kashmir. Symbolically, a reference to the way Kashmir was sold and bought earlier, but now it is the selling and purchasing of education. Mohammad Akram had got his daughter, Mehvish, admitted in DNR School, but the Report Card that he got was from AV School. He was surprised, but his wife told him that DNRS must be affiliated to AVS. She told him that their elders (moqdam) also had affiliation with people across the border. Aziz Sahib was calmly listening to the arguments between Akram and his wife. He informed them that the DNR School had been sold along with children. This shocked the couple, saying that Aziz had lost his mind. How could somebody else sell their children? Aziz laughed at the ignorance of the couple and told them why they should be surprised: “People were sold earlier also and they are being sold even today.”

It is Kashmir and Kashmiris that Mohiuddin Reshi is talking about. He is a sensitive writer who feels the pain and wails for how things have changed from bad to worse. Every one of us has got affected, in one or the other, by the conflict that has engulfed us for ages now. He is a painter of words and his canvas is very large. On this canvas are mass graves in ‘wushner’, our lost cultural traits in ‘rowmut’ (Eg., badamvaer, sheenajung, sot chai and Mogael Chaietc), the chaotic city life in ‘Wazul Nab’ and ‘JhandasBadlyov Rang’, the devastated life of our young boys in ‘Girdaab’ who go out of Kashmir for better prospects but get entangled in different problems, and so on. He paints images that are taken from real life, His characters are like you and me talking our language and feeling the pain like us. Reshi doesn’t come in between his characters.

He leaves them on their own so that they reveal their mind and they reflect on how ‘naked’ the truth is and how tattered the attire has become! As a skilful story writer, Reshi has used his mother tongue in its simple form without ornamenting it with unnecessary similes and metaphors. His is the language of the commoners that is easily comprehensible. Reshi avoids ambiguity and unnecessary phraseology. He writes like the people’s writer who is conscious of his audience and their linguistic and communicative capacities.

‘Nethanaen’s is an invaluable contribution to Kashmiri literature and should be read with great interest.