Notes of a Jihadi on books like Blackwater: The Army of Antichrist

Coca-Cola’s bright red logo, splashed across half a page. That’s the image that screams out from the dense exegesis on global jihad that is Maulana Asim Umar’s book Blackwater: The Army of Antichrist. Just below is the logo again, this time as its mirror image. “Look,” writes the cleric who heads al-Qaeda’s branch in the Indian subcontinent, “it reads, ‘Without Muhammad’, and ‘Without Mecca’.” 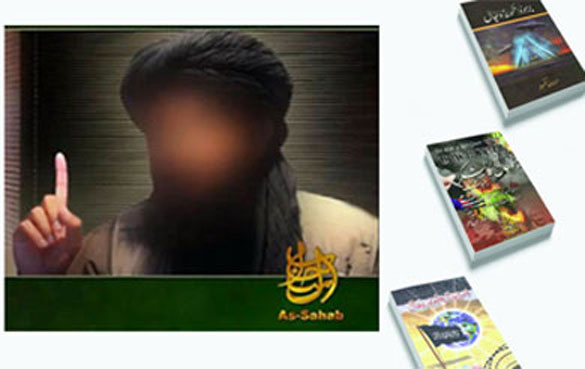 Covers of books authored by Maulana Asim Umar. His Dajjal, printed on high-quality paper, has run into eight print editions in Pakistan.

Maulana Umar’s writing, arguably the largest body of intellectual work by a South Asian jihadist, does not contain exhortations to become suicide bombers, or to behead unbelievers. Instead, it calls for the dismemberment of the modern world itself.

Early on September 4, India time, al-Qaeda leader Ayman al-Zawahiri had issued a video announcing the formation of a new wing of his terror group, dedicated to waging jihad in the subcontinent. The Jamaat Qaidat al-jihad fi’Shibhi al-Qarrat al-Hindiya, or Organisation of The Base of Jihad in the Indian Subcontinent, would be led by Maulana Umar, al-Zawahiri announced.

Last month, The Indian Express was the first to report that Maulana Umar could be an Indian national. He is said to have studied at the famous Dar-ul-Uloom in Deoband — the seminary, however, said its records don’t show him as a student — before emigrating from the country in the late-1990s.

As his books show, for Maulana Umar, the Apocalypse is upon us — it is an experienced reality, not a metaphor.

The Dajjal, Maulana Umar continues, obtains power by obscuring the truth of our condition from us. “This so-called civilised world,” he writes, “is built on lies; so much so that even educated people take these lies to be the truth. Even if entire books were to be written about lies, propounded through the media of the disbelievers, their authors would soon tire”.

He notes that the “gravity of the Dajjal’s strife can be realised from the fact that even Prophet Muhammad used to seek refuge from his deceptive ability”.

Maulana Umar cites prophecy that the Apocalypse would be preceded by a time when “the sky would rain and the earth yield crops, but neither would benefit the people, who would face drought”. This, he says, is precisely what is happening, as a result of “policies concocted by the Jews”.

It is clear that there is an audience for Maulana Umar’s vision of the modern world as deceit: Dajjal, printed on high-quality paper, has run into eight print editions in Pakistan. Pirated reprints are on sale in several Urdu book shops in Delhi.

The Case for Jihad

How then ought the believer to address the age of the Dajjal? In an essay in the summer 2013 issue of the Taliban magazine Azan, Maulana Umar answered that question by laying out his utopian Islamist vision.

“My Lord,” he wrote, “has declared that if jihad was not carried out, the earth would be filled with Fasad, meaning that everything would cease to be at its Fiṭrah (natural state).” “There is no Fasad greater than the world being ruled by man-made law instead of Allah’s law! When this happens, the world is filled with Fasad! Even the animals and birds start crying out; the earth stops growing its produce.”

The action needed to secure this utopia was jihad, Maulana Umar said: “Whatever system dares to stand against the word of Allah, and whatever way of life is implemented contrary to it, must be destroyed… This earth belongs to Allah, so only Allah’s system will be implemented upon it.”

For Umar, democracy is a din, a system of faith, and thus in irreducible opposition to Islam. In Adyan ka Jang (War of Faiths): Islam aur Democracy, he wrote: “Democracy is one of the evils that has had a bad impact on the Muslim nation, replacing the system of Allah with an alternative that gives power to human beings, who are merely the creation of Allah. Democracy is evil and if you want to fight it, you have to destroy its four essential pillars: parliament, judiciary, civil bureaucracy and media.”

Ideas such as these are, in fact, rooted in the Islamist intellectual tradition. In 1939, the patriarch of South Asian Islamism, Abul Ala Maududi, argued that the existence of Allah meant “no one has the right to appoint himself ruler of men, (or) to issue orders and prohibitions on his own authority. To acknowledge the personal authority of a human being as the source of commands and prohibitions is tantamount to admitting him as a partner in the power and authority of Allah.”

Maududi argued that the pursuit of political power — rather than what he called “a hotchpotch of beliefs, prayers and rituals” — was integral to Islam. “Islam,” he wrote, “is a revolutionary ideology which seeks to alter the social order of the entire world and rebuild it in conformity with its own tenets and ideals.”

It was, therefore, imperative for Muslims to “seize the authority of state, for an evil system takes root and flourishes under the patronage of an evil government and a pious cultural order can never be established until the authority of government is wrested from the wicked”.

Maulana Umar’s success has been to make these ideas accessible to a conservative middle-class audience alarmed at the cultural strains imposed by modernity. In Dajjal, he wrote, “the tragedy of all Islamic societies is that they grow watching devilish Christian, Jewish and Hindu media… From childhood, our children are taught to dance to English and Hindi music. In fact, small children who are brothers and sisters are made to act in plays as husband and wife”.

It is necessary, Umar wrote, for parents to ask “why they are educating their children in these Christian schools, instead of Islamic schools”.

The Maulana has been adroit, too, in utilising the religious chauvinism within Islam. He cites an article by Jaish-e-Muhammad propagandist Ismail Sagar blaming a Shi’a soldier for abandoning his post during the Kargil war. He describes Karachi’s Muttahida Qaumi Movement as agent of the Dajjal, for supporting the right of Ahmadis to preach and pray.

Finally, there’s paranoiac nationalism: Umar claims the US is using the security firm Blackwater to fulfil a secret Jewish agenda to destroy Pakistan, which he claims was authored by the Zionist leader David Ben-Gurion.

Experts say there is enough in Maulana Umar’s work to suggest it has been written by an Indian, or by someone who has lived in India for long. All his images online are digitally masked, suggesting, according to experts, a desire to hide — an impulse that is generally missing in the rest of the top jihadist leadership in Pakistan.

On September 4, al-Qaeda leader Ayman al-Zawahiri issued a video announcing the formation of the Jamaat Qaidat al-jihad fi’Shibhi al-Qarrat al-Hindiya, or Organisation of The Base of Jihad in the Indian Subcontinent, a new wing of his terror group dedicated to waging jihad in the subcontinent. The new wing, he said, would be led by Asim Umar.

Investigators running checks on Asim Umar’s background have questioned several figures linked to the Islamist movement in India in the 1990s, specifically the now proscribed SIMI. He is believed to have reached Pakistan in the late-1990s, where he joined the Jamia Uloom-e-Islamia, a Karachi seminary, which counts among its alumni Maulana Masood Azhar of the Jaish-e-Muhammad, Qari Saifullah Akhtar, who headed the Harkat-ul-Jihad-al-Islami, and Fazl-ur-Rehman Khalil, the leader of Harkat-ul-Mujahideen. Asim Umar was mentored by Nizamuddin Shamzai, a cleric closely linked to the Taliban.

After finishing his studies, Maulana Umar is believed to have joined the Harkat-ul-Mujahideen and served at its training camps in PoK, and taught at the Dar-ul-Uloom Haqqania seminary in Peshawar. He lived again in Karachi from 2004 to 2006, and wrote a lot of his bestselling jihadi literature. After General Pervez Musharraf stormed Islamabad’s Lal Masjid, run by Umar’s old friend Abdul Rashid Ghazi, the Maulana shifted allegiance to al-Qaeda, and established links with Muhammad Ilyas Kashmiri.

In 2013, Maulana Umar spoke directly to Muslims in India. In an essay in the jihadist magazine Azan, he said: “The global jihad leadership feels justified in asking Indian Muslim scholars and masses as to why the jihad battlefields remain deprived of their blessed presence — especially when history shows that their ancestors always raised the banner of jihad against the enemies of Islam.

“The Red Fort in front of the mosque cries tears of blood at your slavery and mass killing at the hands of the Hindus… Is there no mother left in UP who can sing to her sons the songs that would inspire them to decorate the battlefield of Shamli instead of wasting their times in marketplaces, parks and sports fields? Have the inheritors of Shaykh-ul-Hind left out hijrah and jihad from their lives forever? Has the land of Bihar become so barren that it is unable to produce even one Jama’ah of the likes of the Mujahideen of Azeemabad? And which Kafir’s evil sight affected the land of Bengal that the eyes of history became weary awaiting another Siraj-ud-Daulah?”

Days after it was formed, al-Qaeda in the Indian subcontinent claimed credit for its first operation: an audacious bid — which was ultimately repelled — to hijack a Pakistani warship at the naval base in Karachi, and to turn the vessel against a US warship in the open seas. According to reports, four men, including one recently-sacked and two serving naval personnel were killed in an intense fire fight on or around the warship, PNS Zulfiqar.  In a statement, al-Qaeda said, “The naval officers who died on Saturday in the attack in Karachi were al-Qaeda members. They were trying to attack American marines and their cronies. It was after they read the Quran that they agreed to leave the Pakistan military, which is a crony of the US, and undertake jihad. They were trained in training centres of the Qaidat al-Jihad in the Indian subcontinent, and given a plan to attack (the ship) al-Zulfiqar and take the missiles, with which they were to attack an American carrier”.