Religion as a Protector of Environment

1.    The relationship between Islam and nature has been an under researched topic and Green Mosques can help reduce water consumption and emission of Green House gases.

2.    The Green Muslims can certainly play an active role in the water conservation by adopting Wudu (ablution) method that consumes less water, which can later be recycled or used in irrigating the plants.

Green Deen: What Islam Teaches About Protecting The Planet 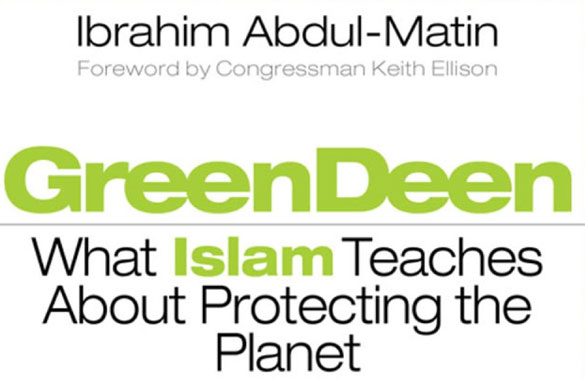 The concept of nature as sacred has been prevalent in various Asian religions like Hinduism, Buddhism. This sacredness and element of divinity has bestowed nature, its resources and manifestations with transcendental temptation for humans or believers of their creed. It resulted in animism, worship of nature and its manifestations. Is there something divine about nature in monotheistic, Semitic and Abrahamic faiths too, particularly Islam? What is the worldview of Islam about nature, its resources and their optimum use? The present book under review written by environmental activist and Green Muslim Ibrahim Abdul Matin tries to answer these queries. The relationship between Islam and nature has been an under researched topic and this book fills the void. Further the book tries to address the fact that how faiths like Islam can help in protecting the planet, reducing pollution and conserving natural resources.

In his Foreword to the book, U.S Congressman, Keith Ellison writes, “Green Deen brings faith communities into the environmental movement by changing the conversation from the facts of global warming to the fact that we all live and work here together and have a collective responsibility to keep this place clean and safe for everyone”. (P-xiii)

Also Read:  Environment And Human Life Are Inter-Dependent in all World Religions

While praising the efforts of author and emphasizing the engagement of people in environmental conservation, he further writes, “Ibrahim is a man of faith, as many Americans are. In Green Deen, he talks to the same people Muslims, Christians, Jews, Hindus, Buddhists, environmentalists and many others who all see the value in the simple ideas that drove us to create a coalition in my home state Minnesota. We learned that environmental advocacy is not only the prerogative of the experts, politicians and the industry executives. Ordinary citizens can impact environmental policy, and Ibrahim reminds people of faith that their impact is important and very much needed. We the people can and must shape environmental policy. We can make the connections”. (P-xiv).

In his Preface, author Ibrahim Abdul Matin writes about the six principles that according to him determine Green Deen and their application that will help in practicing Green Deen in our lives. “I look at six principles as they apply to our relationship to the environment: understanding the Oneness of God and His creation (Tawhid), seeing signs of God (Ayat) everywhere, being a steward (Khalifah) of the Earth, honouring the trust we have with God (Amanah) to be protectors of the planet, moving toward justice (adl), and living in balance with nature (Mizan). These principles are the rubric upon which I am determining what constitutes a Green Deen-that is, living and practicing Islam while also honoring the environmental ethos of Islam” (P-xix). Those Muslims who practice these principles are known as Green Muslims.

The book is divided into four parts and focused on Muslim Americans because Ibrahim is a Muslim American, thus he quotes American examples but they have universal appeal and application despite local context. Green Deen begins with self reflection, evolves to expressing relationship between faith and environment. These small facts of faith like eating a balanced diet, keeping the surroundings clean, living with austerity have been analyzed in such a lucid manner that their viability becomes self evident. The problems of overconsumption, how it results in pollution and climate change have been explained vividly.

Ibrahim explains the conservation movement, Green Muslims and their contribution to the environmental movement. Ibrahim then talks about Green Mosques, and how they can help reduce water consumption and emission of Green House gases. He has developed a unique terminology wherein he talks about renewable sources of energy as Energy from Heaven and Non-renewable sources of energy like Oil and Coal as energies from Hell. Ibrahim emphasis about consuming less plastic, Styrofoam and energies from Hell. He is critical about oil spills and mountaintop coal mining. He further talks about the initiatives towards protecting environment, reducing toxic pollution of water, lakes, rivers, seas and groundwater.

Also Read:  Climate Change and Environment Conservation – Concerns of Islam, Christianity, Hinduism, Judaism and Other Faiths Are the Same

The Green Muslims can certainly play an active role in the water conservation by adopting Wudu (ablution) method that consumes less water, which can later be recycled or used in irrigating the plants. The kitchen and backyard gardens can certainly be used for growing food that will decrease the dependence on organic, genetically modified or hormone raised foods. Ibrahim further suggests that through this environmental advocacy and activism interfaith dialogue has become much easier, simpler and possible.

Overall the book is a welcome addition to the field in which there is a dearth of literature that seeks to emphasize the pragmatic utility of religion in preserving the planet. Some of the inferences and examples will take time to be universally applicable in all Muslim communities like Green Mosques but these examples do depict that a cleaner, greener and less polluted world is still possible. Ibrahim’s efforts need to be appreciated and lauded as he has depicted that Islam is not a mere superstitious belief system but if practiced in its letter and spirit it certainly can help in protecting our planet. The utility of the book makes it eligible to be translated in major languages of the world.