Spirituality as a topic is deeply associated with religion. Islam also aspires for the spiritual development of its believers. A distinct school of thought known as Sufism that emphasizes most on the spiritual aspect of Islam, evolved among Muslims. Given its evolution in the time of political crisis it focused mainly on the spiritual development, cleansing of hearts and purification of souls that ultimately led the believer to experience the divinity of God. It focuses on training the believers to experience the contours of divinity through various practices and exercises. Maulana Wahiduddin Khan, a prolific writer on Islam in his new work has delved and engaged with this important aspect of Islam. In his Foreword he writes about the scope and subject matter of this book in these words, “I hope it will give the reader a vision, facilitate clearer thinking and establish the principles of personality development. I hope it will help him defuse his stress, de-condition his conditioning and enable him to rediscover the course he should take a lead a successful life.” (P-7) Unlike his other academic works it can be constructed as a self-help book. 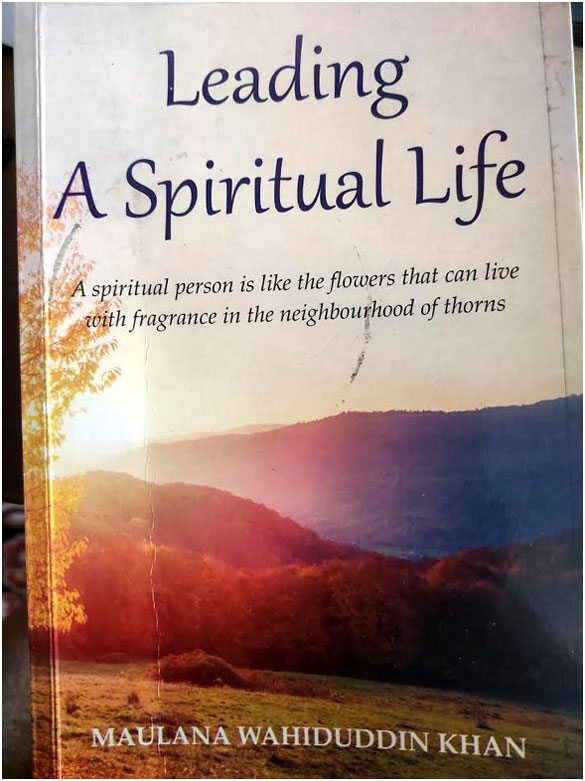 The book is divided in many parts and contains scores of articles that deal with various dimensions of spirituality understood in a common parlance. Spirituality as its practitioners describe can be experienced by anyone irrespective of his belief system, religion, gender or language. This aspect becomes evident as the reader progresses through this book. Maulana despite being an Islamic scholar has not used solely Islamic weltanschauung or idiom to describe spirituality but lived experiences and everyday observations that have a universal appeal.

Maulana takes cue from nature, environment, important personalities, biographies and his vast reading to describe and derive spiritual lessons. So he states that we should adopt the culture of trees. Trees stay where they are despite the change of seasons. Maulana advocates mind based spirituality that takes contemplation instead of just meditation in account. So that paves way for applied spirituality instead of an escapist one. Hence spiritual behavior is friendly behavior towards all which emphasizes forgiveness instead of revenge, self restrain and not losing the temper.

The lesson of all humanity being one family is a lesson that we have heard since childhood but how spirituality can construct such an environment is depicted by Maulana. In such an environment borders become irrelevant, spirituality beginning from an individual makes one duty bound and responsible towards others. The failure to produce dutiful, responsible and conscious citizens is what leads to conflicts and problems in the society. The formal mainstream education has failed to produce such citizens so informal education will certainly help fill the void. This change will be ushered non violently and through education. “Social change cannot be brought about by demonstrating on the streets. It is brought about by changing people at the intellectual level. Social change, after all, is an issue not of street activism, but of intellectual activism.” (P-117)

Maulana believes that stress and tension cannot be avoided in life and they are good only if people know how to deal with them. So leaving comfort zones and accepting intellectual challenges makes one strong and creative. Thus hard work is the road to success not a life of comfort that has no challenges. There are no short cuts to hard work and through it only one can achieve great feats. Critical thinking is the constructive thinking and there is need for dealing with all situations with controlled emotions. Thus adjustments are needed that make life easy to spend. The progress of an individual and a nation also requires the proper utilization of time, a resource that is least valued by people. Further being realist helps in getting over rifts and tussles with others particularly in case of marriage. Marriage for Maulana should comprise of spouses who are intellectual partners too. Also negotiating with problems requires taking a cue from cow culture that turns non milk products into milk so non peace, non desirability, tension and stress needs to be converted into peace, desirability and mental solace.

A concept of De conditioning has been articulated by Maulana in his writings. It means to take people out of their comfort zones, environment, family upbringing and making them understand the real purpose of life. It is a continuous process and every great person went through this process. De conditioning is needed because everyone is surviving in a self contradictory mode. “A tension-free mind is one that can function positively in spite of a contradiction. People work, but find no job satisfaction. They earn money but experience no inner satisfaction. They live by the formula: ‘Enjoy life!’ But they don’t know what life is or what real enjoyment is. It is a paradoxical situation. Everyone is living in this state of self-contradiction.” (P-179)

The other issues dealt in this work include learning from the experiences of others, celebrating the power of resilience among humans and grabbing new opportunities if the previous ones have been lost. Maulana says that a nation can only progress if they contribute towards the common good of humanity, instead of being just consumers and receivers. Most Eastern countries and the muslim minorities are feeling threatened that they will be assimilated by the majority, but if they are contributors then it is impossible for them to be assimilated. Infact they will be cherished and celebrated for their contribution towards the collective good.

This book is a unique contribution of Maulana to the genre of self help. The book is an easy read and every article has some insight to offer that helps the reader to learn something new while offering a different perspective on issues that are overlooked. It is a must read for anyone interested in improving their vision and perspective about life.