From A Traditionalist Perspective, Commentators Desacralise the Holy Text by Applying To It Modern Hermeneutic Techniques 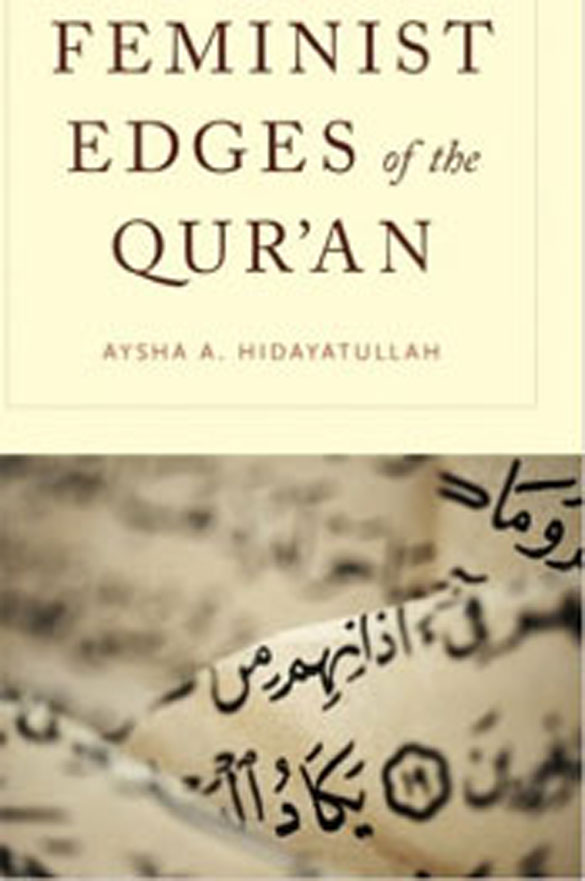 Feminist Edges of the Qur'an

By Aysha A. Hidayatullah (Author)

RECENT SCHOLARSHIP on Muslim women gives us a far more balanced picture than the one often found in the popular media. It shows that throughout Islamic history in Asia, Africa, and the Middle East, when it came to the transmission of religious knowledge, Muslim women have been neither totally marginalized nor pioneering scholars. In Feminist Edges of the Qur’an, Aysha Hidayatullah explores a recent, lively, and somewhat turbulent chapter in this history. She studies the works of Muslim women who have produced commentaries (Tafsirs) on the Qur’an in the past half-century. These women write in a variety of languages (including English) and come from remarkably diverse national, cultural, and disciplinary backgrounds. Hidayatullah’s study shows that despite their many differences, these women scholars share one common objective: challenging the male monopoly over the interpretation of the Qur’an. Yet holding on to such a revisionist position has not been easy for these scholars.

Admired by thriving young Muslims who have found access to higher education in parts of the Middle East and South Asia in recent decades, these female religious scholars nonetheless face hostility from hardcore traditionalists, who view them as contributing to anti-Muslim Western narratives. From a traditionalist perspective, these commentators desacralize the holy text by applying to it modern hermeneutic techniques. Further, from the same perspective, the revisionist interpretive methods, feminist ones included, have another major problem: they are indifferent to the principles of Qur’anic exegesis and the rules of interpretation established by the oft-mentioned — though never quite defined — “Arabic-Islamic heritage.” In 2010, Abd al-Latif al-Shafi’i, a scholar of the Qur’an at the University of Cairo, deemed these commentaries “dangerous”; as far as he was concerned, they “polluted” the air the younger generations of Muslims breathe.

At the other end of the spectrum, where Muslim women scholars working on gender justice are supported by colleagues coming from the Western feminist tradition, roads are not necessarily easier to negotiate. Here numerous Orientalist myths — such as Muslim women’s total lack of individuality and the assumption that the average Muslim woman is always ready to be infantilized and carried to freedom — still prevail. Furthermore, for women scholars of the Qur’an who self-identify as Muslim, demonstrating their academic impartiality and dedication to gender justice remains an additional burden.

There are myths and hasty generalizations on both sides. For example, for many non-Muslims, removal of the hijab serves as a marker of democratic values, while on the Muslim side, collaborating with Christian or Jewish feminist’s signals neoconservative politics and indifference to the painful experiences of Muslims after 9/11.

It is under these circumstances that Hidayatullah takes stock of the work Muslim women commentators on the Qur’an have done so far. Her book hits the market amid the emergence of a new “Islam vs. the West” symbol: masked figures brandishing sharp weapons or beheading journalists on global networks. These acts of violence signal a Muslim lack of interest in debate and transform any study of the Qur’an into a political act fraught with ideological pressure as well as responsibility to educate the misinformed.

Hidayatullah is up to the challenge. Feminist Edges of the Qur’an is not a diatribe against Islam, the West, religion, or secularism. It is a genuine academic effort to review what has been achieved and what needs to be done if the commentators on the Qur’an are to go anywhere from here. The book is divided into three sections: the historical emergence, the methods, and the critiques of feminist Qur’anic interpretation. Hidayatullah does not just celebrate the works under discussion, but rather questions their efficacy, and generates new debates.

Hidayatullah’s most admirable effort is her attempt to summarize and delineate the vast interpretive work dedicated to the Qur’an throughout the history of Islam, and across its wide geography. This includes explicating methodologies such as historical contextualization and intra-textual examination of concepts. For example, the approach taken by a linguistically oriented commentator is different from the one employed by a commentator focusing on the body of prophetic sayings. Similarly, the approach used by a legal scholar is different from that of a mystic who opts for an allegorical reading of the holy text.

Historicizing the practice of Qur’anic commentary, Hidayatullah points to the fact that interpreting a text is relative to the historical and methodological circumstances within which the text has been shaped. Over centuries, Muslim authorities, like others, have drawn lines around what they’ve perceived to be the inviolable “centre” of the Islamic tradition; they’ve tried to seal it off from what they consider to be “deviations” in thought and practice taking place at the edges. What they forget, or choose not to remember, is that much of what lies now at the centre has at some point or another developed at the edges. Indeed, a close look at the enormous Qur’anic commentary demonstrates more difference than agreement among the many interpretative approaches.

While Hidayatullah does not clearly articulate this point, her work generates hope and excitement for acts of revision. Since what is at the centre of any tradition usually consists of fully formed thoughts and practices, why not explore the unconventional edges where the differences of opinion lie and exciting new ideas are to be found? From this perspective, the feminist readings of the Qur’an now deemed “dangerous” and “polluting” by those who revere the centre, are in fact the most fertile ground for new understandings of the Qur’anic text. Furthermore, since all that is at the centre now has come there from the margins, it is conceivable for these feminist readings of the holy text to someday occupy a revered and established position.

While interpretation of the Qur’an as a whole is a well-established field, Hidayatullah wants us to see that its feminist- or gender-conscious offshoots are on a new and unpaved road. It is not even clear how to define these gendered commentaries as a subfield. “Women’s Tafsir” runs the risk of assuming that all women would read the Qur’an in the same way. “Feminist Tafsir” suggests a close link with Western gender theory, which bars the local and communal actions of Muslim women from being included in the field. If we call these commentaries “A gender-just reading of the Qur’an,” we are assuming that women commentators single out the gender-related verses in the Muslim scripture as the sole focus of their works (while in fact, they often analyze the Qur’an in its entirety to provide the proper context for their specific subject). In the end, Hidayatullah decides to move the emphasis from the field to the Muslim women commentators themselves in order to foreground their agency and highlight the challenge they pose to what she sees as the “abuse of male power in the interpretation of the Qur’an.” She calls them “feminist exegetes.”

Providing short biographies of these feminist exegetes, Hidayatullah highlights their diversity in terms of age, nationality, and disciplinary affiliation. The group is impressive: from theologian and activist Riff at Hassan to legal scholar Azizah al-Hibri, and from political scientist Asma Barlas to Amina Wadud, philosopher and prayer leader of mixed-gender congregations. Hidayatullah also gives us a perspective on their preferred methodologies. For some, the Tawhidic approach works best, where the core argument hinges on Tawhid (God’s oneness). Sexism cannot be justified if God is one and He alone has sovereignty over all creation. No human being can be superior over another. Giving men the authority to rule over women is committing shirk, “assigning partnership to God.” While highlighting the diversity of approaches, Hidayatullah keeps us aware that the terminology of Islamic feminist discourse is too deeply enmeshed with local political struggles. Generalization is difficult.

Last but not least, Feminist Edges of the Qur’an takes the courageous stance that while feminist exegetes highlight aspects of the Qur’an that support social justice and equality, they also need to acknowledge that there are other Qur’anic pronouncements that do not. In Hidayatullah’s view, until and unless women acknowledge such incompatibilities, they won’t be able to provide commentaries viable for the 21st century.

Feminist Edges of the Qur’an has flaws as well. For example, although Hidayatullah gives us brief accounts of the commentators’ diverse backgrounds, she frequently speaks of the perspectives and attitudes of the “feminist exegetes” as if they formed a homogenous group with no significant differences with one another. Similarly, she criticizes the limitations of the current interpretive canon because of its focus on Sunni thinkers and on materials written in English. Yet she, too, focuses almost exclusively on Sunni figures, with no reference to major Shiite reformists.

Analyzing the women exegetes’ views, Hidayatullah sometimes oversimplifies complex perspectives, such as those put forth by Amina Wadud, who has proposed the so-called “triad model.” According to this model, God is situated above men and women, maintaining a near-identical relationship to each group, whereas men and women are in a horizontal (non-hierarchical) relationship with one another. Hidayatullah opposes this model and argues that “there is something irreducibly different about each vertical relation to God.” As she sees it, the model does not lead to gender equality. Yet this is the crux of Wadud’s argument: even though men and women may hold different positions (as far as their relationship with God is concerned), the difference does not put them in a hierarchical relationship with regard to one other.

Elsewhere Hidayatullah presents thought-provoking ideas that, in fact, are variations on themes developed by others. For instance, she calls for forms of justice beyond the pronouncements of the Qur’an, an important and daring idea. However, this is a reformulation of Wadud’s notion that “we are the makers of textual meaning” in the Qur’an. Wadud’s model has moved the emphasis from the text to the agency and responsibility of the reader. The Feminist Edges of the Qur’an does not give it the acknowledgment it deserves.

In more general terms, throughout the book, Hidayatullah builds our hopes for a grand finale — a breakthrough of sorts. Then the conclusion, quite anticlimactically, presents us with mere variations on familiar themes.

Still, Feminist Edges of the Qur’an does offer dynamic ideas such as the “interdependence” of the sexes, which signal a shifting balance of power between men and women. Hidayatullah’s objective is not to idealize certain passages from the Qur’an or to criticize others. Her goal is larger: reminding us that the dichotomies of male control and female passivity must be perpetually disrupted. Last but not least, the book remains a careful summation of the development of Muslim feminist hermeneutics through the ages.

Fatemeh Keshavarz PhD is an Iranian academic, Rumi and Persian studies scholar, and a poet in Persian and English. She is the Roshan Chair of Persian Studies and Director of the Roshan Institute for Persian Studies at the University of Maryland since 2012, where she also directs the School of Languages, Literatures and Cultures.