As the government in Pakistan completes its first year in office, the Afghans move to the second round of their presidential elections and the US and NATO forces potentially pack their bags, a brilliant Pashtun journalist has released a book that not only raises the Pashtun question but also pledges to provide the key answers, if not the key, to the future of Pakistan and Afghanistan. Abubakar Siddique hails from South Waziristan, FATA, and works with Radio Free Europe out of Prague. Siddique states off the bat that, “the failure of both Islamabad and Kabul to incorporate the Pashtuns into state structures and the economic and political fabric has compromised the security of both countries”. His emphasis throughout the book indicates that this statement is applicable predominantly to the Pashtuns who straddle the Durand Line. 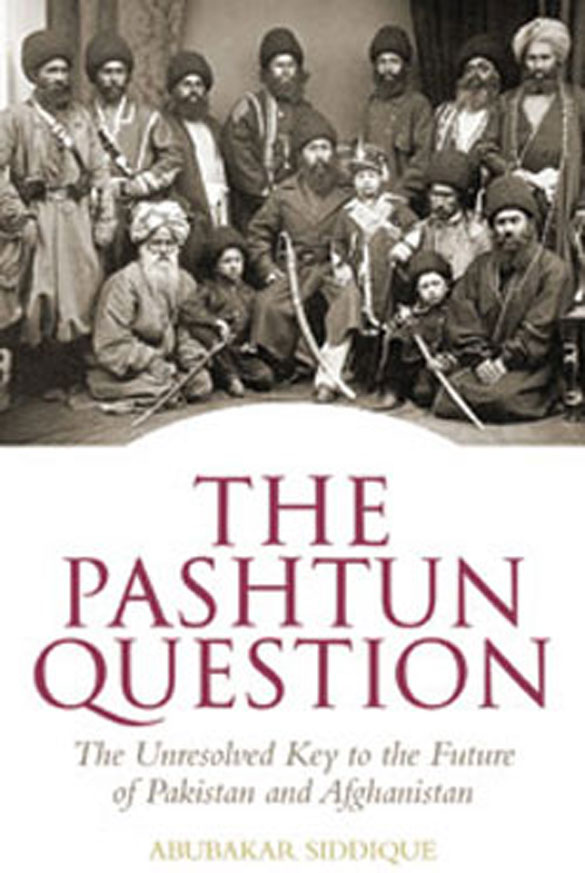 The Pashtun Question is a fast-paced crash course in the contemporary history of Pakistan and Afghanistan relations and the failures of both states. The flawless language, the quirky subtitle ‘unresolved key’ notwithstanding, makes the account eminently readable and does not let the boatload of facts, events, people and dates cited bog the reader down. The volume is divided into four sections: 1) the theatre of conquest, which covers in some depth the Pashtun socio-political history and tribal organization, 2) Pakistan, which focuses on the ongoing war in Waziristan and other tribal agencies, the terror unleashed in Khyber Pakhtunkhwa and the Afghan Taliban sanctuary in Quetta under the Deobandi clergy and the intelligence agencies’ tutelage, 3) Afghanistan, which covers the three prongs of the Afghan Taliban militancy in the three south-western swathes of that country viz. the Loy Nangarhar,  Loya Paktia and the Loy Kandahar regions, and 4) conclusion, which aims at “crafting a peaceful Pashtun future” by making geopolitical recommendations to the US, Pakistan and Afghanistan.

The single most important part of the book perhaps is the very last subsection titled ‘A Permanent Peace’, which posits: “True stability will not be possible without a comprehensive settlement between Afghanistan and Pakistan” and “sooner or later the countries will have to come to terms over the question of the Durand Line”. Siddique accurately notes that the official Pakistani position is to claim the Durand Line as a valid international boundary while Afghanistan passionately rejects that claim. He cites the Afghan foreign ministry’s 2012 rebuke to the US special envoy Marc Grossman that Kabul “rejects and considers irrelevant any statement by anyone about the legal status of this line”. Siddique states, “A future Afghan government will likely have to modify Kabul’s hard-line position on the Durand Line to reach an accommodation with Islamabad.” He duly notes the reluctance even of the Taliban regime, and obviously of the pre and post-Taliban governments, to acquiesce to the Pakistani position on the Durand Line issue. He does mention some Afghan officials considering the possibility of presenting the issue to a Loya Jirga.

Abubakar Siddique correctly identifies that there is no Pashtun secessionist movement in Pakistan, the mainstream Pashtun nationalist parties have been participating in the country’s parliamentary politics for decades and “their demands never went beyond calling for provincial autonomy within a federal Pakistan”. Siddique cites domestic reasons such as internal displacement of the Pashtuns in Pakistan and rewards from a robust cross-border trade for Pakistan to consider an open border policy that in due course could allow the border Pashtuns to have legitimate dual citizenship. Siddique’s answer to the Pashtun question seems to be a two-state solution, in which “Kabul could show goodwill by indicating to Islamabad it is ready to consider a historic compromise. He suggests, with a lot of substance, that Pakistan has been the ultimate beneficiary of keeping the Durand Line in limbo and that it may just be time for Kabul to cut its losses. Siddique has proposed that Afghans should open a public debate on whether they stand to lose or gain from such a bargain with Pakistan. One certainly wishes that the author had devoted more space to what seems to be the crux of his thesis than cramming it into the last few pages. Perhaps a more thorough inquiry into the origins and future of the Afghan-Pakistan border dispute was in order, especially about he fact that the 1893 Mortimer Durand-Amir Abdur Rehman Agreement had lapsed last year.

The author notes, “Pakistan has begun a tentative process of reform of its foreign and military policies” and cites the much trumpeted changes in its army’s Green Book, and the former army chief General Ashfaq Parvez Kayani’s 2012 speech mentioning extremism as the gravest threat to Pakistan. He hopes that something similar to the Turkish foreign policy peg “zero problems with the neighbours” and its rectification of the civil-military imbalance, could flow from the Pakistan army’s course correction. Siddique also expresses a rather curious optimism that “most Islamist leaders have in Pakistan recognised the dangers posed by the radical ideologies of al Qaeda and the Pakistani Taliban”. Just looking at last month’s events in Pakistan where religious zealots agitated in favour of the intelligence outfits after a journalist narrowly escaped death, the Afghans could not be blamed if they did not share Siddique’s optimism. For the Pakistani security establishment to win Kabul’s confidence for a permanent solution to the border dispute, it will have to do much better than its duplicitous policies vis-à-vis the jihadists and Taliban of all shades, which Siddique has so thoroughly documented throughout the book.

Abubakar Siddique has produced a work brimming with information and his publisher would be remiss not to swiftly release an e-book edition making life easier for both the wonks and the general readers. One can disagree with Siddique’s take that the Afghan “Taliban’s role in bin Laden’s global jihad was never more than nominal” or when he underplays their Faustian bargain with the Pakistani intelligence but there can be no doubt that his is a genuine endeavour to look for solutions beyond military options that are anchored in the soil, not the ideology. His motivation seems to be the Pashto saying that he recalled at one of his book events: no matter how high a mountain, there is always a way over its top (Ka Ghar Jag De, Pa Sar Ai Laar Shta). This indigenous attempt to tackle the uphill task the Pashtuns and Afghans face today ought to be welcomed. Abubakar Siddique deserves a pat on the back for raising the Pashtun question at such a critical juncture.