Pakistan on the Brink: Ahmed Rashid Holds Political Class Responsible For All That Ails the State Today 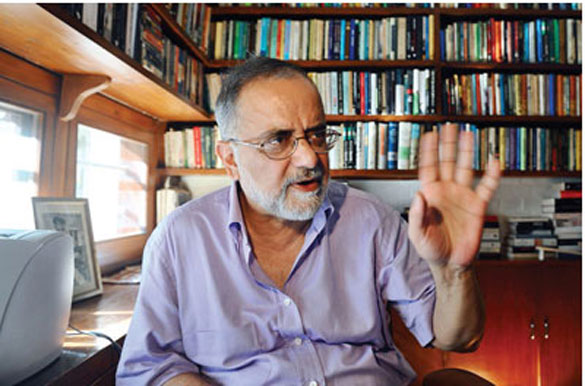 Pakistan on the Brink

PAKISTAN SEEMS to be developing uniqueness as a crisis-prone state, lurching from one crisis to the other, however, without collapsing. Ahmed Rashid’s Pakistan on the Brink: The Future of Pakistan, Afghanistan and the West is a worrying account about what might be in store for the country unless some fundamentals are set right. It is a highly unstable country, vulnerable to terrorist violence, radical political change and economic collapse. It is not yet a failed state, but sliding down the path to becoming one.

Rashid, in an easy-going narrative, weaves together the complex interplay of factors responsible for the crises in the region and the difficulties that the US faces in dealing with Pakistan and Afghanistan. Their growing political turmoil, the breakdown of social contract, simmering ethnic conflicts, increasing war between modernity and extremism, a Taliban trying to take over the state and a military with declining credibility: all contribute to the weakness of the state. Pakistan’s economy is in a serious crisis with a GDP growth at barely 2.6 percent, high inflation, a fiscal deficit of over 5 percent and a debilitating power crisis. Debt servicing and defence take up 60 percent of the budget. Borrowing from banks has become the norm, without giving any thought how to generate domestic revenues.

Written in the context of the anticipated withdrawal of NATO-ISAF forces in 2014, the focus of the book is on the current plight and the solutions needed to ensure future peace. Rashid’s prediction is that the US exit from Afghanistan and the following transition there will be extremely difficult. He raises questions about Afghanistan’s survivability and Pakistan’s future, with all its problems and nuclear weapons. Rashid argues that the region is beset with crises that are getting worse, but there’s still time to rectify the situation.

The US has to get its strategy right. Given that a military option does not exist, a political strategy and dialogue are necessary. It must strive for a comprehensive dialogue with the Taliban. And it must build a more stable relation with Pakistan. Since the book was written in 2011, on both counts there has been a sharp deterioration. That a major confrontation between the US and Pakistan was inevitable was pointed out in his previous book Descent Into Chaos. The military’s growing belligerence towards the US does not make sense as it is dependent on American go odwill for its economic survival.

The military spurns any change in strategic thinking, as it will undermine its own vast economic interest, its large share of the budget and its overwhelming influence on foreign policy. Unless both the military and the political class put change and reform on the agenda, Pakistan will face a loss of political control, with growing anarchy and violence, enormous economic catastrophe, and the ever looming threat of militant Islam that could overwhelm the security apparatus. Pakistani generals seem oblivious to the fact that ending the Taliban insurgency in their country and helping stabilise Afghanistan should be a higher priority than countering an imagined Indian threat.

Rashid’s book should serve as a mirror to the ruling class of Pakistan. He argues that Pakistan must act as a normal state and to function like one, Pakistanis need a new narrative from their leaders, one that does not perpetually blame the troika of India, the US and Israel for its own ills. The elite must take responsibility for its mistakes, and not expect outsiders to bail them out of a mess of their own making. They also must reflect on the ways in which they must ensure Pakistan’s or its people’s security.